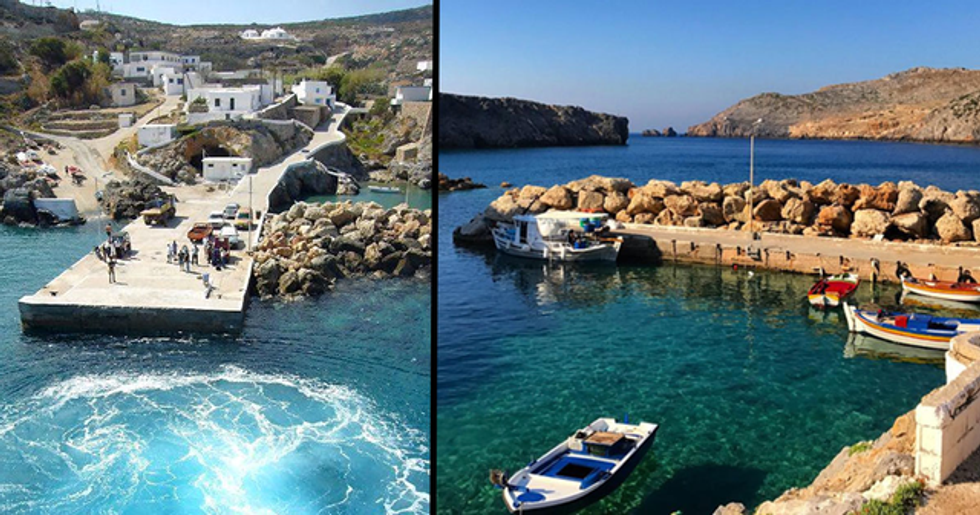 Sick of the mundane 9-5 life? Find yourself dreaming of escaping to an exotic island far, far away from here?

Okay, I swear that this article isn't a corny advert that was written in the 1950s. But it may make you want to quit your job. I can't promise anything.

One beautiful island off the coast of Greece is offering to pay people to live there. That's it. No catch! Keep scrolling to read the details, I'll be expecting a postcard when you move.

We all dream of moving to a mysterious land far, far away...

Well. Sometimes we do. When the going gets tough (which is every single day in my job...), it's quite easy to daydream about packing your bags and just clearing off to an exotic island in the middle of nowhere.

Though moving a couple of blocks down the road may be more realistic...

Because who has the money to move to an exotic location that's halfway across the world? Not me, that's for sure.

Well, what if I told you that you could get paid to move?

I'm sure you've heard of this kind of thing before... Some exotic location in the world is offering a silly amount of money for someone to relocate and settle down there.

And there's usually an even sillier catch.

Like the time that one Greek Island offered people money to move there... It sounded too good to be true until you found out that you'd be living with fifty-five cats.

A cat sanctuary on the Greek Island of Syros was on the hunt for someone to move there to look after their fifty-five feline inhabitants. The job role involved feeding them, cleaning up after them, and giving them their medication.

Spending your days on a gorgeous Greek Island surrounded by a load of cats... It doesn't exactly sound like the worst life, does it? Probably not good enough to make us go for it though...

Or you could just be forced to have loads of babies...

Yep. One rural Italian village was offering people money to move there simply to repopulate the place after a load of people died.

Not exactly what you look for in a new neighborhood, is it?

The tiny Alpine village of Locana, which is situated in the northwestern region of Italy, was willing to pay up to $10,200 over 3 years to families willing to relocate there.

Each year in Locana, there are forty deaths versus just 10 births. So, apparently, it will pay newcomers more than $1,000 per child to make babies. Again, not the worst catch in the world, but that life just isn't for us...

And for those who can't be bothered with the responsibility of children...

Not all of us fancy popping out several kids with the aim to repopulate a small Italian village. Even if you do get over $1,000 each go.

There are some Italian villages flogging houses for a dollar.

No kids involved! If an authentically-crumbling Italian villa in either Campania or Sicily is your slice of cake, you can get them for as cheap as $1.

There's always one, isn't there. Some of these houses may need renovating. So the overall cost of fixing the place up will probably come to the cost of a regular house, anyway. Ah well, can't say I didn't try.

But there is one island that has seemingly no catches...

The Greek island of Antikythera is on the lookout for new residents in an effort to combat it's dwindling population.

It only has twenty-four permanent residents.

You'd certainly get to know your neighbors on this island! The tiny piece of land is located between Crete and Kythira in the Mediterranean, which are both highly popular vacation spots.

It's only twenty square miles big.

A forty-five-minute flight from Athens, Antikythera has a limited amount of resources, limited shopping stores, and only 1 airbnb apartment, according to their defacto tourism website.

And you will get paid for it!

The scheme was introduced by the local council.

Mayor of the island Andreas Charchalakis told Greek website iefimerida.gr: “Our place is very beautiful, but difficult during the winter months." “We are looking for many families to revive our island."

He has a specific type of clientele in mind...

It turns out that kids are extremely welcome on this island. He explained, "We need three young families, large enough to make Antikythira live and full of children’s voices."

He believes that children bring the island to life.

He elaborated on his desire for the island to be full of young and happy families: “A few days ago, three small children settled in Antikythira with their parents, who were from the island and the place was finally alive again."

So, what're you waiting for?!

Gather up the fam and get your flight booked. It isn't every day that you can earn your dollar through relaxing in a Mediterranean paradise, is it?