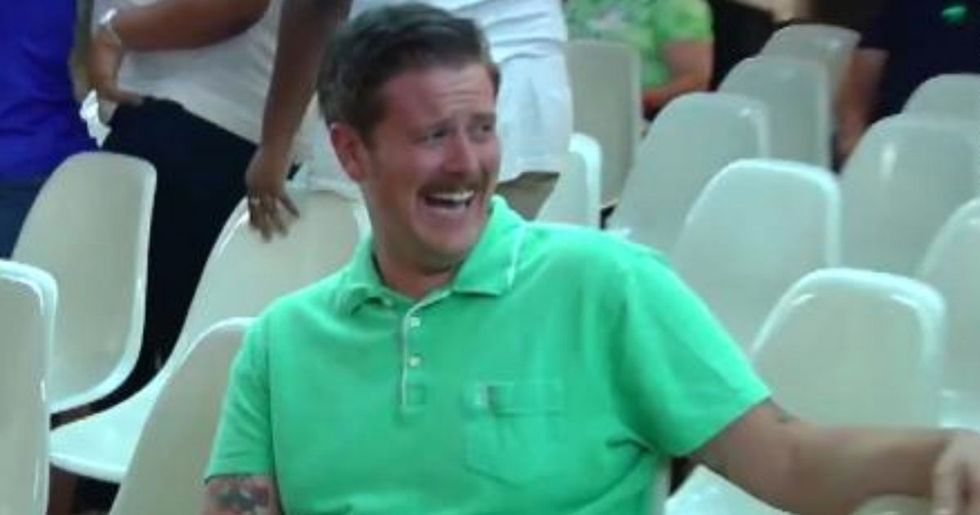 Sometimes, Donald Trump is just so infuriating that there's no reasoning with his (and his supporters') point of view. And for times like that, there's really only one appropriate response - as demonstrated on Twitter this week.

In a city council meeting in Tucson, Arizona, officials were debating whether to turn the city into a safe sanctuary for immigrants but were interrupted by two protestors. The Trump-supporting pair were furious at the idea of compassion for immigrants - but one man's response was, quite simply, incredible. And now the hero, known colloquially as "green shirt man," has managed to have another impact - this time, on shirt sales.

When we face differences of opinion, sometimes, debate and protest is the best way.

For people who are reasonable, measured, and willing to hear from other sides, talking through issues can be the best way to reach a compromise.

But, sometimes, that just isn't possible.

And when your opposition is supporting a man who is equal parts ignorant and prejudiced, trying to get them to change their point of view can seem impossible.

But what do you do when there's no getting through to someone?

Well, we were all at something of a loss - until this week. Because one man has shown us all the very best way to deal with ignorance and prejudice: through the magic of laughter.

This week, at a city council meeting in the city, two protestors interrupted proceedings, and one man's incredible response has gone viral.

The meeting was discussing a controversial issue.

The city was debating whether or not to make their city a sanctuary for immigrants, granting them a safe space.

But the peaceful debate was interrupted.

Two protestors (wearing, of course, "Make America Great Again" hats) came barrelling into the proceedings, shouting and yelling, and not listening to what anyone else had to say.

In fact, many in the meeting shouted insulting responses at the protestors - who seemed oddly nonplussed by how dumb they were making themselves look.

A video of the incident was shared online.

Two notes: 1) The city was legally required to put the measure on the ballot because the group proposing the initia… https://t.co/QqxYcpRIpb
— Nick VinZant (@Nick VinZant)1565147023.0

Journalist, Nick VinZant, posted a video of the event on Twitter and pointed out that, aside from being rude and ignorant, the pair were also trying to be as disruptive as possible.

But there was one response, in particular, that got the internet's attention.

Sat beside these two loud, furious protestors was a man wearing a green shirt - and all he could do in the face of their ridiculousness was laugh.

VinZant posted it on August 7th, and it's really taken off online, all thanks to that excellent green-shirted man.

Many on Twitter have taken a shine to this character.

Even celebrities have got in on the joke, with actor, Mark Ruffalo, using the hashtag "Green Shirt Guy" to offer his support.

Many have honored this man as a national hero.

Imagine if everyone acted more like green shirt guy. Instead of getting angry, laughing at the absurdity of the state of the world. We'd surely all be happier.

there is something about #greenshirtguy that completely nullifies any dumb shit that woman is saying. you forget ab… https://t.co/l1dMjAw5ud
— chrissy teigen (@chrissy teigen)1565226917.0

The fact that he's managed to turn such a depressing situation into something genuinely hilarious is worth applauding.

While green shirt guy's response is particularly perfect here, this sort of hysterical laughter is pretty much funny whatever the scenes.

Many have a new political leaning.

None of the current candidates speaking to you? Green shirt guy is everything we need in a leader.

For too long, the GOP and Trump supporters have led the way in terms of identifying clothing items. But green shirt guy has singlehandedly changed all that.

Trump opposers finally have a clothing item of their own.

I ate a burrito once with @Alex_Kack and now he's an icon. I hope the green shirt becomes the antithesis of the re… https://t.co/OxQQmCbfs2
— Bark Wahlberg (@Bark Wahlberg)1565247147.0

And in a red hat vs green shirt battle, we can't imagine the side that's in constant hysterical laughter would be beaten.

Oh, and to make matters even funnier?

@NickVinZant She is mistaken. The Constitution legalizes and protects immigration and subsequent naturalization. Article I, Section 8.
— Victor Stoddard (@Victor Stoddard)1565210949.0

Turns out, the protestor was actually totally wrong about what Tucson officials were debating being illegal. Great stuff.

People also dug up this dirt.

Some are hopeful that this will turn into a trend.

Putting on a green shirt and laughing at racists sounds like as good an internet challenge as any - as comedian, Kathy Griffin, proves.

Others have offered this idea.

Green shirt guy could be an early contender for the easiest (but most hilarious) Halloween costume of 2019. That's an idea to keep saved for later.

And it seems like people are taking the idea semi-seriously.

But if you were worried about how green shirt guy would stock up on his favorite item...

Never fear. The very manufacturers of the shirt have reached out to the man and offered him any shirt from their range. It pays to be hilarious online sometimes!

"Ultimately I think the majority of this country, regardless of their political affiliation, understands that the loudest voices happening right now are kind of ridiculous. And I think that that laughter is resonating because I think that's kind of how people feel right now," Kack told News 4 Tucson.

New interview with @Alex_Kack aka #GreenShirtGuy "The majority of this country.... understands that the loudest vo… https://t.co/NUSVLFve8l
— Nick VinZant (@Nick VinZant)1565225533.0

In a world of MAGA hats, let's all try to be a little more green shirt guy. And, for yet more Trump-related fails, scroll on for the El Paso victim's response to his hospital visit.