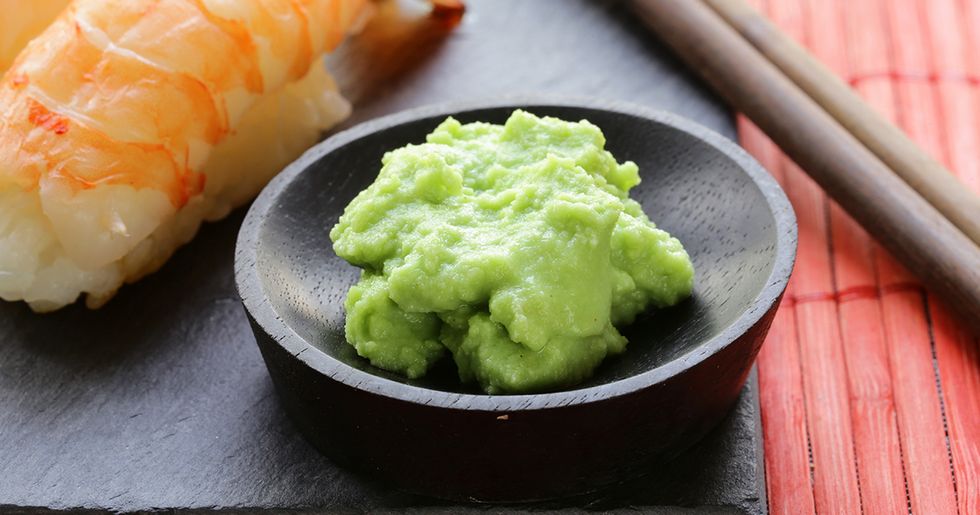 Le gasp! As it turns out, we've been eating fake wasabi for our whole lives. Because Business Insider did a deep dive into what wasabi really is, and it's pretty fascinating.

So now we know: real wasabi is rare and painfully expensive, and that green paste we've been eating is a pale imitation. Many people who have discovered this felt a number of things: surprised, betrayed, interested and hungry. See what you think of this revelation, too! It has pretty much been the best-kept secret that isn't a secret.

But now the secret is out, and people can't believe what they've been missing. Don't fret, we've got you covered. Here's what the REAL wasabi actually is!

Fans of sushi think they know what wasabi is.

It's that green stuff you get with every sushi dish! Right?

But that's only partially true.

Real wasabi is a green paste, made from the ground-up wasabi root which is native to Japan.

And yet, you may never have actually tasted it.

Wasabi is rare and very expensive, so most restaurants here don't have the funds or time to serve customers authentic wasabi.

Many establishments serve a wasabi substitute.

Often, it's a mixture of mustard, horseradish, and green food coloring – sometimes with the barest dash of wasabi powder, sometimes not.

Is that feeling of betrayal creeping up on you yet?

Both horseradish and mustard are related to wasabi, and their spiciness comes from similar chemicals. It's enough alike to fool most American customers.

There is a definite difference, though.

Substitute-wasabi is sharper in taste, but true wasabi is smooth and comes with a natural sweetness alongside the spicy.

So why don't we get real wasabi?!

Well, there is an answer to this. Wasabi is a small green plant in the brassica family, which also includes cabbage, mustard, horseradish, and broccoli.

But it's got a few other differences from the rest of the family.

A kilogram of fresh wasabi comes at a steep price; it can be 25 times more expensive than the same amount of fresh horseradish. A pound of wasabi can total $100.

What goes into that crazy price?

It mostly comes down to the work that goes into growing it. Wasabi is recognized as the most difficult plant to grow commercially anywhere in the world.

You can only find it naturally occurring next to mountain streams in Japan. Wasabi needs shade, a constant source of running water, and rocky soil. Plus, it's very temperature-sensitive; it only tolerates temperatures between 8 and 20 degrees Celsius. (That's roughly 46 - 68 degrees Fahrenheit.)

If anything upsets the balance, problems ensure.

Wasabi plants are picky, and if the humidity gets too intense or use of the wrong minerals, the plants will suffer.

Well, yes, but there's more. Wasabi plants are also especially at risk of disease and pests.

It's still mostly grown in Japan.

Although, it has also begun to be commercially grown in Europe, as well.

Even if all of the wasabi plant's standards of living are met, it still takes about 18 months to grow and harvest.

From there, the work gets even harder.

This isn't the normal type of farming, where large machines can be used to harvest multiple plants at the same time. Everything has to be done by hand when it comes to wasabi!

Here's a brief overview of the process.

Wasabi plants need to be harvested, and then the whole plant is broken apart. Farmers then clean up the rhizome (which is the stem of the plant) to get it ready for a sushi counter.

From there, you can grate the wasabi using a very fine grater. But instead of making flakes, the grater is so fine that it turns the wasabi plant into a paste.

Keep in mind, the pasting is done at restaurants.

So if you don't see your wasabi ground up right in front of you at a restaurant, there's a pretty good chance you're not eating authentic wasabi.

What's up with that?

When wasabi is grated, it actually releases a number of spicy vapors. Wasabi then loses that scent within minutes of grating so it's crucial to grate the wasabi immediately prior to serving it.

5 minutes after grating, the wasabi is at its peak flavor. But 30 minutes after, it's almost entirely gone. And this only happens with a grating; if you chop the wasabi, you're not going to get that spicy flavor.

With all the above constraints, it's clear why substitute-wasabi is still very much needed in restaurants and stores.

That didn't stop the reactions from rolling in, though.

Upon hearing that they had been eating faux-wasabi for their whole lives, people were definitely shook.

Don't try and stick me with that white chocolate! I want real chocolate!

We have been bamboozled.

How long have YOU been eating wasabi, not knowing that it wasn't really wasabi?

Still, some people had to be realistic about this.

Well that was very interesting, and if my budget is any indication I will probably NEVER sample real Wasabi. https://t.co/IIp4AT9cVU
— Travis Hartfiel (@Travis Hartfiel)1548340442.0

Or is this pessimistic? If you wanna try real wasabi, then start saving!

It's a worthy addition. For most people, wasabi roots aren't something that can go on the weekly grocery list.

Other people just took it out on the horseradish.

And some people apparently were already experts.

No, this was not common knowledge. But I guess if you read the list of ingredients on a wasabi packet, you'd figure it out pretty fast!

Cool, right? Who knew wasabi was so complicated? Know any sushi-lovers who absolutely have to hear about this? Share the story!