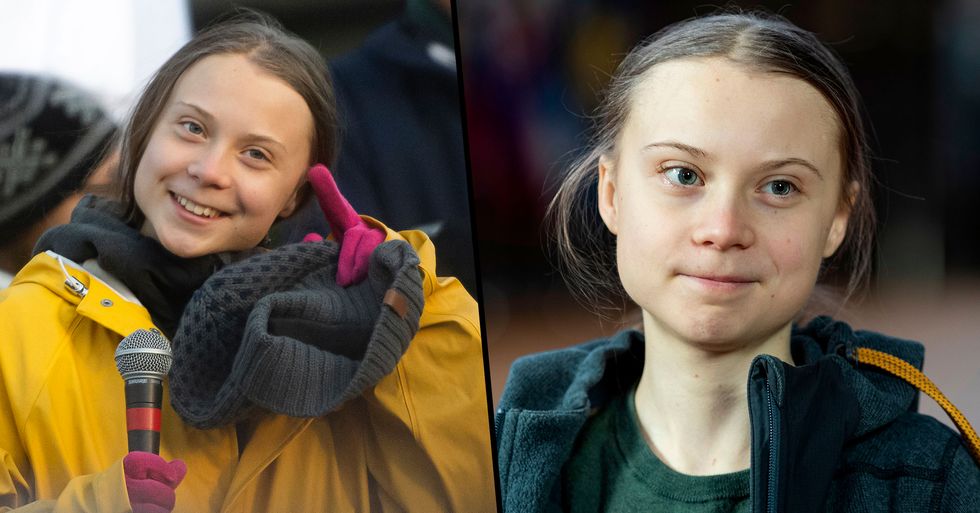 After being awarded one million dollars, Greta Thunberg has decided she will donate the prize money to different climate change groups including the SOS Amazonia Campaign based in Brazil.

Keep scrolling to see the video she posted explaining why she decided to make this bold move...

Greta Thunberg has done many amazing things in her short life...

But her most recent gesture may have just topped them all after she was awarded $1 million.

She's had a turbulent few years...

In the last couple of years, the seventeen-year-old activist has risen to unprecedented levels of fame regarding her fierce passion for climate change and the environment.

But, just over a year ago, she was relatively unknown.

The teen would sit outside the building during school hours for 3 weeks.

If we fast-forward to today, she continues to hold governments accountable during her powerful talks, which have seen her nominated for a Nobel Peace Prize and placed in TIME's top one-hundred influential people in the world list.

And she has gone to great lengths to fight her cause.

And her youth school strike movement hs continued to grow on a mass scale.

It's been a busy year few years for the teen.

But, in recent months, she's had to make her activism digital.

The ongoing medical pandemic has brought a temporary halt to the teenager's protests, rallies, speeches, and appearances.

But that doesn't mean she hasn't been continuing with her work.

Greta has remained active on all social media platforms, and she has reminded her followers that "we can’t solve a crisis without treating it as a crisis and we must unite behind experts and science."

But, despite remaining in quarantine herself...

The activist reportedly suffered from symptoms of the virus.

Last month, she took to Instagram to inform her fans of her condition...

Around 10 days into her quarantine, she started to experience the symptoms.

"I started feeling some symptoms, exactly the same time as my father - who traveled with me from Brussels. I was feeling tired, had shivers, a sore throat, and coughed. My dad experienced the same symptoms, but much more intense and with a fever."

Luckily, Greta made a full recovery.

But she had a strong message for her followers. "AND THIS IS THE BOTTOM LINE: I almost didn’t feel ill. My last cold was much worse than this! Had it not been for someone else having the virus simultaneously I might not even have suspected anything. Then I would just have thought I was feeling unusually tired with a bit of a cough. And this is what makes it so much more dangerous."

And she reminded people to continue self-isolating...

Even if they don't have symptoms.

Evidently, preventing any further spread of the virus is a huge deal for the activist...

And she has been continuing her school strikes from her home.

This girl isn't going to let a little medical pandemic get in the way of her message...

And, she has now decided to do something incredible for the fight.

She was recently awarded another prominent award...

Jorge Sampaio announced that the seventeen-year-old would be receiving the Gulbenkian prize for humanity, a Portuguese award, for "[being] able to mobilize younger generations for the cause of climate change and her tenacious struggle to alter a status quo that persists."

But rather than keeping the money, the teen has decided to donate it to other activist groups.

"I’m extremely honoured to receive the Gulbenkian Prize for Humanity. We’re in a climate emergency, and my foundation will as quickly as possible donate all the prize money of 1 million Euros to support...1/3"

She continued in the comments:

"... organisations and projects that are fighting for a sustainable world, defending nature and supporting people already facing the worst impacts of the climate- and ecological crisis - particularly those living in the Global South."

And she also added this at the end:

"Starting with giving €100.000 to the SOS Amazonia Campaign led by Fridays For Future Brazil to tackle Covid-19 in the Amazon, and €100.000 to the Stop Ecocide Foundation to support their work to make ecocide an international crime."

The news comes after the climate activist also donated $100,000 to UNICEF Pandemic efforts.

What a remarkable girl.

I’m extremely honoured to receive the Gulbenkian Prize for Humanity. We’re in a climate emergency, and my foundatio… https://t.co/ogSWTrQx8M
— Greta Thunberg (@Greta Thunberg)1595241192.0

Now, if you're in the mood to see how other people are doing their own bit to help the planet, then keep scrolling to read about how these brothers have found a sustainable way to produce leather...