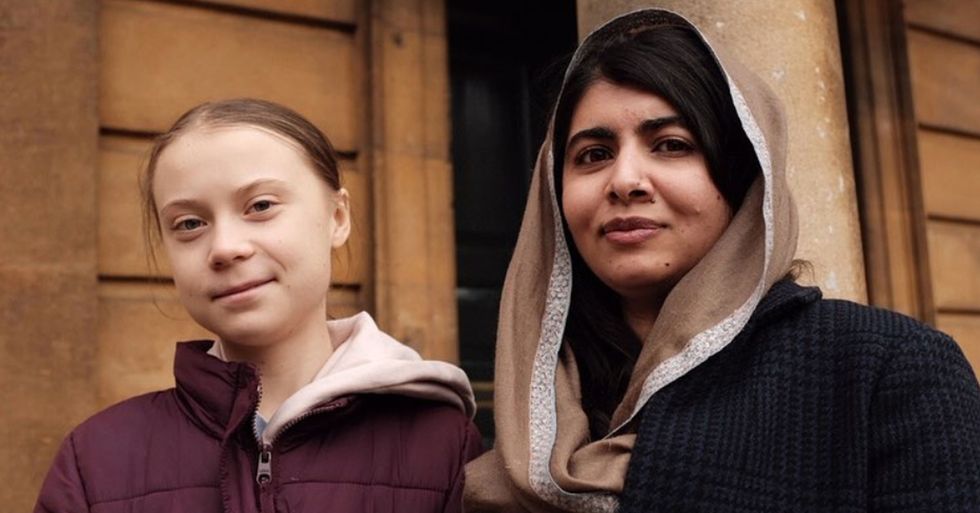 Greta Thunberg is undoubtedly one of the most talked-about seventeen-year-olds in the world right now. The teen has truly made a mark on the world with her unwavering commitment to the climate change movement - a cause which is showing no signs of slowing down.

This week, Greta touched down on British soil to meet with fellow activist Malala Yousafzai, and it was everything we'd hoped for.

But it was Malala's caption on the snap she shared of herself and Greta that really caught everyone's attention...

Greta would regularly sit on her own outside Swedish parliament, first staging a "School Strike for Climate" in August last year. In the weeks leading up to the country’s general election, she sat on the steps outside of the parliament building in Stockholm, holding up the now-iconic sign that read “Skolstrejk För Klimatet" — translating to “school strike for climate."

Greta is known for delivering blistering, matter-of-fact speeches about the urgency of what she calls the "climate crisis."

If we fast-forward to now, Greta continues to hold governments accountable during her powerful talks, which have seen her nominated for a Nobel Peace Prize and placed in TIME's top one-hundred influential people in the world list.

Greta has gone to great lengths to fight her cause.

Little by little, her message seems to be sinking in.

On September 20, 2019, millions around the world, from London to New York, Sydney to Colombia, ditched the classroom to peacefully protest for climate action in what Greta dubs "Fridays for Future."

But, her movement has been met with waves of criticism.

Her activism has seen her labeled "melodramatic" amongst other things, as well as others saying that she is being used as a political shield. But that doesn't stop her...

Greta has even been awarded the title of TIME's Person of the Year for 2019.

Impressive in itself - but Greta also marks the youngest person ever to receive this title.

She beat out some fierce competition.

Greta was honored over other nominees including Speaker of the House Nancy Pelosi, the CIA whistleblower who triggered Trump's impeachment proceedings, and Hong Kong's pro-democracy protesters.

"She became the biggest voice on the biggest issue facing the planet this year, coming from essentially nowhere to lead a worldwide movement."

"She embodies youth activism. Her rise in influence has been really extraordinary. She was a solo protester with a hand-painted sign 14 months ago. She's now led millions of people around the world, 150 countries, to act on behalf of the planet, and she's really been a key driver this year taking this issue from backstage to center," said TIME's Editor-in-Chief Edward Felsenthal.

But, this week, Greta finally got to meet the person who inspired her most.

Malala is a well-known education advocate.

As a young girl, the now twenty-two-year-old defied the Taliban in Pakistan and became an education advocate - campaigning for girls to be allowed to receive an education.

And as a result of her views...

And in 2014, aged seventeen, she became the youngest recipient of the coveted Nobel Peace Prize, becoming a symbol of resilience for oppressed women across the world.

And on Tuesday, Greta, who is currently in the U.K. to join a school strike in Bristol on Friday, took the opportunity to meet with Malala - who she says is her role model.

And it was everything we'd hoped for.

everyone appreciate this photo of the literal malala yousafzai and greta thunberg walking past me (front right) as… https://t.co/p7tklf4MeU
— laura (@laura)1582640331.0

The pair met to discuss their activism. Keep scrolling to take a look at the snaps.

Greta also addressed some of the students about the strike and the climate crisis.

Honoured to host @gretathunberg at @lmhoxford today. grateful she found time to talk to some of our students about… https://t.co/il8IbCI7oH
— alan rusbridger (@alan rusbridger)1582648264.0

The college’s master, Alan Rusbridger, posted a photo of Greta on his Instagram and Twitter, saying that he was "honoured to host" her and grateful that she carved out some time to talk to the students.

But it was only a matter of time until Malala and Greta met in the flesh...

Malala has been a long-time supporter of Greta's school strikes. In fact, last year, when Greta joined climate strikes in New York City, Malala tweeted: “I’m so happy to see that young women around the world are leading the climate movement. Thank you to girls like @GretaThunberg for using your voice, speaking truth to power — and encouraging other young people to do the same."

On Tuesday, the day finally came.

"So... today I met my role model. What else can I say? @malala," Greta captioned the post.

But her caption was a real stand out.

Malala Tweeted out a snap of the pair...

"She’s the only friend I’d skip school for," she joked in the caption.  It's amazing to see 2 of the world's most influential activists together. For more on Greta, keep scrolling to read a story all about the teenage "Anti-Greta" climate change denier who has been making waves online...