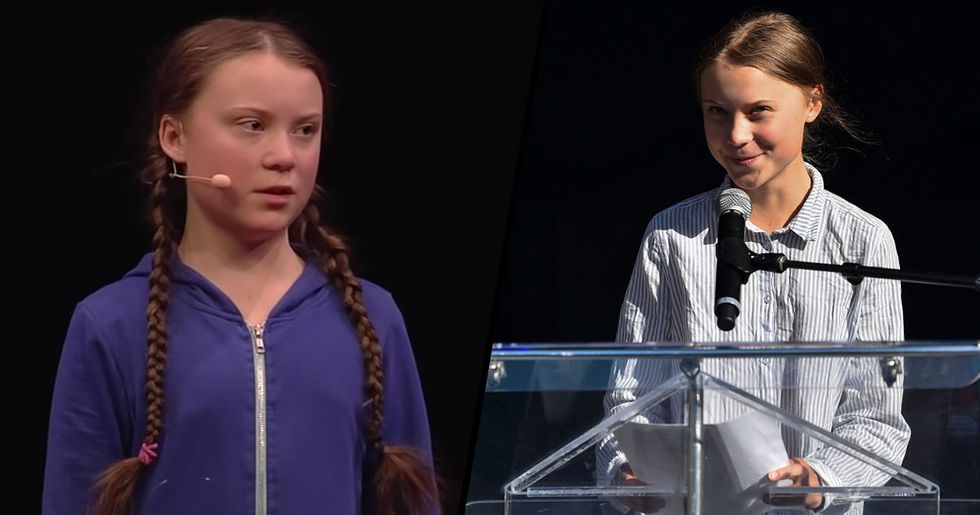 It's been a pretty busy year for climate change activist, Greta Thunberg. The sixteen-year-old addressed world leaders at the U.N. Climate Summit, delivering a stinging speech about the urgency of the climate crisis. Then, after crossing paths with no other than President Trump in the lobby, fired the ultimate death stare, which subsequently went viral online.

The teen then bagged the 2019 Right Livelihood Award, which is widely known as the "Alternative Nobel Prize," for her pioneering work in the youth climate change movement, scooping up a pretty impressive cash prize. But now, after winning another environmental award, Greta has spoken out against the prize. Read on to find out why.

"You are failing us. But young people are starting to understand your betrayal. The eyes of all future generations are upon you. And if you choose to fail us, I say: We will never forgive you. "We will not let you get away with this. Right here, right now is where we draw the line. The world is waking up. And change is coming, whether you like it or not."

When faced with one of the world's most powerful leaders, Thunberg remains fearless, and her death stare has become something of an internet sensation.

In usual Trump-style, he took to Twitter to seemingly mock the teen, writing, "She seems like a very happy young girl looking forward to a bright and wonderful future. So nice to see!" above a video of her speech.

Thunberg was even listed as 1 of 4 winners of the 2019 Right Livelihood Award, which is widely known as the "Alternative Nobel Prize."

Thunberg was honored with the prize for her "inspiring" work.

According to a statement from the Right Livelihood Foundation, "Thunberg is the powerful voice of a young generation that will have to bear the consequences of today's political failure to stop climate change."
"Her resolve to not put up with the looming climate disaster has inspired millions of peers to also raise their voices and demand immediate climate action."

Thunberg joins 3 other winners who bagged the award too.

Thunberg, along with the other winners, has scooped up a pretty impressive cash prize.

According to Reuters, the 4 winners will each receive a cash award of one million Swedish krona ($103,000).

Here's how Thunberg reacted to her win...

The climate change activist said she "shared the award with the many people and adults who have joined her in her environmental crusade." "I'm deeply grateful for being one of the recipients of this great honor."

Although she was quick to say that she isn't the sole winner.

"But of course, whenever I receive an award, it is not me who is the winner. I am part of a global movement of school children, youth and adults of all ages who have decided to act in defense of our living planet. I share this award with them," she added." "The Right Livelihood Award is a huge recognition for Fridays For Future and the climate strike movement. Thank you so very much!" It was an impressive win.

And this week, it was announced Thunberg's award season wasn't over.

She was awarded a coveted Environmental Prize from the Nordic Council, which comes with a whopping $400,o00 cash prize.

But Thunberg had a rather unexpected reaction.

While expressing gratitude for being chosen, she's also decided to turn down the award - and she took to social media to explain why.

"I have received the Nordic Council’s environmental award 2019. I have decided to decline this prize."

"The climate movement does not need any more awards. What we need is for our politicians and the people in power start to listen to the current, best available science."

"The Nordic countries have a great reputation around the world when it comes to climate and environmental issues."

"There is no lack of bragging about this. There is no lack of beautiful words. But when it comes to our actual emissions and our ecological footprints per capita - if we include our consumption, our imports as well as aviation and shipping - then it’s a whole other story."

"In Sweden, we live as if we had about 4 planets according to WWF and Global Footprint Network."

"And roughly the same goes for the entire Nordic region. In Norway for instance, the government recently gave a record number of permits to look for new oil and gas. The newly opened oil and natural gas-field, "Johan Sverdrup" is expected to produce oil and natural gas for 50 years; oil and gas that would generate global CO2 emissions of 1,3 tonnes."

"The gap between what the science says is needed to limit the increase of global temperature rise to below 1,5 or even 2 degrees - and politics that run the Nordic countries is gigantic."

"And there are still no signs whatsoever of the changes required."

"The Paris Agreement, which all of the Nordic countries have signed, is based on the aspect of equity, which means that richer countries must lead the way."

"We belong to the countries that have the possibility to do the most. And yet our countries still basically do nothing. So until you start to act in accordance with what the science says is needed to limit the global temperature rise below 1.5 degrees or even 2 degrees celsius, I - and Fridays For Future in Sweden - choose not to accept the Nordic Councils environmental award nor the prize money of 500, 000 Swedish krona."

It's a bold move - but she has declined with grace. She wrote, " I want to thank the Nordic Council for this award. It is a huge honor."

And although Thunberg has won many awards, she missed out on the Nobel Peace Prize this year. Scroll on for all the details.