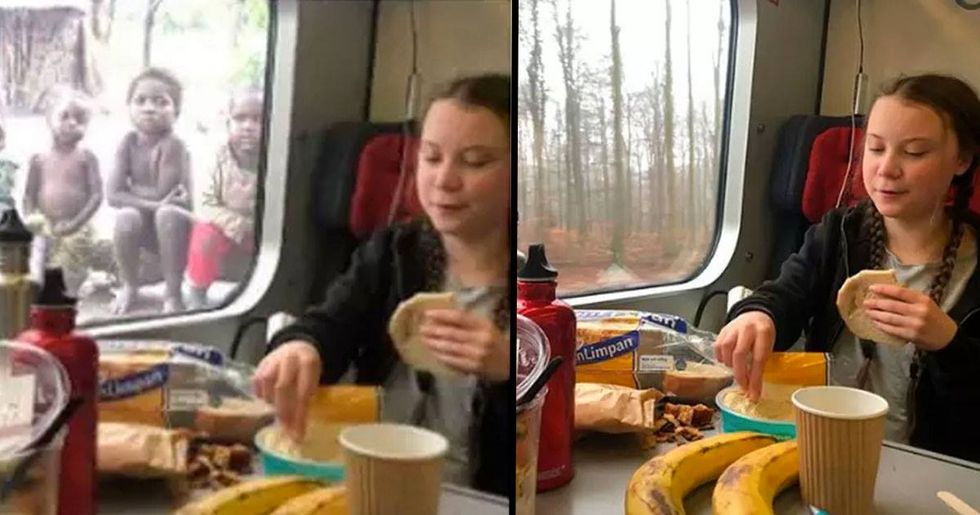 "How dare you!" are the poignant words of pioneering climate change activist, Greta Thunberg, who addressed world leaders at the U.N. Climate Summit on Monday. Her powerful, stinging speech brought home the reality of the sheer ignorance of our world leaders when it comes to climate change, and their inability to do anything about it, or even see it as an issue in the first place.

However as is often the case with the Internet, things move quickly. And no longer are the eyes of the world on the UN speech, but they are on this.

A seemingly innocent photo of Greta went viral recently after trolls began slamming her for reportedly using single use plastics. To make matters worse, the same photo was then doctored and edited to show Greta eating in front of hungry looking children.

And thousands of people believed the image was legitimate... Including some big names in politics. Oh dear.

Greta's speech wasn't the only thing to go viral this week.

A photo of the sixteen-year-old sat on the train was posted to Twitter by @pocket_rocket96.

This picture wasn't just any old picture though...

It showed Thunberg surrounded by lots of food and packaging while she eats.

Now, this may look like the ideal picture to shout "hypocrite!" at...

And that's exactly what this user did. She captioned the post: "Oh she looks so frightened about the immediate climate catastrophe. As she sits there on a train, surrounded by plastic containers and processed foods. A picture paints a thousand words. This tells you she knows nothing about what she speaks of."

But she made a very rookie mistake...

What @pocket_rocket96 failed to realize is that she wasn't enlightening anyone, just spreading false information. I mean, anyone can post on Twitter, even the misinformed.

Here's why she should have done the research.

Do you really think Greta Thunberg wouldn't practice what she preaches? And secondly, do you think someone who is close with her would post a potentially incriminating photograph of her? Some of these people really aren't the smartest tools in the box, are they?

Here are some facts for you:

Thankfully, @georgiaanais_ is here to set the haters straight.

nobody in this world is perfect and of course she will have to use one use plastic where there is no alternative, w… https://t.co/t4PqEo3kfu
— georgia-anäis (@georgia-anäis)1569428863.0

I don't understand why some of you need reminding about this? I'm genuinely alarmed and disgusted at some "adults" in the world. I have to use that term very loosely because they're filled with habits that even children have grown out of.

Exhibit A: we have Andy over here.

Andy also forgot to do his research, a common feature among haters, so he posted this comment: "You can tell all that from one picture?" Oh Andy, you absolute idiot.

Thankfully, Georgia was back to enlighten him...

Someone else decided to hop in and set Andy and the rest of the haters straight.

So everything on the table in the photo is made from recyclable packaging? Wow. Gee. Who would have thought?! Finally, a leader that practices what she preaches.

However, things went from bad to worse.

As if being slandered by trolls for her apparent "use of plastics" wasn't bad enough, other trolls went to the extreme of doctoring the image of her on a train.

The edited photo showed Greta eating her lunch as several starving children looked inwards at the food. Although the image is quite clearly not authentic, many were convinced by the photo - including some high profile celebrities.

The President of Brazil's son shared the image.

One man who fell for the image was none other than the President of Brazil's son, Eduardo Bolsonaro. Bolsonaro, son of the controversial president, Jay Bolsonaro, shared the image with the caption: "'You stole my childhood' said the girl financed by George Soros' Open Society."

Eduardo also suggested that she receives funding from billionaires.

The post included an article that Eduardo shared which suggested that Thunberg receives funding from Hungarian-American billionaire, George Soros. However numerous reports state that there is no evidence at all to prove that Thunberg receives funding from Soros' foundation. In a position of power, sharing evidently fake information like this about "a CHILD" is unbelievably dangerous.

The president's son has now been accused of irresponsible fake news.

And it isn't only me who believes posts such as these to be despicable. Brazilian Senator, Eliziane Gama, slammed the post as a "great irresponsibility." She added: "Fake news today is an evil which must be combated in every democratic society in the world. It's something that we do not accept, and it is accepted even less when it is done by a public representative. Even less when it is a public representative who is being proposed to work in one of the most important embassies in the world. "It's irresponsibility, in my understanding, without precedent. It's lamentable, and I think the deputy needs to retract it, make an apology to the 16-year-old and to both the Brazilian and international society." I second that... but Bolsonaro doesn't seem to care.

Watch her full speech below