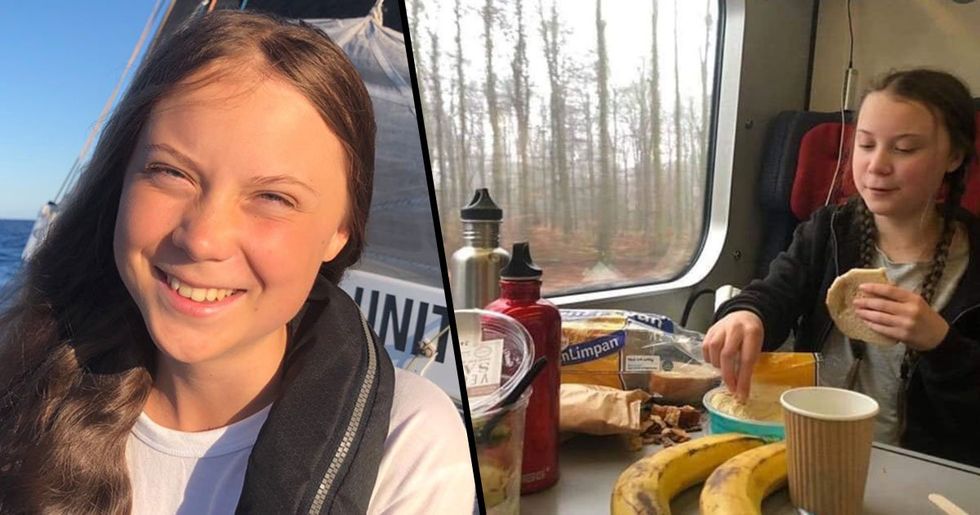 "How dare you!" are the poignant words of pioneering climate change activist, Greta Thunberg, who addressed world leaders at the U.N. Climate Summit on Monday. Her powerful, stinging speech brought home the reality of the sheer ignorance of our world leaders when it comes to climate change, and their inability to do anything about it, or even see it as an issue in the first place.

But that's not the only thing to have gone viral this week. A photograph of Thunberg sat on a train has taken the internet by storm for all the wrong reasons. However, there is a shocking twist to the story...

Greta's speech wasn't the only thing to go viral this week.

A photo of the sixteen-year-old sat on the train was posted to Twitter by @pocket_rocket96.

This picture wasn't just any old picture though...

It showed Thunberg surrounded by lots of food and packaging while she eats.

Now, this may look like the ideal picture to shout "hypocrite!" at...

And that's exactly what this user did. She captioned the post: "Oh she looks so frightened about the immediate climate catastrophe. As she sits there on a train, surrounded by plastic containers and processed foods. A picture paints a thousand words. This tells you she knows nothing about what she speaks of."

But she made a very rookie mistake...

What @pocket_rocket96 failed to realize is that she wasn't enlightening anyone, just spreading false information. I mean, anyone can post on Twitter, even the misinformed.

Here's why she should have done the research.

Do you really think Greta Thunberg wouldn't practice what she preaches? And secondly, do you think someone who is close with her would post a potentially incriminating photograph of her? Some of these people really aren't the smartest tools in the box, are they?

Here are some facts for you:

Thankfully, @georgiaanais_ is here to set the haters straight.

nobody in this world is perfect and of course she will have to use one use plastic where there is no alternative, w… https://t.co/t4PqEo3kfu
— georgia-anäis (@georgia-anäis)1569428863.0

I don't understand why some of you need reminding about this? I'm genuinely alarmed and disgusted at some "adults" in the world. I have to use that term very loosely because they're filled with habits that even children have grown out of.

Exhibit A: we have Andy over here.

Andy also forgot to do his research, a common feature among haters, so he posted this comment: "You can tell all that from one picture?" Oh Andy, you absolute idiot.

Thankfully, Georgia was back to enlighten him...

Someone else decided to hop in and set Andy and the rest of the haters straight.

So everything on the table in the photo is made from recyclable packaging? Wow. Gee. Who would have thought?! Finally, a leader that practices what she preaches. Many users in the thread were angered by the fact that grown-ass adults were going out of their way to make Greta Thunberg look bad just because they can't get their heads around the fact that they are part of the problem. And in one speech, Thunberg managed to call them all out. Don't worry, we've got your back, Greta!