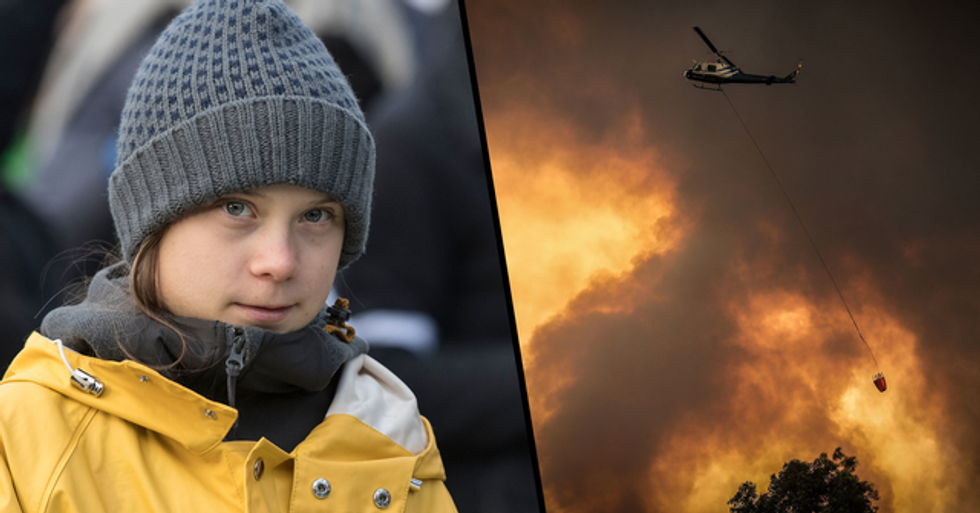 Over the past couple of months, Australia has been completely ravaged by devastating, out-of-control bushfires.

8 people have died, hundreds of homes have been destroyed, thousands of helpless animals have been killed, and millions of hectares of natural land have been completely burnt out.

This is clearly a climate change crisis, and now, the face of the climate-change movement, Swedish teen Greta Thunberg, has finally addressed the situation and has offered her insight into the devastating crisis the country is currently facing.

And, in the last couple of months, Australia has been concrete evidence of this theory.

Starting in November this year, the country has been relentlessly ravaged by ferocious bushfires.

Areas of South Australia and the eastern state, New South Wales, have been hit the hardest.

8 people, including 2 volunteer firefighters, have tragically died in the blazes, and over 700 homes have been destroyed.

And not to mention the impact the fires have had on the wildlife.

Over 1000 koalas are estimated to have perished in the flames, and over eighty percent of their habitat has been destroyed, leaving many people to claim that the species are now "functionally extinct."

They are truly apocalyptic scenes.

Even in the unaffected coastal areas, a layer of toxic smoke has descended, suffocating cities and their residents. And, sadly, the fires show no sign of slowing down anytime soon.

They are the worst conditions that the country has seen in years.

And people are starting to ask questions - Why is this happening?

This isn't just a coincidence.

The devastating fires have been fueled by record-breaking high temperatures and months on end of severe drought.

If this isn't evidence, then what is?

And, if there's one person who fights against climate change...

It's Greta Thunberg. Though she has initially remained silent on the serious situation down under, she has now offered her insight into the horrific conditions.

She has, once again, slammed the politicians in charge.

Not even catastrophes like these seem to bring any political action. How is this possible? Because we still fail to… https://t.co/y32BultloJ
— Greta Thunberg (@Greta Thunberg)1577007441.0

"Not even catastrophes like these seem to bring any political action. How is this possible?" She wrote alongside an Australian news report of the devastating fires to her 3.7 million Twitter followers.

She has blamed climate change for the deadly weather conditions.

"Because we still fail to make the connection between the climate crisis and increased extreme weather events and nature disasters like the #AustraliaFires That's what has to change. Now."

Her comments come just days after the Australian Prime Minister came under fire for taking a family vacation amid the bushfire crisis...

So many assume that her scathing tweet has been directly aimed at his abysmal response to the deadly fires.

Many Australians have applauded Greta for her comments...

@GretaThunberg Greta our Australian Prime Minister is a disgrace and he has underfunded the fire departments, denie… https://t.co/1CJ1yKBg0P
— Gail 💦 (@Gail 💦)1577012647.0

And a high percentage seemed to agree with her on her stance on politicians' roles in the climate change battle. "To battle the climate crises we must get corruption out of our governments. The governments must work for the best interests of the earth and its inhabitants," one Twitter user wrote, while another simply put, "Thanks Greta - lets all keep up the pressure and awareness."

Yet, despite the good intentions behind her messages...

Tweeting isn't going to solve the climate change crisis that our planet is currently under attack from. Action needs to happen now before it's too late. Many different solutions to climate change have been put forward, but perhaps the most bizarre one was that we should all become cannibals... Keep scrolling for the full story.