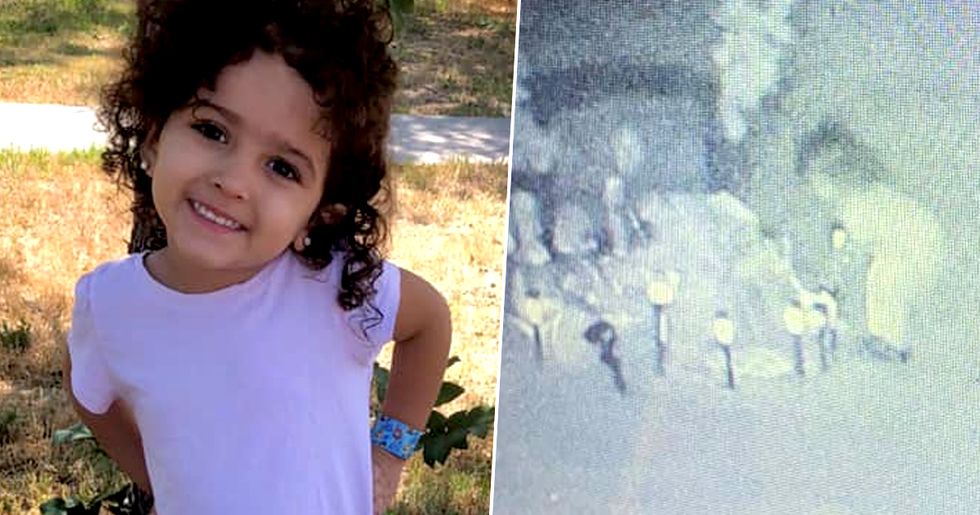 This is the story of how a grieving mother believes she saw her late daughter's spirit playing with toys at her own grave.

The entire incident was captured on CCTV and shows a small figure very clearly wandering around the cemetery.

The figure, who undeniably resembles the young girl who tragically passed away not too long ago, approached another child's grave and then strangely there are two figures who walk off together with a tall figure before disappearing into the night.

Grieving is a difficult process.

No matter who you've lost, if they're close to you grieving can be exceptionally difficult.

And it's different for everyone.

No single grieving process is the same. The way everyone deals with a loss and their emotions is significantly different.

You can take comfort from strange things.

Some people like to forget, others like to tell stories about their loved one, others refuse to let their spirit die.

This young mum took comfort from something very unique.

And no matter what you say, it's absolutely haunting.

The mom's name is Saundra Gonzales.

And her daughter is called Faviola Rodriguez - but tragically Little Faviola died two years ago while in the care of her mother's boyfriend.

Faviola was buried at the Mosanic Cemetery in Las Cruces, New Mexico.

But sadly, things kept getting robbed from graves in the cemetery while other headstones where being vandalized. So one family decided to set up cameras to catch the culprits.

But they caught something else instead.

Many of these stories about images of ghosts and spirits are pretty vague and blurry - but this is pretty damn clear.

When one family was looking through the CCTV footage.

They saw a small child wandering around the graveyard at night and were so spooked they alerted cemetery staff.

Staff claimed to know who the little girl was.

And when they went to visit her grave, the little girl's mom was at the grave too - and was shown the images.

She broke down immediately.

And claims she knew it was her daughter the second she saw the images. The resemblance is uncanny.

I immediately burst into tears as she showed us the photo and I was just lost at words because I KNOW that is my daughter! There is not one ounce of doubt in my heart because it looks like her head to toe, from her hair to her clothes and chanclas!

They family started to tell us a little about their brother that had passed and I did my own research into him and now I know what brought her to him.

“He always believed in Redemption and his dream was to minister to those feeling lost and saving lives. James will be greatly missed and remembered for his contagious smile, sense of humor and his jack of all trades."

I know Faviola was sent to James from the lord to take him to heaven because he is an angel just as she is.

"I truly believe in my heart she was sent to him to comfort him and to let him know he is okay now."

In the last photo you can see two figures a tall man and a child walking away! She took him home with our mighty Lord.

She explained that she believed her daughter was there to take James to heaven - adding that they are both similar in a few ways.

They both have such a tragic story of things that happened to them and ... both of them still haven't gotten justice. So, I think she was definitely there to comfort him and take him to heaven.

While in the care of her mother's boyfriend, she was found with bruising on her head, face, and ribs.

Her mother's boyfriend was arrested.

But after just a year he was released on bond.

Rest in peace Faviola and James.

Our thoughts go out to both of these families during these hard times.