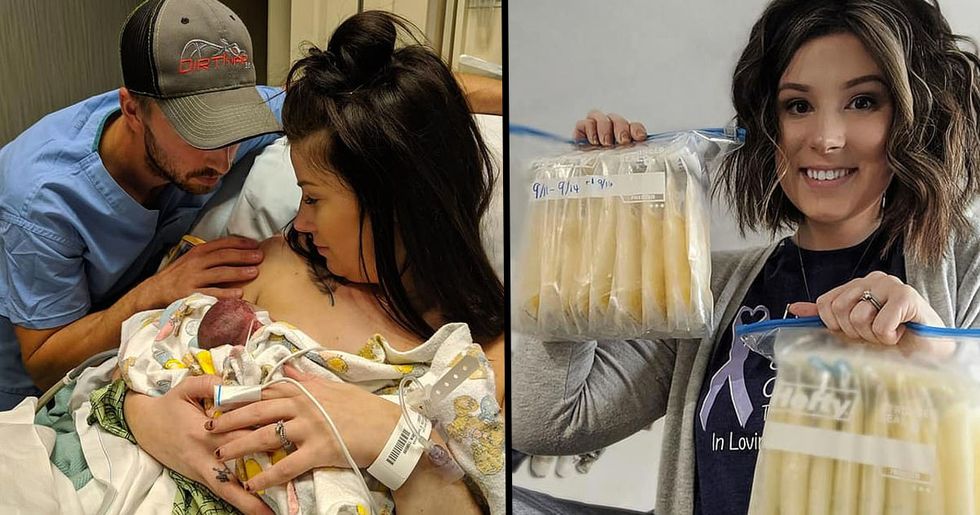 No-one said parenting was easy, and if anyone did say that they're clearly not talking from experience.

Being a parent is hard and you can never anticipate the challenges that you'll face.

Sierra Strangfeld is a parent that has dedicated herself to raising awareness on the struggle that 1 in 4 parents experience...pregnancy and infant loss.

The pain of losing a child is unimaginable.

Here's the story of how Sierra is bravely raising awareness, while dealing with her own loss...

Sierra and Lee Stranfeld dreamed of having a family.

Sadly the hair and makeup artist hasn't had the easiest of rides to becoming a parent.

Sierra and Lee had their first child 18 months ago.

Blessed with a daughter, the young couple called their firstborn, Porter Mae Jacquelin.

Porter was born with a tongue-tie.

This is a fairly common condition, wherein the baby's tongue has difficulty moving. This meant Sierra was unable to breast-feed her baby girl.

This is where Sierra first learned that she could donate her milk.

Whilst baby Porter was unable to feed, Sierra was still producing milk. Rather than let it go to waste, Sierra made the decision to donate her milk to those in need.

Many mothers have no idea this is a thing.

Breast milk donating doesn't get much air time and it is still quite an unknown fact that you can donate your breast milk.

But this wouldn't be the only time Sierra found herself donating breast milk...

Sierra gave birth to her second child this year.

Samuel only survived a few hours.

Writing about meeting her son on Facebook, Sierra posted saying "we held and loved our little boy with every ounce of our being."

After the loss of Samuel, Sierra decided to donate her milk again.

She decided that something good must come out of the tragic loss of Samuel.

Sierra wanted to give her son a legacy.

Sierra refused to let her son's death go in vain and set out to raise awareness about his condition.

The whole family has been raising awareness.

It has been important for both Sierra and Lee to process the death of their baby by spreading awareness about the rare generic disorder.

Even baby Porter has been helping out.

It's been important for all the family to raise awareness while ensuring that baby Samuel is remembered.

By donating her milk Sierra has helped keep other newborns alive and healthy.

Not that everyone has been supportive of Sierra.

Posting on her Facebook profile, Sierra shared some of the hateful messages she has received since her story went viral.

Some of the comments were truly horrible.

You can't even imagine why someone would want to be so cruel. It's obvious that Sierra is only trying to put good out in the world...It's understandable that such nasty comments would get her down.

Sierra carried on donating her milk.

For sixty-three days, Sierra breastfed and donated all of it to children in need.

As a family, they have helped each other process the death of baby Samuel.

The loss of baby Samuel has left Lee and Sierra closer than ever. The couple is looking forward to the future and endeavor to ensure baby Samuel will be remembered by his big sister, Porter.

People have commended Sierra for her actions.

She has shown real bravery and kindness of heart through her actions during this clearly difficult time.

Did you know that after mother’s own milk, donor breast milk is best for low birth weight babies?If you’re a breast… https://t.co/rgTlnWoT2v
— Cynthia Loyst (@Cynthia Loyst)1530654662.0

It's important that you know that your milk could save lives. If you have any excess breast milk then you could consider donating it to an infant in need.

Sierra is an inspiration to moms everywhere.

Continue scrolling to read a dad's touching tribute to his wife... It really is a moving read.