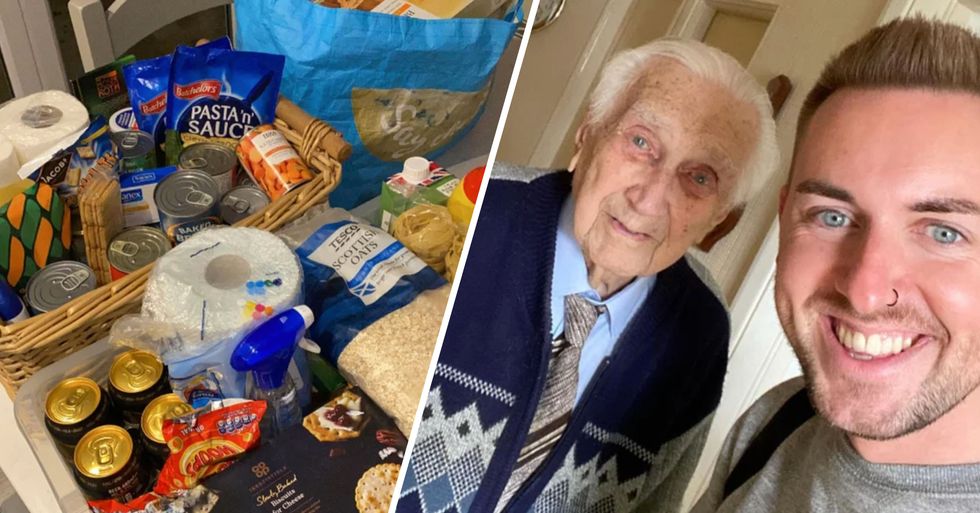 Way too many people around the world have been left without groceries due to the extreme stockpiling that people have been doing during the COVID-19 pandemic.

But thanks to some amazing kindness out there, one elderly man now has the supplies that he desperately needs.

Keep scrolling to find out more about this heartwarming story...

With the deadly COVID-19 sweeping the planet, millions have descended into mass hysteria - And have been frantically stocking up on basics such as toilet paper and dried pasta as a result. There's a sentence I never thought I'd write...

And none of us are entirely sure why.

Things are just as bad in the United Kingdom...

It is utterly devastating to know that these selfish acts have left the elderly unable to do their weekly shop...

But thanks to the kindness of one man, things are about to change.

This is Dan Scott.

He is from Essex in the U.K. and he works at a supermarket - meaning he is well and truly in the middle of all of this chaos.

The shelves of the supermarket where Dan works have, predictably, been stripped bare.

The young man has noticed the number of elderly people who have been struggling to stock up on their essentials and it has truly broken his heart.

So he decided to take action.

Last week, Dan met a 99-year-old regular shopper called Norman. The elderly man was struggling to get his hands on what he needed, and when he explained to Dan that he had eaten better during WW2, the supermarket worker knew things needed to change.

Dan took Norman's phone number and asked him to write a list of what he needed...

And he promised to deliver his shopping to him personally the next day.

Dan delivered a hamper of groceries to Norman's doorstep. Sharing his kind act on Facebook, he wrote, "Yesterday I met a man called Norman, he asked for some help with his shopping list. Sadly in these times, I couldn’t get Norman anything off his list but a comb. I was devastated. So I wrote down my number and asked him to call me with his list tomorrow, I will get it for him early and take it to him. Norman being very humbling said he’d try again tomorrow and when I asked how he was getting home, he laughed and said he was driving. HES 99 YEARS OLD!!! I was truly overcome with emotion when he left me and thought how can this man not get any food."

Dan went on to brand the people who are stockpiling as "selfish" and "disgusting"...

"Please can people share this, so we get a message out there that people buying all these products and clearing the shelves is seriously stopping people like Norman from even eating. All he wanted was bread, eggs, marmite, and some beans. It’s disgusting!!!" he continued to say. "He also told me today he had more food in the war...... think about that for a second. I feel so happy today knowing Norman has food tonight, but how many more Normans are there right now because of the most selfish, disgusting people in this world!! Stay safe everyone, and look around you, people really need your help."

And many have praised Dan for his generous act of kindness.

And more people need to put a stop to this ridiculous stockpiling and to start realizing that this is affecting other people's lives.