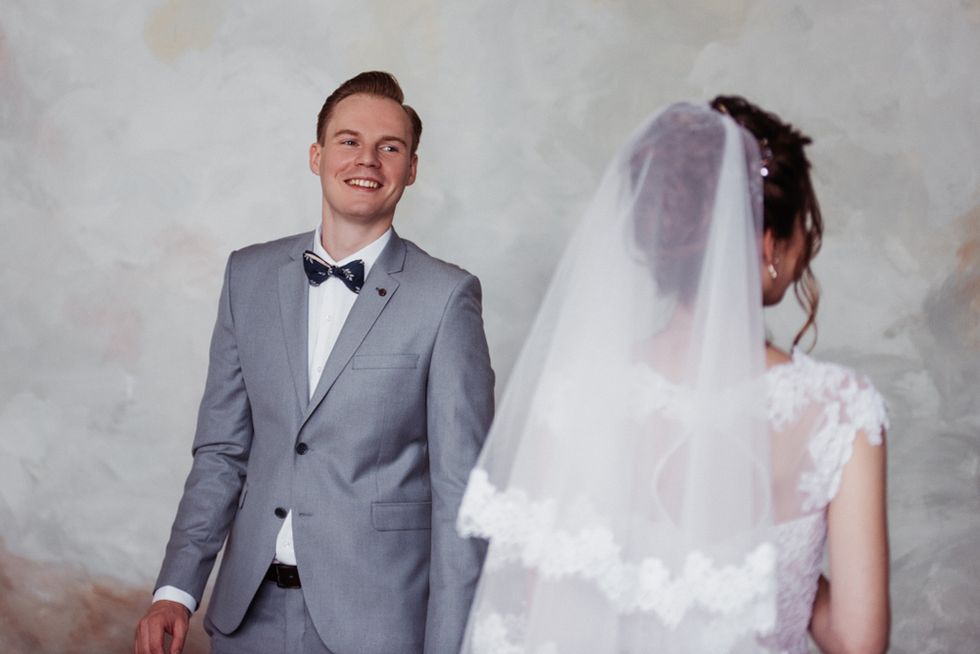 As wedding day disasters go, having the groom's mistress turn up in a full bridal gown is definitely up there with the worst of them. But this is what happened at a wedding in South Africa in June last year.

A video was posted on Twitter by one of the guests showing the drama unfold with the caption: "Side chick rocked up at the wedding also wearing a wedding dress. Groom trying to calm the situation."

The groom can be seen trying to placate the other woman while the bride looks on bemused. The video has recently been re-posted and gone viral with over 600,000 shares and 6,000 retweets.

Let's check it out and see what people thought of this catastrophic clash between bride and mistress.

How you imagine a wedding should be.

Yes, there may have been a few hiccups along the way, but the scene where Annie got married while her father looked on was damn near perfect. Not a dry eye in the house.

Versus what could actually happen.

Someone says the wrong name.

Who could forget the episode of Friends when Ross says Rachel's name at the alter instead of Emily's. Cringe factor 50.

The groom is an arsehole, commitment-phobe.

As if we would expect anything else from Big, but the look on Carrie's face when she confronts him will be forever etched in our minds. Our hearts broke with you Carrie.

The dreaded bridezilla or groomzilla, let's not be sexist. When wedding fever takes over your every being and you are incapable of rational thought. Ahh we remember those happy days.

Someone shares moments from the raucous hen party.

Some things are best left unspoken, or unshared in this case, and the hen (or stag) party is one of them. Who hasn't had a few too many at one of these and drunkenly gyrated in front of the stripper?

The pressure just becomes too much.

Ahh the day itself arrives and the pressure has been mounting for weeks, if not months. You are ready to snap. But what will you do? Scream at the mother of the bride? Throw an almighty strop? Or shave your head!

The groom's female best friend declares her love for him on the morning of the wedding.

Same sex friends can be worrying and if they are as gorgeous as Julia Roberts then you should know better than to invite them to your big day.

You just can't get the staff.

This hilarious moment from Four Weddings and a Funeral should act as a constant reminder to always check the capabilities of any employees connected to your wedding. It's only funny when it happens to someone else.

The bride has doubts. Serious doubts.

A little cold feet is natural but a full on sprint away from your future husband-to-be is not.

Possibly the worst that could happen, your psychopathic ex shows up.

An unlikely one but you never know with exes. Especially the jealous kind. Maybe just pack a discreet army knife to be on the safe side.

But pretty damn close is this wedding, where the groom's mistress showed up in a bride's dress.

Yep, this actually happened. This woman has some serious balls or she is crazy. Either way, it's hilarious to watch.

And here is the video itself. Enjoy.

Loving this guy's caption nearly as much as the video. Side Chick! We are guessing the actual bride must be the main course then!

Standard. That was pretty much our reaction as well. They could have at least tried to cover up their mirth, for politeness sake.

No f*cking way did that just happen.

Followers on Twitter cannot believe what they have just seen. Two brides, one wedding. The perfect name if ever this event was made into a film!

Bride and mistress stand off.

He mine b*tch. No he mine. Hahaha and the jokes just keep coming.

The groom is loving the attention.

If I play this right maybe it can end with a three-way? Here's to hoping. We have a feeling you may be disappointed with the actual end result. A woman scorned and all.

You'll get no sympathy here.

Not sure if he was actually expecting any but the world has no time for cheaters. And quite rightly so.

Where was the best man?

A good question. Surely that is one of the best man's main jobs? Looking out for any possible mistresses or ex-girlfriends who may be trying to sabotage the wedding. Especially if you know the groom is a little shady to say the least.

And what about family intervention?

@nkokhi How is the main chick still there patiently waiting for the wedding to continue? How is none of her friends… https://t.co/QEw06FFzNW
— Keli Laing (@Keli Laing)1529113161.0

There seems to be far too many people just sitting around watching the drama unfold, even the goddam bride herself. Someone put an end to this sh*t now.

One helpful observer suggested that one of the guests should have hoisted the mistress over their shoulder and shoved her into the boot of their car. Problem solved apparently.

Some suspect the bride already knew about the 'side kick'.

To be fair the bride did not look particularly shocked by the arrival of this other woman in a wedding dress. Could she have already known about her man's bit on the side?

Others mused about what excuses he could possibly come up with.

Even in this type of situation where it is crystal clear what is going on, men still be like "Babe it's not how it looks..."

One possibility being "Damn she crazy!"

"I have never seen this woman in my life before. I promise you. She is just some crazy hoe. We should feel sorry for her really."

Once a cheater always a cheater.

We wonder if this man has cheated again since? We suspect yes. This type of man will never change.

We actually feel quite sorry for Bride No.2, maybe she had only recently found out that her man (or so she thought) was getting married to someone else. Don't judge without the full story, that's our motto.

Summed it up in one word. #Awkward

Basically this whole video is the dictionary definition of awkward. At least for the groom anyhow.

Is this actually worse?

A Halloween wedding is quite out there but nowhere near in the same league as the mistress in a bride's dress. Beats Disney though.

Is this lady for real?

We really hope this is sarcasm. Give some (not all) men the opportunity and the means and they will be on it like a rat up a drainpipe. Are we wrong?

To conclude, in the words of Beyoncé...

If you like it then you shoulda put a ring on it... and made sure you properly ended it with the mistress first.