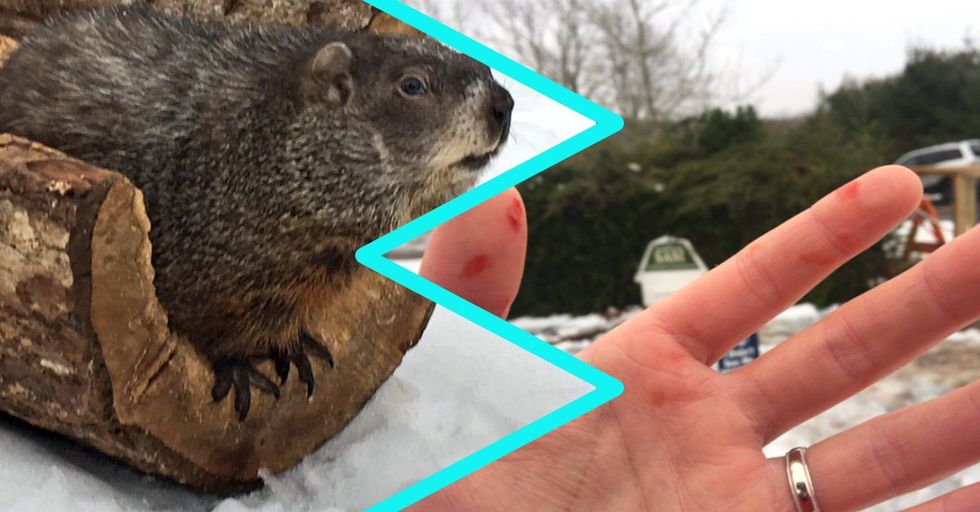 An intense escape. An injured reporter. A bloody hand. A furry, failed attempt at freedom. This was Groundhog's Day 2018 in Canada and there has been none like it in history. This is truly a story you have to read to believe and might convince you that Groundhog's Day could be the most exciting holiday to ever exist.

Not Your Average Holiday

Groundhog's Day is a tradition that many of us have question why we still practice this type of absurdity, but hey, it's kind of funny and groundhogs get no love any other day of the year so why not give them their own holiday and let them think they control the weather. Shubenacadie Sam is the Canadian version of Punxsutawney Phil and apparently, Canadian groundhogs have a little more attitude.

Sam woke up this morning for his shiny, celebrity moment, but had other plans in mind. He handled business first, played it cool and had everyone smiling and unsuspecting of his true intentions. First step: predict the weather with his magical, groundhog powers. Sam did not see his shadow, setting up our Canadian friends for an early spring. This brought joy for all who were watching.

Now that he has complete his weather forecast for another year, Shubenacadie Sam is having some fun playing outside… https://t.co/FneQPYWIxD
— Natasha Pace (@Natasha Pace)1517574631.0

Step two in Sam's master plan: pose pretty for the photos. Reporters were allowed into the groundhog enclosure to get close-up photos of Sam to celebrate his predictions. Among those reporters was Brett Ruskin, our victim.

Unsuspecting Brett, a reporter for CBC News in Nova Scotia, entered the enclosure to get some footage of Sam. Brett had tweeted earlier that day something that he may have regretted. He could not have predicted the events that were to take place but starting off the day by mocking the amazing Sam was probably not the best call.

VIDEO: After @ShubenacadieSam made his prediction and the crowds left, the media was let into his enclosure. Then h… https://t.co/vjgJbgq1OL
— Brett Ruskin (@Brett Ruskin)1517575869.0

From that point, everything was a furry, frenzied blur. Luckily Brett has the footage to prove what he could have never predicted to happen to him. Sam tried to make a quick escape and started to climb the fence that was closing him in. Brett, seeing a moment to rise up and save the day, chases after Sam as he scales the enclosure. He gets a firm grip on Sam's furry body as he holds on for dear life, so close to freedom he can probably taste it. Brett tries to pull him off the fence. Then, Sam goes in for the kill.

BAM. Sam did not hold back; he came for blood. He dug his little groundhog teeth into Brett's hand right before falling off the fence and scurrying across the snow, his master plan completely foiled. In the video, you can hear Brett laughing, saying "he bit me!" as those around him applaud Brett for saving Sam.

The bite drew blood and Brett took photos to show his followers the damage that was done. Some were loving the drama and the excitement that was coming from this normally uneventful holiday.

Others were worried that Brett should get some sort of rabies shot to combat the vicious bite of Sam, especially since it drew some serious blood. At first, Brett did not feel the need to take medical action and claimed he was fine, laughing off his injury. Apparently, he wasn't the first victim of Sam's vengeful ways and probably won't be the last.
There were quite a few animal activists on Twitter defending Sam, claiming this behavior shouldn't be surprising considering he's a wild animal. Others even said Brett deserved the bite for trying to grab Sam while he was frightened. There was some tension on Twitter; who was the real victim here?

Brett tweeted a video showing him in a doctor's room getting a shot saying, "Thanks, Sam" while a nurse sticks the needle in his arm and he smiles through the pain, taking his shot like a champ. I guess you can never be too careful, Brett. And for Sam, this was a good trial run. Not every escape artist gets it right on the first try, plus there's always next year. Unless we're Bill Murray and we're stuck in the time loop of Groundhog Day the movie, then Sam can try again every day until he gets it right. Best of luck to you, you fearless little fur ball.