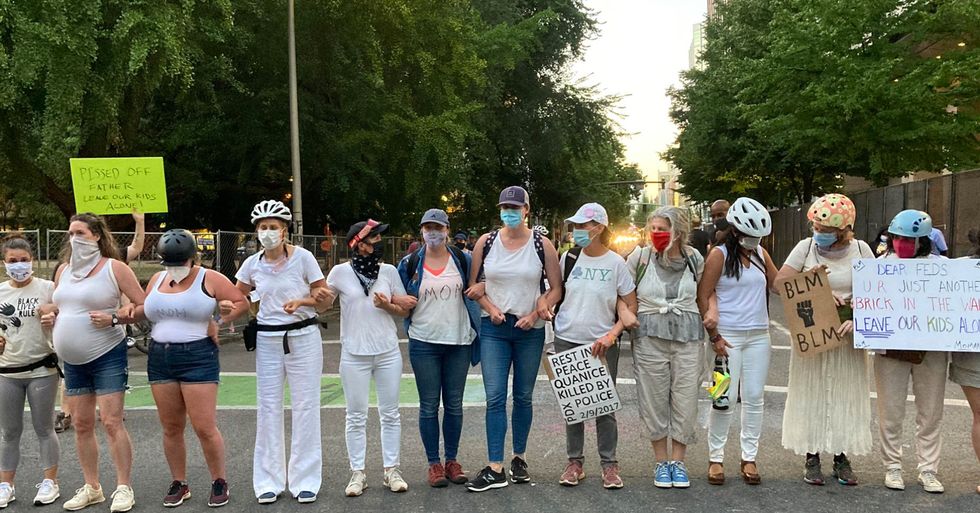 A group of heroic moms formed a human wall to protect BLM protestors from federal officers in Portland over the weekend and their selfless actions have spoken volumes...

In the last few months...

Since the tragic death of George Floyd in May...

Anger has erupted over the way in which black people are treated not only here in America... but across the entire world.

The Black Lives Matter movement is now bigger than ever...

But sadly, not everyone has been jumping on board.

Of course, racists and white supremacists have been protesting against BLM...

But one wouldn't expect police officers to be also doing this... right?

Ever since the first BLM protest took place in Minneapolis just days after Floyd's death...

The police have been ruthlessly dealing with protestors in the worst possible way.

And officers used weapons such as tear gas, batons, and rubber pellets to try and disperse the angry crowds.

Even though there was a percentage of violent rioters amongst the protestors...

Disturbed by the militarized response to people speaking out against police brutality in Minneapolis. The use of te… https://t.co/kKjbPqOPtC
— Kristen Clarke (@Kristen Clarke)1590595871.0

It was completely unacceptable for the officers to be treating innocent people in this way.

Here in America, we are living in utterly terrifying times...

A reminder that it was the Hennepin County (Minneapolis) police who traveled to Standing Rock to beat and tear gas… https://t.co/EIuGyZqFlg
— Jamie Henn (@Jamie Henn)1591021578.0

And the fact that we can't even join a peaceful protest without fearing our own law enforcement speaks volumes.

Well, it seems that a group of moms has decided that enough is enough...

And they've recently teamed together to try and help the peaceful BLM protestors.

It all happened in Portland, Oregon last week...

Federal officers, deployed in Portland by President Trump since last week, have led to escalating tensions in the city after protesters said the officers were violating their civil rights by roaming the streets in unmarked vans and detaining people without probable cause.

The officers have been using their now-normalized methods of tear gas and rubber bullets...

And this has caused things to get out of hand, resulting in innocent people getting hurt.

This is when the moms got involved.

A group of around thirty moms went viral online after they formed a barricade between federal officers and a large group of BLM protestors outside of a federal courthouse.

The women stood for a few hours outside the courthouse before federal officers used tear gas and flash bangs to disperse the crowd.

The group is called "Wall of Moms"...

And speaking to BuzzFeed News, organizer Bev Barnum spoke of their intentions. "We are about protecting peaceful citizens’ right to protest."

The moms deliberately dressed as normal as possible to avoid looking threatening.

"We wanted to look like we were going to Target, like normal people," Barnum said, adding that she hoped their non-threatening appearance would let them provide protection. However, she said that the mothers were later tear-gassed by federal officers.

Many of the moms involved had never attended a demonstration before...

But they were moved to action by the videos of federal officers detaining citizens with seemingly little cause.

Julia Peattie is one of these mothers...

"When I heard that this is like, where are we?" the 63-year-old retired teacher and part of the Wall of Moms group said. She posted videos and photos from the demonstration, and she said she left before officers used tear gas against the women on Saturday.

"There are all the times in one’s life when you hear about things in authoritarian regimes and Nazi Germany, and you say, ‘I wouldn’t put up with that.’ This is that time."

People are grateful, to say the least...

@RedTRaccoon Every news station should be showing a wall of moms, peacefully standing there, arms linked, while tru… https://t.co/F0eKcvvyH1
— TXPHred (@TXPHred)1595607027.0

And the bravery of these mothers is truly astounding.

They used their own white privilege to try and protect others.

Barnum said that she was hoping to use the "privilege" of being "white-appearing" to shield other protesters, whom officers were more likely to target. "We know from the timeline that they showed restraint," Barnum said, comparing the way federal authorities dispersed the mothers to the way they have been treating protesters on previous nights.

But she stressed how not all of the officers were intending to harm.

"We could tell by their body language. There were two federal officers in front of us that seemed to say, ‘We don’t want to shoot y'all,'" Barnum then said.

"This is about Black moms every day losing their children, husbands, brothers, friends."

"This is about Black Lives Matter. This is not about white women coming in to save the day," she said.

And we are still demanding the justice and equality that black people deserve. Keep on reading to learn about the BLM statue that was taken down after just one day...