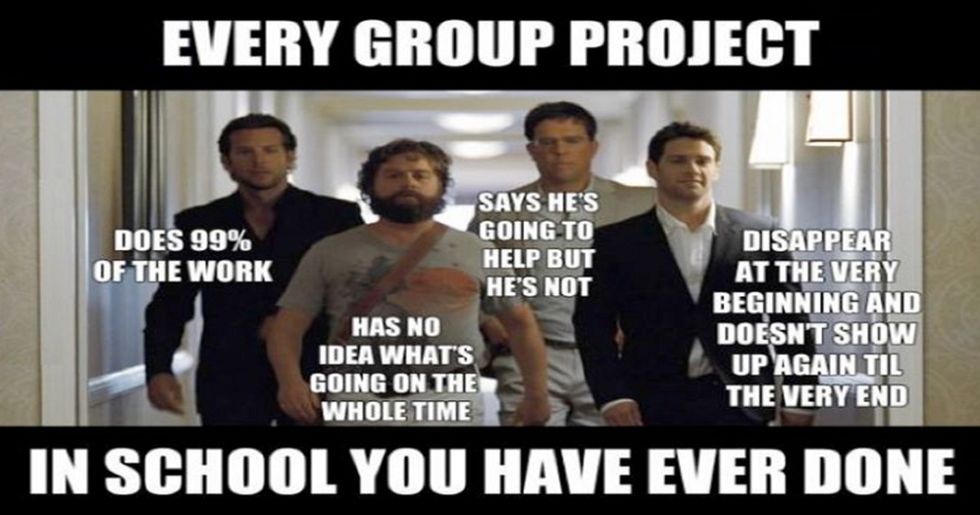 There are a lot of things that suck about school. Homework sucks. Pulling all-nighters is the absolute pits. All the drama can be super annoying. Trying to sharpen your pencil and ending up with a completely useless pencil is almost the most infuriating thing about academic life.

I say "almost" because, as we all know, the actual most infuriating thing about academic life is group projects.

There has never in the history of time been a group project where every group member did their allotted part of the assignment. There is always — ALWAYS — at least one person who just coasts by on everyone else's labor, and one person who ends up doing way more than their fair share in order to get a passing grade.

If you're a student, you already know this. I don't need to convince you. If you're reading this and you happen to be a teacher or professor, please stop assigning group work. I don't know what kind of benefits you think it has, but I can assure you there are none.

This guy tried to switch to another group for a better grade.

He didn’t do his part on the group project, gets mad that other group does not let him in and I won’t put his name on the paper (I ended up doing all the work). from ChoosingBeggars

Joke's on him, though. As it turns out, doing no work gets you a bad grade regardless of which group you're in.

Group projects have sucked throughout history.

Group projects through history from WhitePeopleTwitter

As I said, there's never been a successful group project. Even on ones where everyone ends up with a good grade, you can bet that there is plenty of resentment within the group.

There were four people in the group and four parts to the project. So, naturally, Allen did all four of them.

You never know who you're going to end up with.

Something tells me that he's not going to be a great lab partner. At least you can keep tabs on him by Googling his name, though.

When you have a group project. from teenagers

In my experience, the only time when your group members' parts of the project are readable is when they have copied and pasted something from Wikipedia.

To be fair, "Trust No One" is a good lesson to learn as soon as possible. Group projects don't disappear when you're out of school. They become projects that you get paid actual money for. And if you're the type of person who always ends up doing most of the project, well that's not going to change.

That's gonna be a swipe left.

You should ask if he wants to meet up! Then, when he gets there, pull out all of the project supplies and make him do his part.

You know, because the only reason someone would text another person is to try to hook up with them. It's not like texting is a valid form of communication used for types of messages.

They're gonna be busy.

You know what? I can at least give this person props for being honest about why they're going to be unavailable and trying to meet up beforehand. That counts for something, right?

A bad acid trip is a pretty valid excuse for missing class. Not sure I'd run that one by the teacher, though.

At least *someone* showed up.

Is it a little extra to put your name in every single role? Maybe. Is it also totally deserved? Absolutely.

This, on the other hand, is next-level petty.

I would Venmo 54 cents "on accident" and then ask for the penny back. That's just me, though.

It's one thing to be stuck with a group project in high school. But in college, I am paying tens of thousands of dollars for the opportunity of having my grade ruined by one lazy person. No, thank you.

group projects don't teach you how to work with others they teach you patience and how to deal with morons
— Ahmad Melhem (@Ahmad Melhem)1540809496.0

Unfortunately, you're going to be dealing with morons for a lot of your life. Maybe teachers figure we should start while we're still in school.

It's one or the other.

I wish there was a way to experience being a lame member of a group project without ruining everyone's grade. I would definitely give it a try at least once– it must be exhilarating.

No matter how small the task, the bad group member will find a way to mess it up. It's a fact of life.

You've got to love the Google Docs edit history. Thanks for your input, Nick.

A tale of two procrastinators.

Partner doesn’t turn in our shared work, forcing me to take a zero on the assignment from mildlyinfuriating

It seems to me like both group members missed their share of the work here– but at least one person did what they said they'd do. I would be printing out these texts and showing them to the teacher.

Thanks for the assist!

This always happens when one person does nothing but happens to be really good at presenting on-the-fly. It's so frustrating to see in action, but at least they won't actively sabotage your grade.

Foiled by the edit history yet again. "In combination" does sound a little more fancy, though. I think you could bump the grade up to .56 percent, at least.

Had this convo this time last week. She never wrote it. from ChoosingBeggars

Imagine being so confident in your role as a bad group member that you ask your partner to do all the work and then tell them you've lost respect for them when they refuse. It's pretty impressive.

Oh, you were in the hospital?

Finally, a subreddit I’ve been looking for! from ShittyGroupMembers

This is so, so sweet. That thumbs up at the end kills me.

I hate people like this. Now everyone else in our group has to cover for his pretentious, lazy ass. from iamverysmart

In that case, "I'm not quite sure I am able to" leave your name on the project. Maybe you should look up how to say "I'm the worst!" in Norwegian. You're gonna need it.

I hate group projects from ShittyGroupMembers

You just know this pair of texts was sent the night before a big assignment was due. I hope they still got a passing grade for themselves.

Group member asks a question about her assigned section then admits they have dropped the class two days before submission. from ShittyGroupMembers

I can't help but think that it may have been slightly better if you had, I don't know, let your group know you were dropping the class?!

Let me help you out with this one. This person is definitely going to drop out of the class, and you are going to be left holding the ball. I wouldn't wait for any further messages.

There is so much wrong with this one.

There's a lot to unpack here. The person leaving the group immediately after announcing they'd dropped the class is the perfect level of "well, good luck. This is not my problem anymore." And Cecelia? For shame!

If only there had been a way to contact anyone.

This only works if it's an online-only class. You saw them at least once a week.

At least Tyler is onboard.

Hey, that's not fair. At least Niall is there! I've had plenty of group project group members straight-up not show up at all. Got a lame group member you want to share a passive-aggressive message with? Share this with them! It should do the trick.