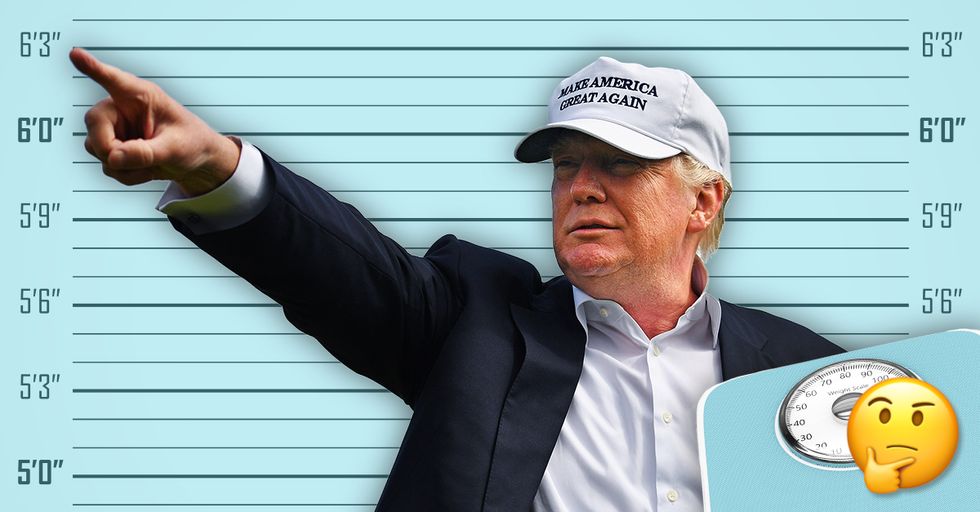 Our president would have you know that he is fit.

No, not just fit – the fittest. His muscles, they are iron. His genius, it is stable. His hair – lustrous and sensual as the day he emerged, fully formed, from his mother's womb.

In other words, Donald John Trump is healthy. Nay, not just healthy – he is the "healthiest individual ever elected to the presidency."

After all, Donald Trump is known to guzzle Diet Coke like there's no tomorrow (12 cans a day), and has a marked appetite for McDonalds and KFC. His diet would quite literally kill an ordinary man, but Trump is no ordinary man, as Dr. Ronny attests.
"It's called genetics," Jackson quipped. "Some people have just great genes. I told the president that if he had a healthier diet over the last 20 years he might live to be 200 years old." Jackson also pointed to the fact that the President, a life-long teetotaler, also has never smoked or done drugs.

While many people were understanding, albeit disappointed, about the President's health, there were a few skeptics and naysayers in the bunch. How could it be, many wondered, that the 71-year-old Trump, who stands 6 feet, 3 inches tall, weighs precisely 239 pounds – just one pound short of clinical obesity for his height? Thus was a movement born.

Has anyone coined "girther" for those who belive the president weighs more than his doctor reports?
— Chris Hayes (@Chris Hayes)1516138412.0

It's called the "Girther" movement, a clever play on the birther movement Trump himself championed by repeatedly sponsoring the idea that former President Obama was a foreign Muslim agent who was not, in fact, born in Hawaii, as claimed.

Yes, we're calling it the Girther Movement. @realDonaldTrump must step on a scale on live TV, and let beauty contestants judge the results. #GirtherMovement #Girther https://t.co/Mr90mTalOx

Trump and others in the birther movement repeatedly called for Obama's birth certificate to show definitive proof that he was an American citizen. In fact, Trump even offered $5 million for proof Obama had been born in the United States. How the tables have turned.

Many people either showed side by side comparisons of Trump and similarly sized men, or they posted pictures of athletes to show what a healthy person of Trump's height and weight looked like.

My new @DailyMail column is about the #Girther fat-shaming campaign against Donald Trump. Posting soon. pic.twitter.com/TvPZlKU2pp

Call Me A Girther! LOL pic.twitter.com/fYfIE9oH8s

People also wondered about the President's height, which somehow seemed... off..

For the record, @realDonaldTrump said he was 74 inches in 2012. Now his doctor says he's 75 inches. And that one inch makes is BMI "overweight" not "obese." I'm a #girther because old men don't GROW an inch! pic.twitter.com/ehNxF9PjPL

#Girther All three are 6'3" and weigh 239 pic.twitter.com/OtGFnwJC1a

Two 6'3" men standing next to each other. #Girther #GirtherMovement pic.twitter.com/yI14O6YpQ6

If they lied about height/weight, what else isn’t true? Thinking they picked numbers that allowed him to appear to be just under obese. His height can’t be 6’3" (see photo of him & Obama who is 6’1"). #Girther pic.twitter.com/EILOB01qId

One person, however, took the movement to the next logical, if slightly ridiculous level. Guardians of the Galaxy director James Gunn offered to pay $100,000 to the charity of Trump's choice if he would step on a scale.

I will give 100 thousand dollars to Trump's favorite charity if he will step on an accurate scale with an impartial medical professional, okayed by both of us. For real. #Girther #GirtherMovement

When asked what Trump's favorite charity was, Gunn had this to say:

I would be afraid that it's the Ku Klux Klan but there's no way in hell he's 239 pounds, so I don't have to worry about it.

Gunn clarified that he wasn't fat-shaming Trump, merely "continuous pattern of fabricating facts by both Trump and his administration."

This has nothing to do with fat shaming. It has to do with a continuous pattern of fabricating facts by both Trump and his administration. https://t.co/88Jw1pGLfe