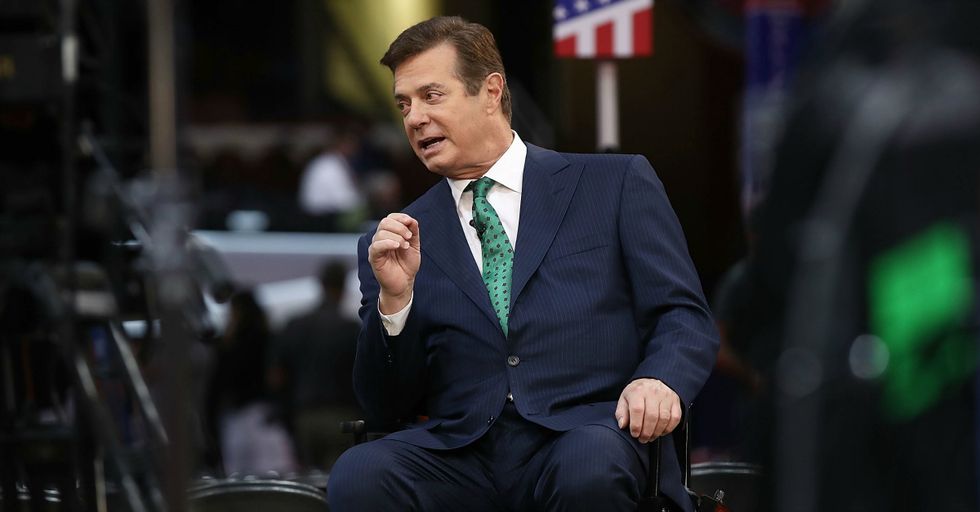 Remember that old game show Supermarket Sweep? Contestants had to wheel their carts up and down the aisles of a grocery store, grab items from the shelves willy-nilly, and hope that by the end of the round their cart would contain the most valuable items. It seems that's also the method used by former Trump campaign strategist Paul Manafort when shopping for his many suits. Wait until you hear how much he spent on only two shopping trips.

Paul Manafort was indicted on Monday.

Along with his former business associate Rick Gates, he is charged with several counts of money laundering and conspiracy against the United States. According to the charges filed, Manafort laundered more than $18 million in order to enjoy a very wealthy lifestyle within the states without ever having to pay taxes on that money. Apparently, part of that wealthy lifestyle required that he spend a lot of money on suits. Like, a lot of money.

$1.3 million! Dollars! More than a million of 'em! On clothes! The indictment doesn't reveal exactly where he spent the money, instead referring to the retail locations as "Vendor E: Men’s Clothing Store in New York" and “Vendor H: Clothing Store in Beverly Hills, California." It also doesn't provide an itemized list of what was purchased. However, during the early-morning raid at his house back in July, the FBI took many photos of his expensive suits. So yeah. It was probably suits. And maybe some extra expensive ties. Maybe he saw the above picture of him and thought to himself, "Man, what a frumpy suit! I should buy some better suits. More than one million dollars' worth of them."

In this picture, it's fun to imagine that Manafort is silently congratulating himself for having a better suit than the journalist who's interviewing him.

"That's a pretty nice suit," Manafort thinks to himself (probably). "But it's not as good as my suit that cost more than a new car. I did a very good job buying suits."

In this picture, Manafort is probably explaining to the woman attaching his mic that yes, his suit did cost more than what she earns in a year.

"And don't even get me started on the tie. This tie is worth more than your entire house. You see those red numbers over there? Pretend they're a price. This tie cost more than that." "...Sir, please just sit still and let me clip this mic on your lapel."

You've got to admit: The man has pretty good suits.

And after his indictment, maybe he'll be getting a new one! How do you think he'll look in black and white stripes?