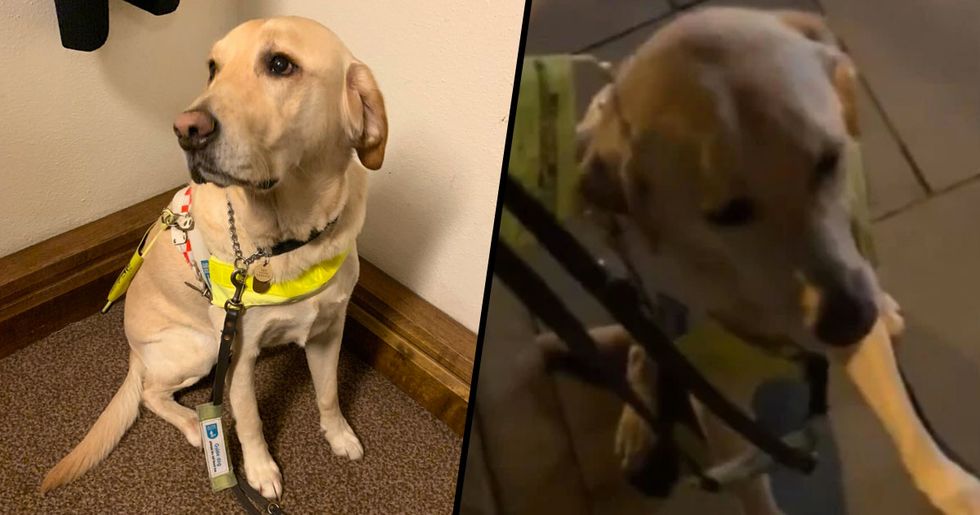 Each year when the 5th November comes around, flashes of colorful explosions appear in the sky across the UK in celebration of bonfire night. Whether it's a full-blown firework display or a low key at-home celebration with a few sparklers, for many, it's all in the name of good fun.

But, it's no secret that fireworks aren't for everyone - especially when it comes to the nation's most beloved pet... dogs. The loud bangs and unpredictable noise can be extremely distressing for dogs and it seems each year, more and more people are demanding increased regulations on fireworks for the sake of our pets.

Things can take an even more serious turn when it's a guide dog that's startled by fireworks. And that's exactly what happened to a guide dog named Skipp, who was left "rooted in fear" due to fireworks on the eve of bonfire night - leaving his disabled owner massively in danger.

Each year on the 5th of November, the UK celebrates bonfire night.

People of all ages across the UK celebrate the event with fireworks, bonfires, sparklers, and toffee apples.

Whether it's a huge community bonfire or a low-key gettogether in the back yard...

Most people enjoy seeing the colorful spectacles light up the sky.

Though it's all in the name of good fun, there's actually huge historical significance behind the celebration.

The annual event takes place on the anniversary of the so-called "gunpowder plot" in which, on 5 November 1605, a man named Guy Fawkes was arrested while guarding explosives plotters in the group had placed beneath the Houses of Parliament.

With the attempts to blow up Parliament coming to no avail...

People took to the streets of London to celebrate the fact that King James I had survived the attempt on his life - lighting bonfires around the city.

Within a few decades, the annual celebration became the predominant English state commemoration.

Traditionally, when people light bonfires to remember the event, there will be a mannequin man on the top of them representing Guy Fawkes.

But the night is now equally as much about fireworks as it is bonfires.

People will flock to firework displays to see the colorful explosions in their most extravagant form.

But not everyone is a fan of fireworks...

It's a common known fact that UK’s most beloved pet, the dog, is not at all a fan of fireworks. The noise and unpredictability of the explosions lead dogs to think that they are a threat, and dogs often feel nothing but fear when they see the flashes and hear the bangs.

It's lead many pet owners to demand tighter regulations on fireworks.

not to be a debbie downer but fireworks should be banned for public sale and only used in organised displays with a… https://t.co/3YAVkXDYGb
— georgia-anäis (@georgia-anäis)1572867393.0

Lots of people think fireworks shouldn't be available for purchase to the general public and should only be enjoyed within a contained firework display.

And the effects of fireworks on dogs can be fatal...

On Monday, it was revealed that an eighteen-week-old puppy had died after suffering a heart attack triggered by fireworks. Her devasted owner took to Facebook to warn others of the impacts of fireworks on pets: "Due to the enormous amount of fireworks with loud bangs going off around Wombwell and lower Darfield last night, we lost a young terrier with a heart attack." "Please think of the animals. Molly was only 18 weeks old and died of FRIGHT caused by fireworks."

Now the issue is in the spotlight more than ever.

After all, is it really worth causing so much distress to animals? Just for some pretty colors in the sky?

But, it's not just regular pooches that are impacted by fireworks...

So many people across the world rely on guide dogs to get through their daily lives. If a guide dog is startled by the loud bangs and explosions caused by fireworks - their owner's lives can be put in huge danger.

One woman has experienced these dangers first hand after her dog was left "rooted in fear" from fireworks.

Ellen Watson, who works as a clerk in the House of Commons, took to social media this week to warn others of the dangers of fireworks after nearby explosions left her guide dog, Skipp, terrified and frozen to the spot on their walk back from her work.

Ellen and Skipp weren't prepared for the fireworks as they were being let off the day before bonfire night.

Of course, people expect to hear fireworks on bonfire night and can put in the preparation to get themselves and their pets through the night safely. But, with the fireworks being set off unexpectedly at around 5pm the eve of bonfire night, it caught Ellen and Skipp off guard.

Ellen shared a heartbreaking clip of Skipp visibly terrified and shaking after hearing the loud bangs.

In the clip, Ellen can be seen trying to pull Skipp up from where he’d sat in the street, but the petrified dog resisted her efforts. Ellen eventually managed to get him to his feet but Skipp continued to refuse to move, leaving Ellen extremely vulnerable.

Ellen emphasized how fireworks not only cause distress to humans and dogs put pose a huge risk to disabled people's safety.

"This is my Guide Dog, on our way home from work at 5pm, rooted to the spot & shaking with fear after fireworks went off nearby. Not only do fireworks cause extreme distress for dogs & humans, they pose risk to disabled ppls safety. This has to stop. Fireworks NEED to be regulated," she wrote on Twitter.

Following the incident, Ellen changed her work schedule for the rest of the week to ensure she and Skipp would be home before dark.

She took extra precautions on bonfire night itself to keep Skipp calm- turning up the TV and putting on music to attempt to drown out the noise.

Ellen went on to explain that while she herself enjoys fireworks, the safety of people who rely on guide dogs need to be taking into consideration.

"Dogs are often life-changing or life-saving for people (especially assistance dogs). I’m not sure 5 mins of colorful popping has the same meaning for ppl. I love fireworks, just wish they’d stick to bonfire night and New Years so I can make plans for Skipp."

After watching the clip, several Twitter users expressed their concern.

So much so in fact, that Ellen updated everyone on how Skipp was doing. "The fireworks went on until very late last night, which was particularly scary for me. Mum let me snuggle up close with her so I felt safe."

Fireworks may be pretty to look at, but they have a real effect on the daily lives of people like Ellen.

The explosions, especially being set off before bonfire night itself, posed a huge risk to Ellen's life. It's simply not okay.

An online petition has even surfaced pushing for a review of the rules surrounding firework sales to protect animals from distress.

Clearly many people want to see a change as, at the time of writing, the petition has nearly 600,000 signatures. You can sign it here.