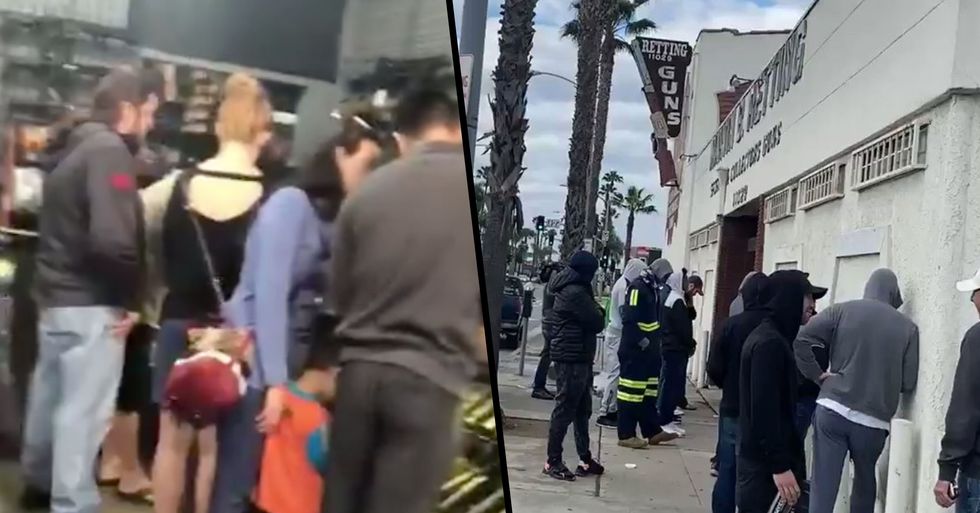 The cases here in the United States have been rising by the day and one worrying statistic has been noticed since the outbreak - and that's the rise in gun sales.

People all over the world have been buying in bulk and completely emptying shelves in supermarkets...

But a worrying statistic has emerged from here in the U.S of what us Americans have been panic buying the most... and it's not toilet roll.

It has emerged that in California, Washington, and New York, gun sales have risen massively.

Some buyers have sought to "protect their families" from looters should food and supplies run out due to coronavirus panic.

Many of these buyers also feared that the government would restrict their access to guns...

Whilst a lot of Asian-Americans have resorted to buying guns for protection against racist hate crimes - which have been a problem since the pandemic broke out.

A local gun shop in Los Angeles was seen with queues spilling out of the front door...

And things now seem to be truly getting out of hand.

People are buying out of fear...

A man who lined up outside the Martin B. Retting store on Saturday told the LA Times, "Politicians and anti-gun people have been telling us for the longest time that we don’t need guns."

"But right now, a lot of people are truly scared, and they can make that decision themselves."

People are spending a lot of money...

Another man spent $1,500 at a store in Germantown, Wisconsin and told USA Today, "There's so much uncertainty and paranoia but you've got to protect your own."

These stats come just one day after President Trump urged citizens to "not stock pile"...

He also urged us to "take things easy." Buying guns does not qualify for taking things easy.

Trump insists that everything is "under control"...

But only time will tell. Make sure to stay posted for further updates, and for more on the pandemic, keep scrolling to learn every film and TV show that has been canceled or delayed because 0f COVID-19.