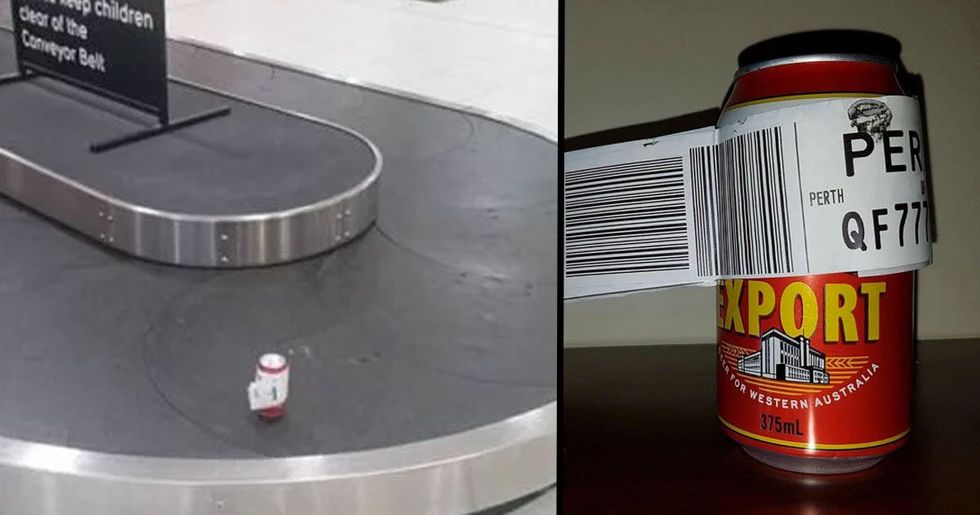 Aussie’s have always had an affinity for beer. Beer and Australia go together like a roo and a kanga, like reef and coastline, like a surf board and a shark tooth necklace. Separating the Aussie from his beer can be a trying and difficult manoeuvre. On one Quantus flight to Perth, an Australian man was told that he couldn’t bring his beer onto the flight with him. So he wasted no time in checking it it, and waiting for it to roll out the other side at baggage reclaim. However, a beer is nothing, in this article we’ll take you through some of the most outrageous items lost at the airport. Things are going to get weird.

Australians like to drink, and that's not just a stereotype.

In 2016-17, Australians drank oner 186 million litres of pure alcohol. That’s 9.4 litres for every man woman and teenager over 15 years old.

They have hundreds of mainstream beer brands and rank above the UK in beers-per-capita… and that’s saying something.

It was a flight to Perth with Quantus.

Him and his mates decided to check it in...

His beer was tagged and sent off with the other baggage. The staff happily complied.

Turns out he had an inside hand…

"My mate works at the airport and we hatched the plan as a laugh — I half didn’t expect it to come out the other end."

Here’s the beer, tagged and ready to go.

There’s something quite heartwarming about it.

Here it is coming off the dispenser

Who left that beer there?

I think this guy just about sums it up.

Now, let us take you on a strange journey.

Airport staff actually have a much more surreal job than you’d think. Here’s a list of amazing abandoned luggage items taken in airports. We have Ranker to thank for this list.

What were they planning on doing with these? Some kind of voodoo ritual.

Now that’s how to travel!

Jesus, this is getting a bit meta.

Evidently for a time traveller with a drug problem.

In case you don’t know what this is - and you definitely don’t - it’s a seriously hefty Tibetan instrument. Why would someone go to the trouble of getting one of these only to lose it.

I do always feel under-protected and exposed when I fly.

You know… for the plane… but in the luggage…

A real artefact: 'Each set of 13 features images of Jesus and the 12 apostles carved into the handle.’

There’s going to be a very solemn Chinese New Year somewhere in the world.

It’s either a smuggler or a kingpin kid - $500 stuffed inside her head.

I’m serious! The actual Hoggle! He lives in the Unclaimed Baggage Museum now. I wonder if that’s where Bowie is?

The price of that thing must be through the roof. Those are so rare.

This is getting trippy. ‘Authorities in Malaysia found no less than 300 rare, live tortoises and a bunch of drugs in two suitcases on a flight bound for Madagascar.’

The mummified falcon was found at customs and sold at Christies.

Someone found this in Australia. Why would you travel with it all at once? This is what happens when you’re a sloppy smuggler.

Just put it in your bum you idiot! Actually, on second thoughts…

Pity the poor customs officer who found that one.

Again… no pain no game here people. Keeping it in your sock just isn’t going to cut it. This is all your fault.

Last But Not Least - A wife

'A Frenchman tried to smuggle his Russian wife into the EU by packing her into a suitcase but was foiled after Polish border guards spotting his suspiciously large luggage.’ Oh my god…