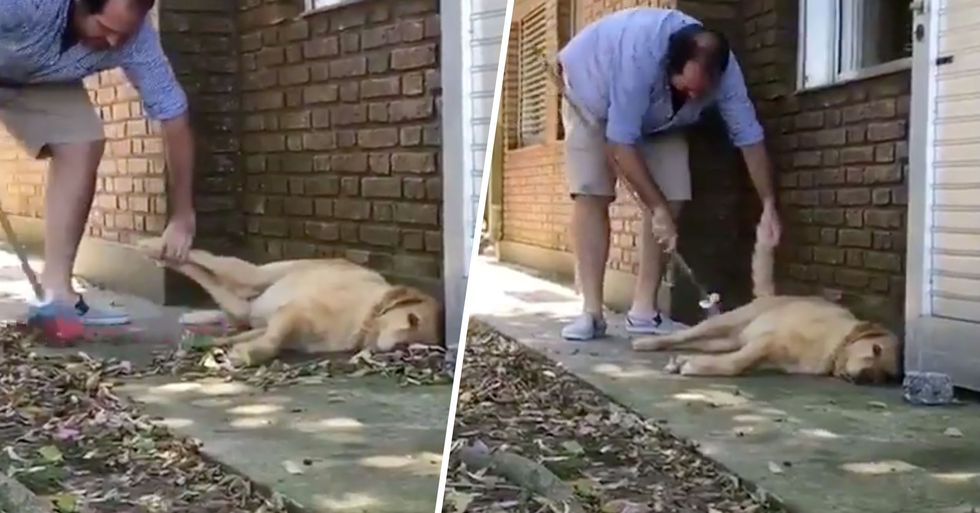 It's also no secret that dogs can be rather lazy at times, and that is certainly the case for one sloth-like dog, who has aptly earnt himself the name "Lazy."

A video has surfaced of Lazy's owner doing chores around her and it's truly cracking up the internet.

Because let’s face it, dogs are the most loyal pet you can have.

Our beloved canines love to laze around.

That they start to resemble a sloth.

But one lazy doggo has been cracking up the internet this week.

Why? Because she's simply so lazy. In fact, her name is even Lazy (yes, really).

A video surfaced of Lazy's owner attempting to do chores...

And it's taken the internet by storm. Keep scrolling to watch.

In the clip, her owner can be seen attempting to sweep up.

But Lazy refuses to move...forcing her owner to sweep around her.

So, instead of moving her...

Her owner lifts her legs up to brush underneath them and gently places them back down.

It makes for hilarious viewing.

And people were quick to react, with many saying the related to the pooch's lazy ways.

And several fellow pooch parents shared their own experiences.

"Typical laborador! Mine does the same thing too, but when he sees or smells food that's a different story," shared one user.

Interested in more dog news? Keep scrolling to learn more about a doggo who walks 4 miles every day to say hi to everyone in town...