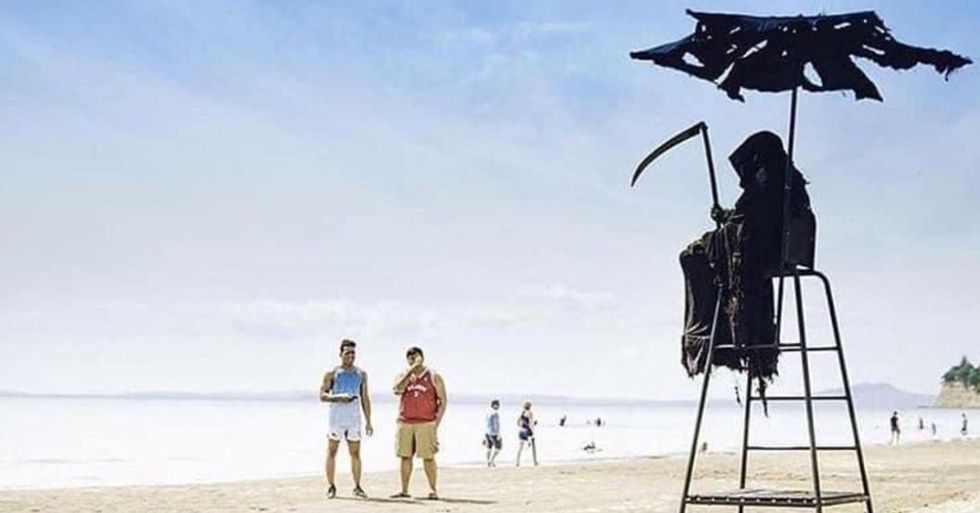 Guy Dressing as Grim Reaper on Beaches That Have Reopened Prematurely

Since the reopening of a number of Florida beaches, people haven't been happy with this huge risk; so one man has decided to make a peculiar promise to dress up as the Grim Reaper on the beaches that have reopened...

Last month's scenes at the Clearwater Beach in Florida showed a lot of people completely disregarding these global warnings.

And 867 people in the state have now died, showing exactly what happens when people congregate in mass gatherings.

Beaches in Jacksonville, Florida, reopened to the public last week.

Who knows when the rest of Florida's beaches will begin to reopen to the public?

And who knows how many more people will continue to lose their lives to this deadly virus.

Well, even though we can't answer that right now...

One man has made a promise to try and spread the warning around Florida beaches.

Many of you have asked if I am willing to travel around Florida wearing Grim Reaper attire to the beaches and other… https://t.co/9GtvtDTqYo
— Daniel Uhlfelder (@Daniel Uhlfelder)1587524573.0

He promises to dress up as the Grim Reaper and travel around Florida's reopened beaches from the 1st of May if people continue to visit them. Fair enough... right?

He is using it as a campaign to support the Democrats...

We will use this as a campaign to ensure people know the importance of staying home while supporting Democrats runn… https://t.co/zIMOXOvegy
— Daniel Uhlfelder (@Daniel Uhlfelder)1587524667.0

And to also raise awareness of the importance of self-isolating and staying at home during the pandemic.

Daniel is aiming to raise $20,000 to contribute directly to federal candidates between now and May the 1st...

And finally, for that burning question...

Daniel does have his Grim Reaper costume ready!

And in the meantime, keep scrolling to read about New York's amazing tribute to their essential workers...
20%

$19.44 $15.55
Buy Now
See More Deals
We hope you find these deals as awesome as we do! Just an FYI: we may receive a share of sales from links on this page