Guy Fieri Donated Food to Sonoma Fire Victims — but in a Bizarre Twist, People Are Furious at Him for It | 22 Words 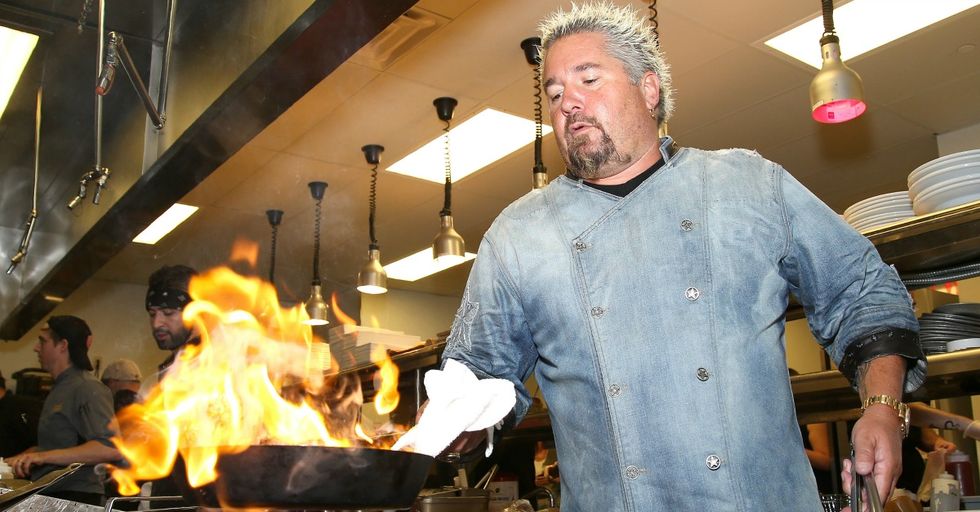 Guy Fieri Donated Food to Sonoma Fire Victims — but in a Bizarre Twist, People Are Furious at Him for It

Guy Fieri woke up at 2AM to the smell of thick smoke outside his Sonoma home. He and his wife packed up their truck with their dogs and evacuated as quickly as they could. Their house was spared from the horrific fires burning through Northern California, but the same couldn't be said for their neighbors just a couple blocks over in the small town of Santa Rosa.

It's where he grew up and started his restaurants. When so many people were in trouble there, he knew he had to help.

So he stopped what he was doing to set up shop temporarily in Sonoma. He gathered a team and used a mobile grill to serve meals to evacuees and volunteers.

Fieri teamed up with Salvation Army and has been preparing over 5,000 meals a day. He said,"I've got a lot of people coming together and a lot of great chefs are going to come and help. We're going to make people happy. We're going to give them a little moment. I think food is always — we call it comfort food because it makes you feel good."

But of course, people found a way to be angry at the Mayor of Flavortown for his good deeds.

They said that it was insensitive that he used a BBQ to prepare his meals since people had just lost their homes in a wildfire. But wait, how do you prepare a ton of food on the fly without a BBQ? Is there some sort of toaster technology that we don't know about? Would they have preferred that Fieri cook each meal individually in thousands of tiny toaster ovens?

This guy suggested soup would be a better, less insensitive option.

People responded, saying that soup just wouldn't cut it for people doing physical labor all day. Is this guy just a troll, or does he really believe that Guy Fieri BBQing for needy people is rude?

Fieri isn't looking for attention. "This isn't a PR stunt," he said. "You don't see my banners up. I'm not promoting anything. I'm just here cooking. This is feeding people. People need help, and I'm here to help. That's it." Fieri is doing a lot of good work, out of the kindness of his heart for these people. That's more than can be said for some...

Sam White just about sums that up in this tweet.

The fires in Northern California have been the deadliest in modern history, and yet President Trump has not talked about them once, not to mention tried to offer help in any way. Just let that sink it: Guy Fieri is doing more to help victims of the fires that the president of the United States.

Fieri released a statement that said,"This ordeal is far from over and the need is only growing."

He tweeted a link where you can donate to his fundraiser for the victims of the fires in Northern California. On the fundraiser page, he wrote, "I’ve seen a level of destruction in my hometown that I never thought imaginable.  But even bigger than the fires has been the outpouring of support and compassion for our community, here in Sonoma County and beyond.  Together with The Salvation Army, and thanks to a virtual army of volunteers, we’ve been cookin’ up hot meals for thousands of people who need it most every day.  But this ordeal is far from over and the need is only growing." And in true Flavortown mayor fashion, he signed it, "Love, Peace & Taco Grease, Guy Fieri." Thanks for your great work, Guy!