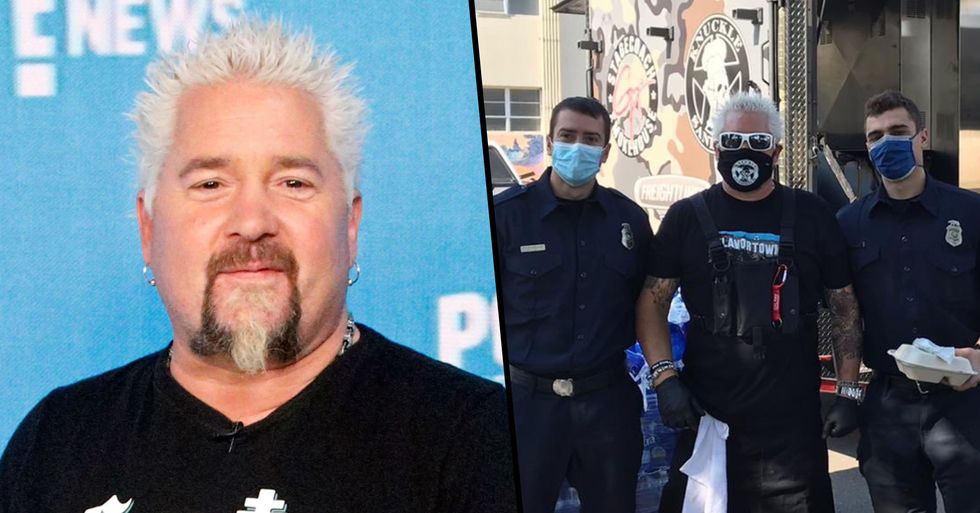 In yet another selfless act of kindness, celebrity chef Guy Fieri has gone out of his way to hand out free meals to California's wildfire response team.

Keep scrolling to read more about his generous offer, and to see the delicious meals he rustled up for the hardworking staff members...

If you needed any convincing that Guy Fieri is an amazing person...

Most of you will recognize Fieri as the winner of The Next Food Network Star.

Following this 2006 win, the colorful culinary personality went on to host several food-themed shows, including Diners, Drive-Ins and Dives, and Guy's Grocery Games.

Fieri quickly became known for his loud and eccentric demeanor...

And, while most loved him for it, others weren't a huge fan of his "obnoxious" and "crude" mannerisms and jokes.

The celebrity chef has been in the headlines an awful lot these last few months...

And it's often for the most heartwarming of reasons.

During this ongoing medical pandemic, Fieri has been giving a little back.

First, he lent a helping hand to America's struggling restaurants and their staff.

He sprung into action to help the restaurants and their staff...

As he knew how hard hit they were going to be during the pandemic.

In March, the chef launched the Restaurant Employee Relief Fund.

The campaign associated with the fund raises money to give one-time $500 grants to impacted workers.

Guy explained how he raised the money so quickly...

On TMZ Live he explained: "I started thinking about my brothers and sisters in the restaurant industry and about a bunch of restaurants I was closing and we had to do something".

It was this that spurred him to partner up with the National Restaurant Association Educational Foundation.

And with that, Fieri began sending out personal invitations to CEOs all cross the catering business.

The money is available as a one time grant for any hospitality worker to apply for if they are facing hardship.

And Fieri hasn't stopped there...

It seems the celebrity chef has even more to give.

Fieri has also been lending a helping hand to the COVID first responders.

The boxes, which each contained a signed signature by Fieri, included a delicious concoction of food...

Such as pulled pork, pasta with vegetables, and Caesar salad and focaccia with caramelized onion and parmesan.

Grateful healthcare workers could be seen donning their scrubs and facemasks...

As they queued patiently for their meals.

"It's just a way to come and say thank you."

As he was signing boxes in a YouTube video, Fieri explained: "So we have so many amazing frontline healthcare workers that are putting their lives on the line to support our community as they always do, but now it's even more severe,"

Other members of the hospitality industry helped to cook and provide the meals...

"I got all kinds of friends and business owners that are here in the trailer," Fieri added. "We're going to do about 1200 meals today and these folks are amazing. We should all be singing their praises."

“You guys are just warriors."

You can watch the video from his kind gesture here. But his latest gesture may have just cemented him as the most charitable celebrity out there...

Yes, Fieri is at it again.

This time, it's the first responders to the California wildfires Fieri is helping out.

And he was helping in the best way possible.

With delicious Italian food, of course!

And it certainly seems his efforts were appreciated.

A MILLION THANKS to @GuyFieri and his talented team for bringing his delicious delights to #GlassFire base camp! He… https://t.co/F7K8HuXCVt
— CAL FIRE LNU (@CAL FIRE LNU)1601750249.0