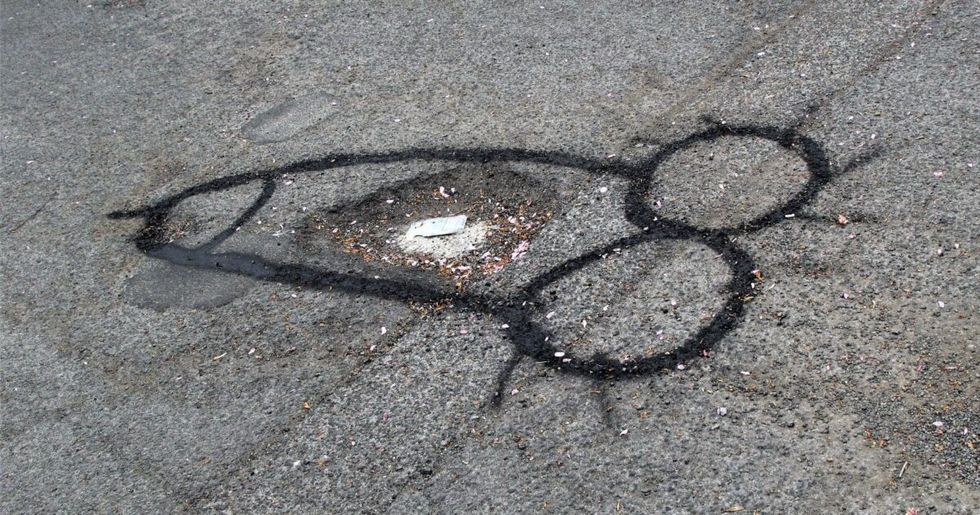 Guy Gets City to Fix Potholes by Drawing Penises Around Them

Potholes are a serious annoyance, aren’t they? They deflate tires and take weeks to be repaired. But just how far would you go to get them fixed?

One guy spray-painted penises around potholes to force the council to repair them.

Photos of the phallic-adorned road in Middlesbrough, UK, were posted to a community Facebook page. The power of the peen was enough to motivate the council to patch up the potholes just days afterwards. Result!

So, what happened, exactly? Read on to find out!

When the snow and freezing weather strikes…

Out come the potholes. They’re a darned annoyance.

But we have to grin and bear them, as they often sit there for ages – no one comes to fix them for what feels like an eternity.

Come spring, a lot of us like to give our houses and backyards a deep clean.

That might involve collecting leaves from last fall, clearing up trash that was blown in over winter and even re-painting your shed.

But what if you had to clean a whole goddamn city? That’s just insane...

Imagine how long that would take! A loooooooong time.

When spring rolls around, a city should be able to make financial arrangements appropriately and be able to employ the right number of crews to make the clearing up process easier, don’t you think?

Most residents will experience pothole problems in their neighborhood.

Like, who really wants a mahoosive, car-shattering pothole sat in the middle of their street for weeks on end? You get so frustrated that the problem hasn’t been solved that you start to doubt whether or not it ever will be.

But what happens when you report the problem?

Absolutely nothing. For ages. It doesn’t mean that your pothole problem will get fixed. Na ah. In fact, even the ones you saw as a kid are likely to be seen again a decade or so later when you point them out to your own children!

One community in the UK got incredibly fed up with avoiding potholes that hadn’t been sorted out in over a year.

The locals had protested numerous times but to no avail. So, one guy stepped up the game.

Brad Nicholson, a resident of Middlesbrough, took to graffiti to get his message across.

Using a few cans of spray paint, Brad drew wieners around every single pothole to prove his point.

Impressive, huh? Drawing phallic images around potholes is certainly one way to get heads turning.

The locals are singing the guy’s praises.

We’ll give him a grade A for effort. But we’re not so sure about his art skills. It's not the most beautiful street art we’ve ever seen...

We mean, this is street art…

A lot of effort's gone into creating that piece of wall art - like, how many hues of color are in that picture? Kinda’ cool, right?

And this one’s even cooler.

This picture of a painting by the artist collective named Black Lines was taken in Paris. It depicts Christophe Dettinger, the former professional boxer, who’d made a name for himself by punching gendarmes.

We digress. The point is…

This graffiti scheme got the pothole point across, big time. The guy’s penis protest prompted the council to patch-over the potholes. Winning!

But it was a precarious action to take, right?

Because, let’s face it, the guy could’ve found himself in tons of trouble for the graffiti, not to mention the fact the council may still not have bothered to fix the potholes. Buy hey. When push comes to shove, you gotta do what you gotta do.

It only took a few days before the spray-painted wieners vanished – and the potholes, too.

Brad shared the pic of the filled-in holes on a community Facebook page, captioning it, “The power of the willy."

The willies certainly had the desired effect…

You can see from the picture how the potholes would’ve been really tricky to avoid when driving around the corner. Brad’s spray-painting did the trick; potholes were swiftly repaired all around Middlesbrough!

So, all those hours in school spent drawing penises rather than actually learning anything really paid off.

It's a good job that Brad didn't listen in class!

There have been plenty of other cases of spray-painted genitalia being used to spark action by the council.

Earlier this year, a mystery spray-painter, known as “wanksy", used penile protests in Essex, UK, to prompt the authorities to start repairs.

A cyclist had crashed due to the state of the roads and a Manchester man drew penises around potholes so that the city would fix them.

“Potholes are dangerous," it states on his website. “Not only do they wreck vehicles and cause accidents, they also injure cyclists and are a danger to pedestrians."

He feels that his work generates a “positive" reaction.

"I am a qualified artist, the naked body and its anatomy are commonplace in art," he says. “The drawings themselves are cartoons, not photographs. Art should provoke a reaction and these pieces do that, generally a positive one."

But what did the internet think about Middleborough Council's attempts to patch-over the potholes?

Not much, actually. Someone posted, “Well done Middlesbrough Council?" Hope you're being sarcastic; the roads are a disgrace. Besides that's not repaired, it's PATCHED, so will break up again soon."

Another went on to say…

“Bad job, it's a sticking plaster. They should have planed the bottom end out and resurfaced it, as the road end is a turn point," said the Facebook user. “So, vehicles, when turning the wheel, will break the patch and, Bob's ya uncle, back to square one. Council wasted money there."

The comments didn’t stop there.

“Where there’s a willy, there’s a way," one commenter mused. Someone else said, “Can’t beat a big willy for getting action." The cheeky monkeys.

But then, things started getting pretty heated…

“We car owners pay bloody enough for road tax and car repairs through these bloody holes. I like to see patchwork fields and meadows but not patchwork roads and pavements. Middlesbrough is a bloody disgrace." Oh dear.

Middleborough Council stated that pothole repairs are done in order of priority.

A spokesman for Middlesbrough Council said: "Middlesbrough, like all local authority areas in the country, has issues with potholes and repairs are carried out on a priority basis determined by the risk they pose to highway users. "Currently, however, we are carrying out pre-planned works in the Acklam area and staff were able to visit the nearby site on Fane Grove when the matter was reported to us and have patched over the hole."

But Brad claimed that the potholes had been there for over a year.

Apparently, they appeared two years ago, but only became a real issue around a year ago. "It's about time something was done about all the potholes in Middlesbrough," he said.

But we reckon it was Brad’s phallic art that kicked the council into action.

Don’t you? We mean, it seems very convenient the potholes were fixed right after Brad shared the pic on Facebook, right?

But, hey. We’re just glad the pothole problem was finally dealt with.

Maybe just don't try this one out at home though, right?