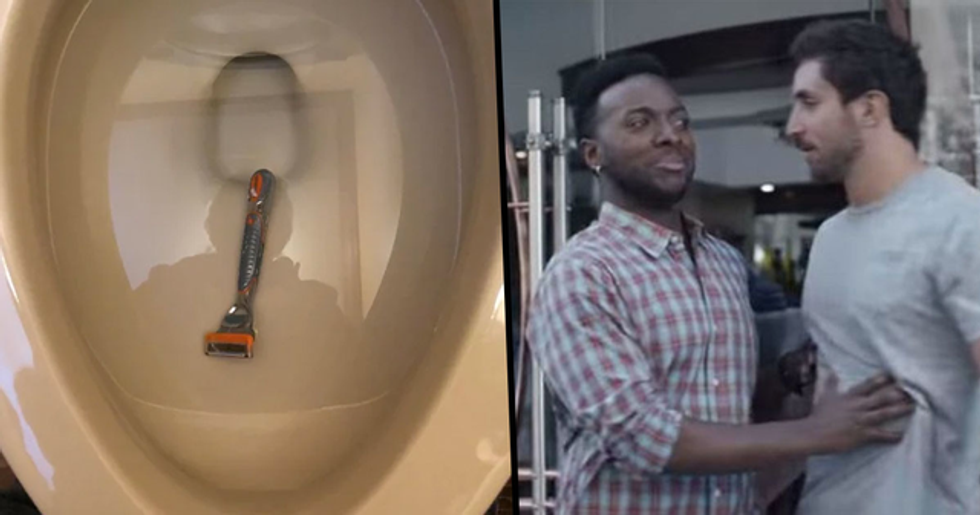 Guy Gets Hilariously Trolled After Throwing Gillette Razor Down The Toilet

For those who missed it, Gillette released a controversial advert earlier this week. In it, they targeted some stereotypical toxic male behaviour, including catcalling, mansplaining, bullying, homophobia and sexual assault. So some nice light watching then.

However, nothing is ever simple in this world, and many were infuriated by the viral ad. So much so, in fact, that a few individuals started a movement to boycott Gillette, in order to stand up for their masculinity (or something).

But one Gillette boycotter took things a step further. He let his actions speak louder than his words, showing a picture of his Gillette razor sat at the bottom of a toilet bowl. Wow - that'll really show the liberals! As you may expect, the internet had something to say about this - and the responses are particularly beautiful.

#TheBestMenCanBe is always evolving, but shaping the men of tomorrow starts with actions we take today. Join us at… https://t.co/CGPqsQ6SXT
— Gillette (@Gillette)1547476211.0

For those who missed it, here's the ad in full.

The short film, presented on Gillette's YouTube channel, tackles all manner of toxic, (typically) male behaviour - including bullying, sexism, sexual harassment and more. It has currently been viewed over 16 million times.

A lot of the response was highly positive.

Many people loved the positive social message of the advert. Plus, it's great to see a brand step out of the box a little, and concern themselves with making a bigger difference in the world.

And for many, the advert got them right in the feels. We have to say, we're fans, too.

Those who loved the ad felt really passionate.

However, not everyone felt the same way.

There were some ad-viewers who were absolutely infuriated by the video and campaign.

Some of the responses were fairly simple.

It's hard to argue that the best place to hurt a company is on their bottom line. Suddenly, it seemed a boycott was afoot.

Some felt the ad was too harsh on masculinity.

They felt the ad was attacking the very people it hoped would purchase Gillette's razors.

Although, some angry responses were a little funny.

It's weird how being called out for things that can be proven to be happening in the world causes some people to get quite so... defensive.

As a commenter on a Buzzfeed article put it, "how did we make a society that finds "don't sexually harass women, don't let boys or men assault each other, and treat each other with respect" a controversial message?"

But one man took his boycott of Gillette one step further.

A Twitter user was not content merely to stop purchasing Gillette. He was not even okay with simply tossing his current razor in the bin.

Yes, that's right. He was so angry with a literal advert, that he had to throw his razor... down the toilet?

The man was so infuriated by an advert which was essentially saying that men should behave in a non-abusive way, that he threw his razor down the toilet.

The more you think about it, the weirder it gets.

We mean, getting a razor into the toilet bowl is pretty easy. But getting it out? That's, like, a whole other story.

Can you flush a razor?

We're guessing the short answer is no. And the long answer, while probably a little more complicated, is still also no.

Perhaps plumbing is another enemy to masculinity! Maybe flushing razors is another way of sticking it to the man!

But Twitter's responses to this man's bizarre protest really did have us giggling.

Because if this guy couldn't flush the razor ...

@warroom Now show us the picture where you fished it out of the toilet because you can't flush a razor
— Thor Benson (@Thor Benson)1547600106.0

Yep, that's right. He'd have to put his hand down the toilet to fish the razor out.

So, in case you aren't following, this guy must have voluntarily stuck his hand down the toilet to prove a point to a massive razor company. Got it?

As you may expect, Twitter had the perfect response.

@warroom You paid for that razor. You now have to put your hand in the toilet to throw that out. You literally owned yourself.
— Tony Posnanski (@Tony Posnanski)1547600068.0

We're guessing the original poster quickly realised what a bad idea this whole thing had been.

Take another look at that toilet picture and you'll notice something very weird - and sad, too.

There's a reflection in the toilet water.

In perhaps the saddest image on the internet (and that is a highly contested category), people realised that the reflection of the "protester" could also be made out.

Some thought the reflection added a nice artistic touch.

There is something aesthetically appealing about the sad reflection hovering over a needlessly wasted razor in a toilet bowl. We're thinking of commissioning a painting.

Luckily, the original poster returned to reassure us.

For anyone worried about his plumbing - worry not. He did not flush the razor.

But, as Twitter quickly pointed out, the alternative wasn't much better.

If the guy didn't flush the razor, then that means he had to stick his hand into the toilet. Which is not much better.

It's safe to say this "protest" wasn't too effective.

Who's the real loser here? Gillette? Or the guy who had to shove his hand down the toilet?

Twitter really came into its own on this one.

The new Gillette ad made someone have a tantrum and throw away his razor in the toilet. The responses to it are go… https://t.co/EKsrp5KefT
— Brian Murray (@Brian Murray)1547661912.0

If you're in need of a laugh, we highly recommend a scroll through the original Twitter thread.

There have also been some pretty great memes on the topic.

For a group who think everyone gets offended too easily, these guys are sure quick to get offended.

We particularly love this one.

Giving men a taste of what women experience every day, all through the medium of a razor advert. Good job.

Internet, we salute you!

We love it when everyone unites to take on someone who's just hateful. Long may this tradition continue!