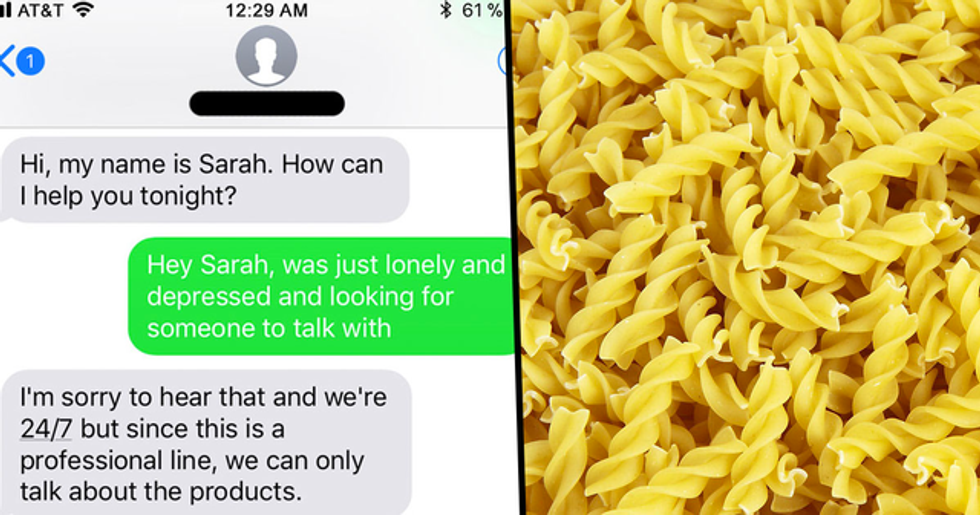 Depression is something many people struggle with, and finding the right person to talk to about it can make the struggle seem all the more intense. Alongside friends and family, though, there are a range of amazing services for those struggling with their mental health. Many depression crisis lines are available for times of emergency, and are a simple call or text away.

But one man decided to take a different route this week. Instead of texting a depression crisis line, he instead reached out for comfort in an unlikely place - a pasta company. Instead of redirecting the issue, the pasta-company employee ran with it and gave the man some much-needed support, albeit in a slightly unusual format.

The internet has gone wild for this heartwarming story, and we can't get enough of it either. It's always amazing to be reminded that there are good people in the world, and that many of them can be found where you'd least expect them.

Depression is something many face.

The mental illness is categorized by low mood and a feeling of bleakness, although it shouldn't be confused with feeling sad once in a while.

Those who have struggled know it's far more than that.

Depression can actually feel like an imbalance within the sufferers brain. In spite of how isolating it can feel, depression is actually surprisingly common.

But it can often be hugely isolating, nonetheless.

One of the many complicated facets of depression is that it can make the sufferer feel very alone. Reaching out for help is essential to recovery, but it can feel impossible.

Modern technology has come up with an innovative solution.

It can feel too daunting for those suffering from depression to reach out to the people closest to them - but there is a valuable alternative.

There are many depression crisis lines for those in need.

These can take the form on phone calls or text conversations with a friendly stranger. They're there for people who just need to be able to talk.

They can help people realise they aren't alone.

They're often also volunteer run, and are proof that the goodness of humanity still exists.

The simple act of being able to reach out can be valuable.

Knowing that whatever is being faced doesn't have to be dealt with alone can be the turning point in someone's recovery.

But this weekend, a man suffering from depression took a different route.

Rather than reaching out to a regular depression crisis line, the man instead looked for help in the unlikeliest of places.

The man instead texted a pasta company for help.

Whether it was an accident or an intentional decision is still up in the air. But either way, the man received far better advice than you may expect.

We all know pasta has some definite cheering properties.

It can absolutely be a mood booster - but we weren't too sure of its credentials when it comes to actually tackling mental illness.

But the response the man received was truly amazing.

Not only is it proof that there are good people in the world, but it serves as a reminder that you aren't alone, and that help can come from a variety of sources.

The man reached out to the company via text.

And the response (which comes from an employee known only as "Sarah") was truly astounding.

It's clear Sarah wanted to help.

But as she was working in a professional capacity, she apologised and told the man she could really only discuss the product in question - pasta.

However, the writer of the text came up with a way around this.

Instead of talking about his mental illness overtly, he came up with an analogy which perfectly related to what Sarah was allowed to discuss with him.

The man wrote Sarah a description of a disastrous lasagna making process, which was also a perfect allegory for the struggle of depression.

And Sarah did something surprising.

Instead of pointing the man in another direction, she decided to just go with it. Sarah offered the man some pasta-related advice, which could (not coincidentally) be applied to depression, also.

Sarah pointed out that mistakes can always be fixed.

She reassured the man that trying again and not giving up was the real key to success - both in lasagna-making, and in mental illness recovery.

After all, a good lasagna is a beautiful thing.

And it seems a real shame to throw the whole thing out just because of one small, rectifiable mistake!

The man asked how many times before the lasagna was past saving.

But Sarah offered a truly uplifting message. "You'd be surprised how resilient noodles can be," she reassured the man.

When making pasta, things can not go according to plan.

But learning from mistakes and keeping on going is the key. Frankly, we're amazed by how far this analogy really goes.

And even though it can sometimes be filled with unexpected trials and tribulations, in the end, it'll all be worthwhile.

Superficially, the connection between pasta and depression has always been clear.

But Sarah expanded it and gave us a truly beautiful message about the human spirit. But also, pasta is just great.

And everyone appreciated it.

People couldn't get enough of Sarah's beautiful message, and this uplifting story as a whole. It has an overriding message of pure hope.

This goes beyond just customer service.

One commenter wrote that they hoped Sarah had received praise from her workplace, too - after all, we bet this man is going to be a faithful customer for life!

We bet he's happy he accidentally got in touch with Sarah.

And if Sarah ever fancies a change of career, she'd certainly be an excellent motivational speaker!

Many who read this text exchange commented that the message helped them, too, realise that they aren't alone.

This story is giving us big feels.

Sarah is truly amazing for going way above her pay grade to help out a stranger in need. Consider our faith in humanity restored.

We hope it serves as a valuable reminder.

No matter how alone you feel, there is someone out there who will want to help. Although we can't guarantee that every pasta company employee will be quite as receptive as Sarah.

So it may be safer to stick to the professionals.

And allow pasta companies to be what they are - a source of valuable information on any delicious, comforting meal.

Sarah, you are our hero.

If you, or anyone you know, is struggling with mental health issues, you should not hesitate to reach out. You can find more information here. Now, who's for a bowl of pasta?