Guy Gets Super-Aggressive With a Girl He Just Met, and His Texts Will Freak You Out | 22 Words 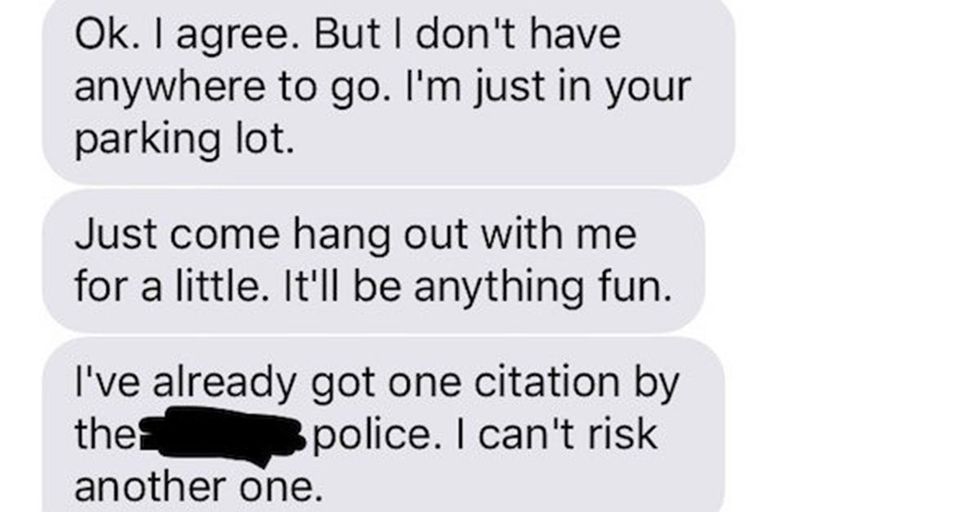 Guy Gets Super-Aggressive With a Girl He Just Met, and His Texts Will Freak You Out

Not only can this guy not take a hint, but he rants on and on like a drunk person. Maybe that's because he IS drunk, but there's still no excuse for this type of insistence. He's not mean, but you just want this dude to go away.

I don't know what this "shivering" business is, but that's just the tip of the iceberg.

It's immediately clear that she said her apartment was messy to keep him away. He did NOT get that hint. Or any of the ten million to follow.

Her response is "We just met." Fair enough, right?

Not for this guy, who starts to weave together a very bizarre sob story about how his roommate has his GF over, which means he has to leave. What a weird living arrangement! But that's the least of the issues here.

She responds nicely enough to what's turning into quite a saga.

But of all the places he chooses to sober up, he picks her parking lot? Does that mean he drove drunk to her house to be near her? UGH.

If he's worried about coming across as a freak, he's not helping his cause.

He either isn't getting the hint or he doesn't care about what she's trying to convey. Sadly, I think it's the latter.

"Hang out with me for a little. It will be fun."

Uh, no. Then he tops that ridiculous comment with "I can't get your smell off my mind." Run, don't walk away from this train wreck of a human being.

He persists, as you would expect.

He says just tell him to go home and he will. Well, she clearly already did that, so this is getting a little freaky. I think the only person with a "troubled spirit" is this dude.

It goes on. Wow. Hard to imagine why this guy has troubling meeting women.

I'm sure his offer of breakfast isn't going to change her mind. She was polite, but you can see she's let this go as graciously as possible.

I'm sure she's not feeling much like a winner after this exchange. He says how embarrassed he feels, but that's not enough to make up for this ridiculous display. This might be the biggest example of how dating can go wrong. At least he didn't do anything physical or violent, but...yikes.