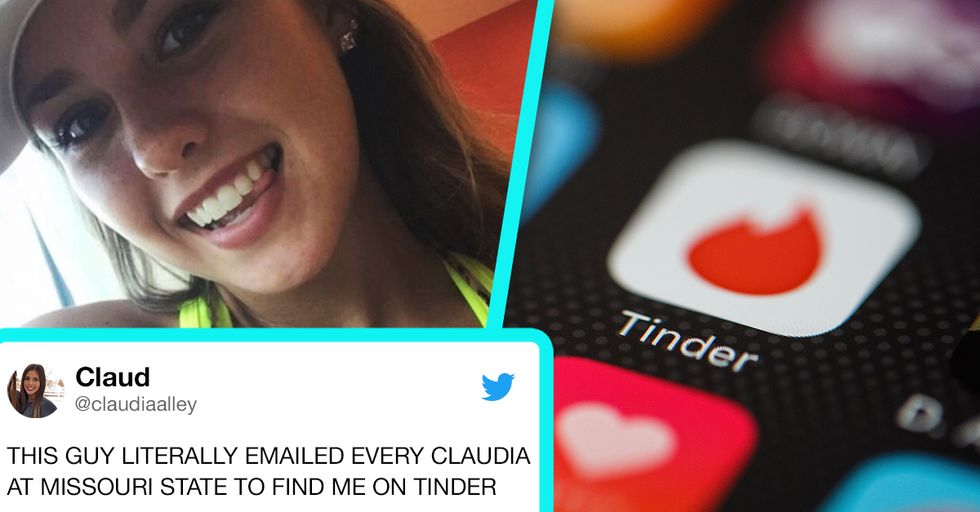 It's a jungle out there, folks.

Getting a date has never been the easiest feat on the planet. You might think that all of yesteryear's difficulties were solved by today's Tinders and Bumbles what have you, but you'd be very wrong. As it turns out, modern dating apps come with their own host of problems. That's exactly what a young man named Hayden learned this week.

Hayden, a student at Missouri State University, was swiping through Tinder (as college students do) when he came across the profile of a woman named Claudia:

He was struck by her profile. All that was left to do was swipe right in order to communicate his interest.

But that's not what happened.

Alas, our poor friend Hayden swiped left instead! In case you're not hip to the Tinder (people call it "the Tinder," right?), swiping left means you're not interested. Whoops!

This was a mistake of epic proportions. But Hayden had a plan.

He knew the woman's name (Claudia) and that she's also a student at Missouri State. So he decided to do what any completely normal college student would do.

He sent an email to every single Missouri State student named Claudia.

"I made a rookie mistake on Tinder," he said, then going on to explain the predicament in which he found himself. He described Claudia's profile to the best of his memory.

In his quest to find the correct Claudia, Hayden also promised donuts. Let that be a lesson to you. If you're trying to connect with someone, donuts is always a good move. Apparently, his email worked...

Claudia — the one Hayden had been searching for — got the email and revealed it was meant for her. Hayden's plan had worked!

Obviously, the Internet was super impressed with Hayden's super sleuthing.

You have to admit that his dedication to finding Claudia is pretty impressive. Imagine how many student names he had to scroll through!

Next time your grandparents start bragging about how their courtship involved sending letters across the country for year after year, regale them with the saga of Hayden and Claudia.

Of course, some people found the gesture a little less than romantic.

And to be fair, this kind of behavior definitely could have been considered creepy. However, Hayden was very clear in his message that Claudia was welcome to reject his offer of donuts.

Now, people just want to know if Hayden and Claudia got a "happily ever after."

Unfortunately, there hasn't been an official update. However, the two are reportedly following each other on Instagram, so that's definitely something.