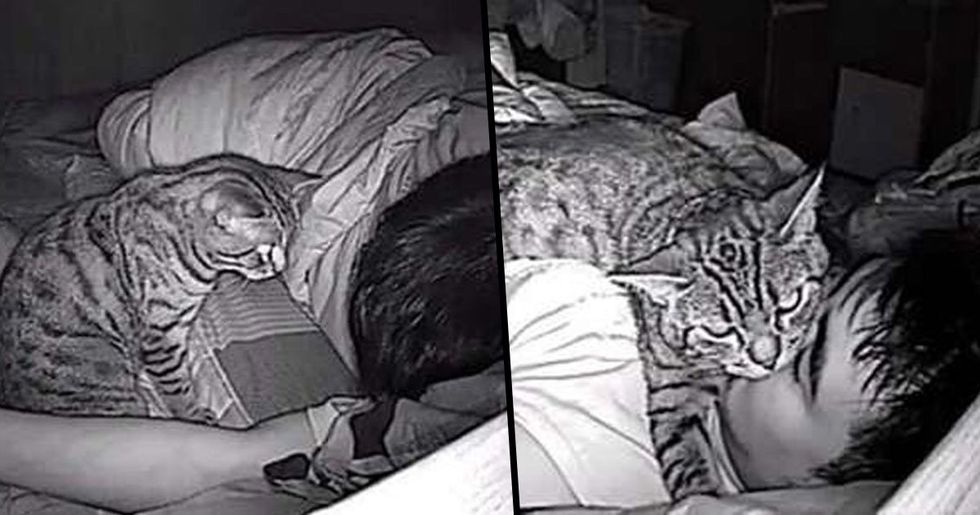 We all like to believe that our pets love us just as much as we love them.

With dogs, this is usually the case. Our pups seem to love us more than life itself and simply cannot do enough to be in our company.

Cats, on the other hand... they can be a bit trickier. Though there are, admittedly, some affectionate felines out there, cats generally have a more hostile disposition than dogs do, and are well-known for their permanently nonchalant attitudes.

But, despite how moody your cats can be, would they ever try to kill you?

One pet owner from Thailand made a somewhat alarming discovery after installing surveillance cameras around his house... It turns out that his pet cat was getting a little too snuggly at night, and was literally suffocating him by laying over his face while he slept.

Keep scrolling to see the footage, which has divided people on the cat's true motives.

Pet ownership is at an all-time high.

More people than ever before are investing in a four-legged companion, with a survey in 2018 finding that 71.1 million households across the United States now have at least one pet.

And our feline friends come out on top as the most popular pet.

I know, it's hard to believe. But, somehow, cats have beaten dogs to the hot spot, with roughly 88.3 million felines being kept as pets across the United States, and only 74.8 million pooches.

It turns out that we just love our cats.

Because, let's be real, people. The neediness of dogs can get downright annoying, and there's nothing quite as soothing as a purring kitty to cuddle up to at the end of a long day.

Cats have been our favorite companions for thousands of years.

Originating back to ancient Egypt, cats gradually became domesticated around 4,000 years ago. Early Egyptians worshipped a cat goddess and even mummified their beloved pets for their journey to the next world, which spurred other cultures around the world to also adopt felines as pets.

And they have entertained us ever since.

Everyone has, at some point in their lives, sat and googled funny cat videos on the internet for hours on end. Because what's more entertaining than videos of cats wearing cute sunglasses?

Though, despite how cute they are...

Some people still insist that cats are evil.

Some believe that our furry friends are plotting against us...

And that they will one day conquer the human race and take over the world.

Okay, that may be a little dramatic.

But it is undeniable that some cats can have a sinister edge about them.

And one guy has gone viral with a sinister discovery about his own feline friend.

Meet Lomphonten Lomphontan and his tabby cat, Achi, both from Thailand.

Speaking to The Dodo, Lomphonten explained that Achi is extremely affectionate for a cat, and loves nothing more than curling up and snoozing in his lap.

Though Achi may love his owner a little too much...

Enough that he has actually been partially suffocating his owner while he sleeps at night.

Lomphonten made the discovery after setting up surveillance equipment in his home.

He had set up a hidden camera in his house to keep tabs on Achi while he was away at work. However, the most interesting footage came when Lomphonten decided to face the camera toward his bed throughout the night.

It turns out that Achi had been making himself rather comfortable.

Directly on top of Lomphonten's face, that is. Though he was used to Achi being affectionate, Lomphonten had never exected the cat to cuddle up in such close proximity.

And his discovery explained those alarming dreams perfectly. The footage showed how Achi would delicately climb onto his unsuspecting owner's chest, then curl up and plonk himself directly over his face.

But he isn't at all alarmed by his cat's act of "suffocation." It's quite common for cats to lay themselves across their owner's neck or face, mainly because it's the warmest spot on the body.

And Lomphonten knows just how much Achi loves him.

He hasn't been fazed by the cat's cuddles and sees it simply as a sign of affection. "I sat and watched [the footage] one night. It was very funny. I feel very much in love with him that he loves me like this." He explained in an interview, "It's a show of love."

Though some people disagree.

Some Twitter users are adamant that Achi's cuddles aren't as cute as they look.

But a lot of people shared their own pet's cuddles...

It turns out that Achi isn't the only mischievous feline out there.

There's an awful lot of suffocation going on out there.

So this is definitely a thing... and it's absolutely adorable.

Maybe our cats do love us after all...

Contrary to prior belief, it could be possible that, instead of silently plotting to kill us, our cats are actually trying to tell us that they love us and appreciate everything that we do for them. Okay, considering that I am a huge cat lover, maybe I'm being a little optimistic...