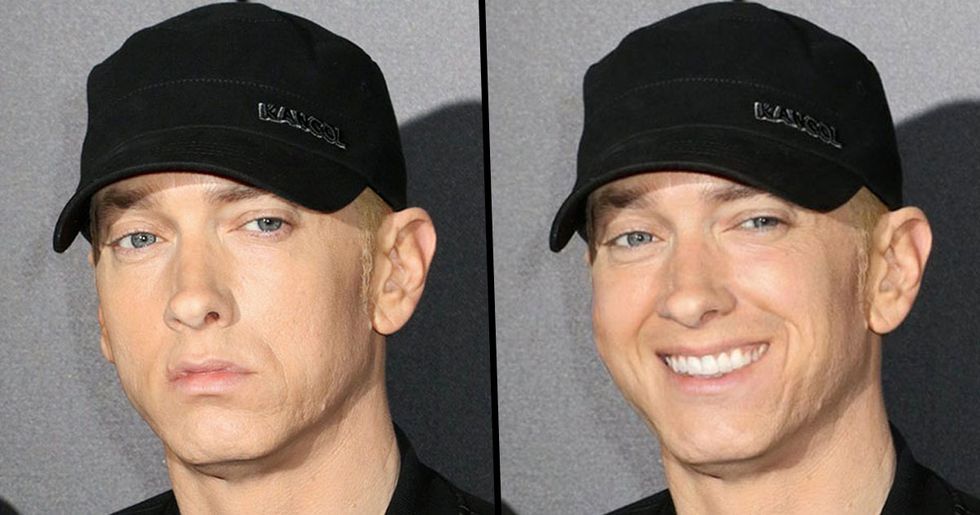 Eminem is best known for a few different things. He gave us some of the best rap hits of the '00s, an iconic bleach blond hair do, and an unbelievable amount of divorce related drama. But one fan noticed something else about the hip hop sensation.

You've probably seen hundreds of pics of Eminem, right? But have you ever seen him smiling? Think about it. It's a surprisingly rare sight.

So one Photoshop expert decided to turn Eminem's frown upside down, and "fix" all these moody photographs. He's taken a selection of photos of the musician, whether they're paparazzi shots from events or more artsy images from photoshoots. And where Eminem's signature grimace would usually be, the fan has added a big cheesy grin. It's a simple idea, but the results are surprisingly hilarious - and the internet thinks so, too.

He's often cited as one of the most influential and prolific rappers of all time, and is also a producer, actors and record exec. He first came on the scene in the late '90s.

He had a signature rap style, and uniquely dark and funny lyrics. On top of this, Eminem was great at shocking the general public.

He consistently makes lists of the greatest musicians of all time, and has been referred to as the "King of Hip Hop."

Eminem has had a long and enviable career.

The star has won tons of musical awards, alongside acting work in film and television. He was the first rapper to win an Academy Award for Best Original Song, and is one of the best-selling artists of all time.

For those who grew up in the '00s, Eminem was a consistent soundtrack.

His back catalogue of hits is truly incredible, and even those who don't usually like rap tend to have a soft spot for at least a couple of Eminem hits.

He was the first to coin the term "Stan," which means obsessive, crazy fan. The internet has taken this term and run with it.

He's still making music to this day, and has an enormous and dedicated fan base. Fun fact - Eminem holds the record for most albums going straight to number one in a row, with an amazing nine.

They tell me I’ve been here before... this time (sober) I’ll definitely remember! Thank you Hawaii for a great kic… https://t.co/HgLx3IC8Uj
— Marshall Mathers (@Marshall Mathers)1550358928.0

Eminem is currently on tour and selling out venues around the world, to much public acclaim. On top of that, he seems to be personally in a really good place, too.

It seems the star has plenty to smile about.

Which you would think would be reflected in his face - but that just doesn't seem to be happening.

Scour the web, and try to find pictures of Eminem grinning.

From his career beginnings until now, finding the rapper with a smile on his face seems almost impossible.

You'd think he had plenty to smile about.

But in pretty much every picture you can find, Eminem is holding his mouth in a firm grimace. He tends to look either bored, angry, or just plain scary.

We're pretty sure it's a calculated move on his part.

It's important to have an intimidating persona when in the public eye - particularly in the world of hip hop.

But Eminem seems so down in the dumps!

This is a guy with a career anyone would be jealous of, plus three beautiful kids. So what's with all the scowling?

We know Eminem does have a sense of humor.

His lyrics are filled with funny imagery and dark innuendo. But it seems Eminem wants to contrast that with a more sullen appearance.

Fans had noticed this before.

It was even an online joke that Eminem seemed to never want to crack a smile in public, but one fan set out to change that.

And we don't imagine Eminem will be too thrilled with the results.

In any images we could find of the star starting to smile, he appears to try to suppress his grins. We're pretty sure this stony-faced exterior is a calculated move.

It happens too often for it to be a coincidence!

Eminem even has a signature smile-stifling expression, where he sticks his tongue into his cheeks to avoid flashing his teeth.

The odd smiles you can track down are more like this.

Obviously fake, forced, and, frankly, a little bit creepy. One fan and Photoshopper wanted to change all that.

Mike Brown got busy with the photo-editing tool.

And the results are just fantastic. The fan took to Facebook to show off his creations.

Some are kind of believable.

Like this image of the rapper with his fingers in his ears and a blissed-out, trance-like grin on his face.

Or this (slightly creepier) pic.

While Eminem doesn't exactly look happy in this image, per se, it doesn't look obviously Photoshopped either.

Some of the images were a little goofier.

Like this one, which has an almost cartoonish quality, and has the potential for some excellent future memes.

Some were just plain odd.

It's like your brain knows the image isn't real, but can't help trying to make sense of Eminem's facial expression anyway.

In some, Eminem looks like a totally different person.

Like this creepy dude. Either way, this is a simple idea which is surprisingly hilarious.

His Facebook page is filled with hysterical Photoshopped smiles. For example, this image, which makes Nirvana look like a cheesy boy band.

Brown even got historical.

This image of Abraham Lincoln certainly robs the ex-President of some of his dignity and power. Brown even pointed out how much he looks like a certain daytime television host.

People had some hilarious reactions.

Many pointed out how similar these Eminem images look to some of the internet's most famous fake smiles.

Some of the pics are quite frightening.

While it's clear Eminem deliberately maintains a straight face to uphold a scary persona, some of these "smiling" versions are even scarier!

Especially when they're so obvious and forced. We feel like we want to look at something more wholesome now!

Although we must admit these pics made us genuinely smile.

We hope this is an internet trend which continues. There are tons of celebrities we'd love to see with a fake grin plastered across their face!