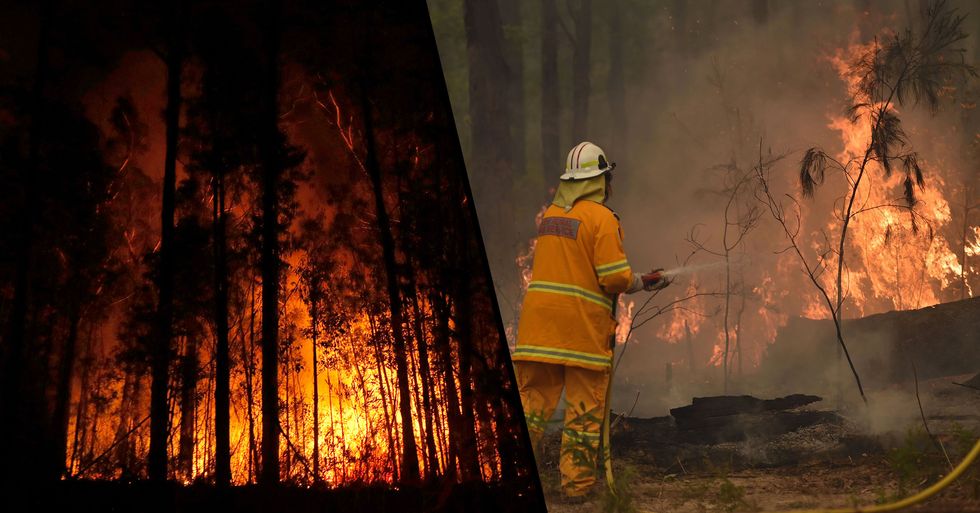 Australia is in the midst of one of the worst bushfire crises the world has ever seen. Since September, entire communities have been engulfed by relentless heat and fires, resulting in the death and destruction of millions of animals and native bushland.

The conditions that the Australian people are currently living under are simply unimaginable... So one man decided to give a little bit of context for those who are lucky enough to have never experienced such devastation.

Australia is currently being ravaged by one of the worst bush fire crises the world has seen in decades.

And New South Wales, in particular, is suffering immensely at the moment.

There have been fires reported in every state, but New South Wales is truly taking a beating by bush fires and is undoubtedly the hardest hit. According to CNN, so far, in New South Wales alone, more than 2000 homes have been destroyed.

Business Insider reported that close to a hundred and thirty bush fires continue to burn in populated coastal and inland regions to the city's north.

In total, more than 5.9 million hectares (14.6 million acres) have been burned, CNN reports, and over half a million animals, birds, and reptiles have perished. And those who managed to escape the flames have lost their homes and all their possessions.

The scenes are truly apocalyptic, making the rest of us incredibly thankful for what we have.

Most of us can only imagine what it's like to live under such terrifying conditions...

So one Australian man decided to give a simple account of just what's at stake for the country's inhabitants.

Brodie, who lives and works as a historian in Germany, is Australian and wanted to highlight the severity of the situation in his home country.

He started by giving a little perspective to those who live overseas...

Landmass larger than the entire country of Belgium is currently burning in Australia, and air quality is effected up to 2,000km away. Just let that sink in.

He posted a few maps, just to give perspective.

And he highlighted the sheer scale of the fires.

The fire trail in the state of New South Wales alone could stretch from Sydney to Afghanistan.

The Australian government couldn't be handling the situation any worse...

"Climate change is a 'political issue' that shouldn’t be discussed at this time, apparently."

He went on to outline a heartbreaking insight into the life of the thousands of volunteer firefighters...

And explained how, despite their tremendous bravery, the sheer danger they are putting themselves in, and their commitment to saving their land and the lives of the people and wildlife, they aren't getting paid a single penny. Where is the justice?

And he couldn't miss this little fact out...

Australia's Prime Minister, Scott Morrison, decided to take a little vacation to Hawaii while his country burned. I mean, that's one way you can say you just don't care...

But it turns out that Scott Morrison isn't the only government official to take off on vacation...

The New South Wales emergency services minister has also taken a quick break. Not the most convenient time to top up the tan, is it?

And he brought up the whole firework issue...

Despite the horrific blazes ravaging the country, governments across all states authorized their annual firework displays for New Year's Eve. Oh, these cost millions of dollars, by the way. Yet still no paycheck for the firefighters out on the front lines. What world are we living in?

And he answered what many people have been wondering...

Australia has bushfires every year... What makes it so different this year? He highlighted how the sheer scale of this event is unprecedented, and those previous preventative methods are now simply hopeless.

And, just to spell out the sheer severity of the bushfires...

Bodie explained how they exceed both the Amazon fires and the California fires, and how the air quality in Sydney can equal to smoking a packet of cigarettes a day.

And, the smokey air alone has forced buildings to shut...

And is setting off building fire systems.

The high temperatures are unimaginable...

So Bodie invited us to imagine a continuous temperature of 105 degrees Fahrenheit, all the way from Denver to Boston, and Seattle to New York.
It's not worth thinking about, is it?

And if you thought that last one sounded bad...

Picture an unbroken line of fire, stretching from New York to Los Angeles, then back to New York, then heading back to Los Angeles and getting at least as far as Indiana. That's in one Australian state.

You might forgive Brodie for continuously calling out Australia's Prime Minister, who continues to insist that climate change isn't a real issue.

Brodie went on to highlight the nature of Morrison's people...

None of this is okay.

Though, since the thread was posted, there were some improvements.

The federal government finally approved that firefighters who have taken days off work will now be paid $300/day for a maximum of twenty days.

And he was blown away by the positive response, so quickly added links to various GoFundMe pages and charities in which people can donate money to help the cause. If you click on the Twitter link above, you yourself can donate whatever you can.

In dark times of crisis...

It's always heartwarming to see communities from all across the globe rally together to collectively fight against devastating disasters like the Australian bushfires. Let's hope Australia will get the help and aid they need very soon.