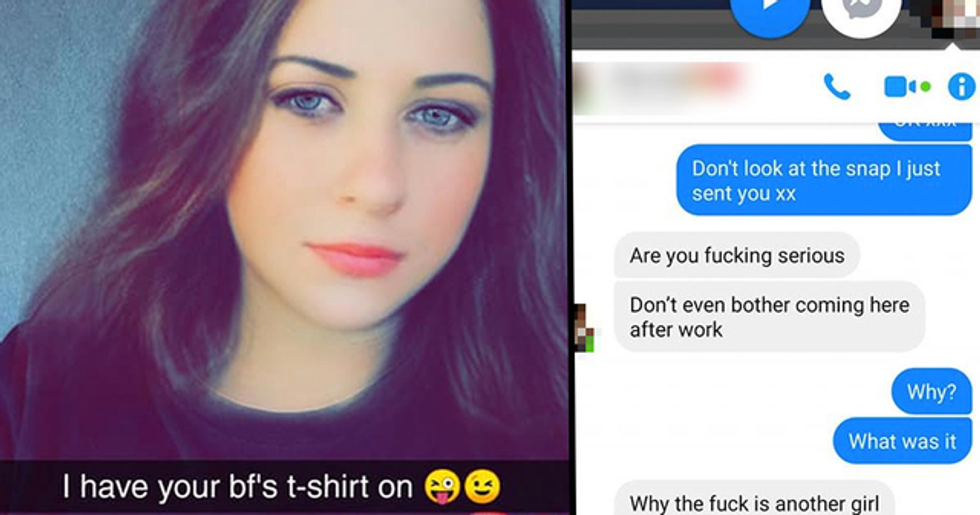 Ah, Snapchat. The innovative social media platform has long worked to the detriment of real-life relationships - which is kind of ironic when you think about it. But now, the platform has really pushed the limit, and one couple has already fallen victim to the latest feature.

Snapchat are well known for their range of filters that can make you look like you're an animal, like you're under the sea, and even like you're wearing a full face of makeup. So far, so innocuous. But their latest innovation offers another twist on the classic filter - allowing its users to swap their gender (at least, for as long as a snap lasts).

Thinking this was the ideal opportunity for some fun, one hapless boyfriend decided to send an image of his feminized face to his girlfriend. But her reaction was not what he had expected. Why not? Read on to find out.

Social media has changed the way that we all interact.

We have so many different methods of communication now that it can seem like it's actually harder to communicate than ever.

And there's one particular area wherein this rule applies.

In real-life relationships. Often, social media actually works to the detriment of a couple's communication.

Social media does have some benefits, though.

Social media can act as a near constant distraction from what's actually going on in the here and now - which, for relationships, can be a big problem.

There's one platform that is a particular culprit.

Snapchat, launched in September of 2011, is a social media app designed for sending quick (and temporary) photos to your contacts.

For many, this means one thing.

Pulling the ugliest face you can and snapping a quick photo, without anyone around you in real time noticing.

And there's another thing that Snapchat is known for.

It has a fun range of filters that can make you look totally different - and sometimes unrecognizable.

Some are so widely known that they're almost memes in their own right.

For example, the infamous licking dog face, which has become a known signifier for a girl who's feeling a little flirty.

But Snapchat has also been known to cause trouble.

For one thing, it stores the number of days in a row that you've been in contact with someone - which can cause serious relationship issues.

This has been the cause of many couple's fights.

Snapchat is clearly no real friend to relationships - and should absolutely be approached with caution.

It's natural to fight with a significant other.

But when those fights are based on a virtual space wherein nothing is objectively real, it can start to seem a little silly.

There are now more ways to fight with your partner than ever.

And when you do have a falling out, you can end up with much further-reaching consequences than you'd expect.

But one recent fight has really taken the internet by storm.

A boyfriend and girlfriend have had a huge row because of Snapchat - and for one of the silliest reasons imaginable!

It all started as a harmless prank.

But it soon became abundantly clear that the actual story was no joke - and the internet couldn't believe it.

The story stars one Ryan Hill.

The Scottish man thought that he'd use the latest Snapchat feature to trick his girlfriend, Melissa - until it massively backfired on him.

He sent her this image.

It was actually of him, with the new Snapchat gender-swapping feature. However, the picture was pretty convincing.

Worryingly so, in fact.

Melissa immediately jumped on the image, responding with righteous indignation that he would send her such a snap.

To make matters worse, he immediately doubled down on the prank.

He first texted his girlfriend asking her not to open his latest Snapchat message - which made him look super guilty.

She was having absolutely none of it.

Melissa immediately told him she didn't want to see him and was blocking his number. Harsh - but kind of fair!

It was then that Ryan realized he may have made a mistake.

His girlfriend was furious - and even as he tried to explain himself, it was clear that she wasn't going to believe him.

He did try to explain himself...

But by that point, Melissa was so angry that it didn't seem like any explanation would satisfy her.

She was determined to have a fight.

Whether he'd actually been seeing another girl, or simply trying to annoy his girlfriend, he was certainly guilty of bad behaviour on some level.

Although, we have to say, it's a little surprising.

The fact that such a convincing (and attractive) female face could be done purely through filters is pretty impressive on Snapchat's part.

And it really captured the imagination of the internet. It currently stands with over seventeen thousand reactions and over twelve thousand shares!

Many girls had the same attitude.

They thought that Melissa's reaction was absolutely fair enough, and a justified response to his antagonism.

Some had another theory.

They thought that Snapchat actually had intended this all along. One person wrote, "This shit is brutal. Whoever created that filter wants to watch the world burn."

There has been another excellent consequence of the post, though.

Some other men have been sharing their own gender-swapped faces - with slightly less convincing results!

Some are actually quite scary.

And although it shows that the filter doesn't always work so well, it also means that these guys are far less likely to spark a huge row with their girlfriends.

As for the future of this relationship?

No one seems totally sure. But we're hoping that seeing this story take over the internet has helped Melissa to at least try to see the funny side...