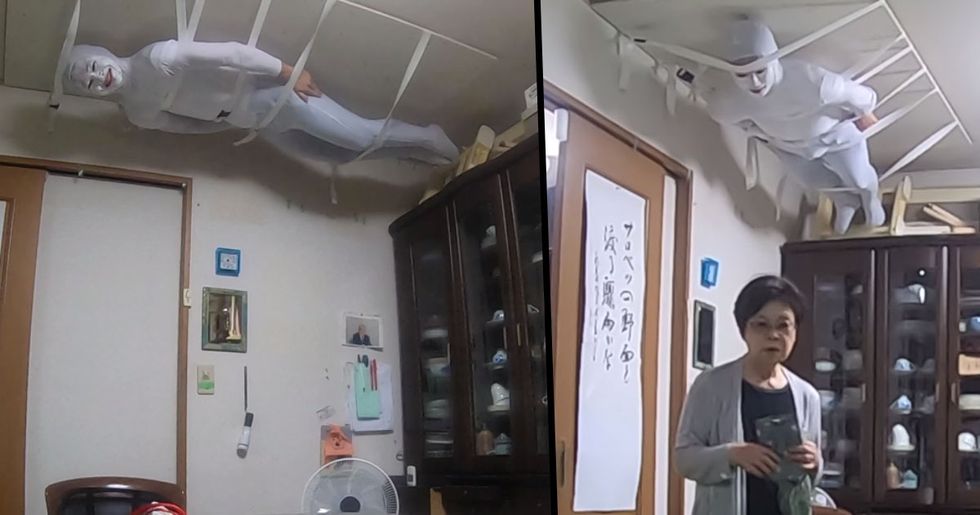 Ah, pranks. They're one of the purest forms of internet entertainment and have seemingly existed online since the very dawn of viral content. And, sure, they've had a bit of a bad rep of late, what with Jake Paul's admittedly staged "pranks" that tend to simply involve beating up his "friends," or that unfortunate Demi Lovato prank that erred a little uncomfortably on the side of sexual assault. But that shouldn't mean that we have to tarnish the good name of pranking - especially when most of it is so harmless (and, let's face it, funny).

And there's one prank that's hit the internet this week that is perfectly pure - if a little bit bizarre. Ok - a lot bizarre.

The simple pleasure of getting a laugh at the expense of a brief scare is one of the purest in the world.

But, in recent years, prank videos have been a little more problematic.

Popular YouTubers like Jake Paul have taken what was once a simple joy and turned it into something a lot more violent, frightening, and problematic.

And yet, there's something about the spirit of pranking which endures.

Maybe it's something to do with our human nature, but playing jokes on other people will always be funny - if executed correctly.

And there's been a recent resurgence in prank videos online.

Many (predominantly Japanese) YouTube stars have taken on the genre, and have created some delightfully simple, wonderfully odd videos.

Although they all have one thing in common.

The Japanese YouTube prank scene is (and we cannot stress this enough) very, very strange.

This is one of the stars of the genre.

The twenty-year-old vlogger known as Sushi Ramen Riku presents for Uuum Co., and currently has over three and a half million subscribers.

He has a range of popular online videos.

But amongst his most popular uploads are the pranks that he plays on his poor, unsuspecting, and long-suffering grandmother.

But his latest is perhaps the strangest yet.

In it, the star hangs from the ceiling of his grandmother's house, painted entirely in white, waiting to scare the living daylights out of her.

We have to say, he looks pretty horrifying.

The combination of the cheaply made, serial-killer-esque harnesses and the terrifyingly applied white makeup makes for something that nightmares are made of.

He didn't get up there alone, either.

Riku was helped by his grandfather, who really seems to support his grandson's slightly offbeat choice in career.

But did she notice the terrifying nightmare figure hanging in the corner of her home? Absolutely not.

It's clear that this wasn't going the way that Riku had expected it to.

He assumed that he'd be up there for just a few minutes, then quickly spotted by his grandma. In fact, in the video, he talks about how much strain he'd put on his neck.

After upwards of an hour, though...

Eventually, when folding laundry directly beneath her creepy-looking grandson, Riku's grandmother looks up - and directly into his deeply frightening grin.

And her reaction was pretty priceless.

She immediately lets out a bloodcurdling scream - and then proceeds to throw the two socks that she'd been folding in opposite directions.

The grandmother then runs straight out of the room.

Not quite understanding what she'd seen, she yells out questions about what, precisely, that monster lurking on her ceiling actually is.

And when she figured out that it was Riku, she was hardly reassured.

In fact, realizing that the creepy face belonged to her beloved grandson made her feel all the more uncomfortable about the prank, asking him to please go and get changed.

Many people shared some cute comments.

Particularly about how obviously close Riku is with his grandparents. At one point in the video, the pair are gathered around the computer screen, watching their grandson's YouTube channel.

Even though the grandmother was clearly visibly scared by the prank, she took it all in remarkably good spirits. We can't imagine that living with a YouTube prankster is easy.

Others laughed at how long the prank went on.

Maybe the pain suffered by Riku as his absent-minded grandma managed to not notice him for upwards of an hour was some sort of karmic retribution for making his poor grandmother scream.

Here's the full video - it's well worth a watch.

And if you're in the mood to read about more excellent online pranks, keep scrolling for the boy who managed to almost destroy his relationship with one poorly timed "joke."