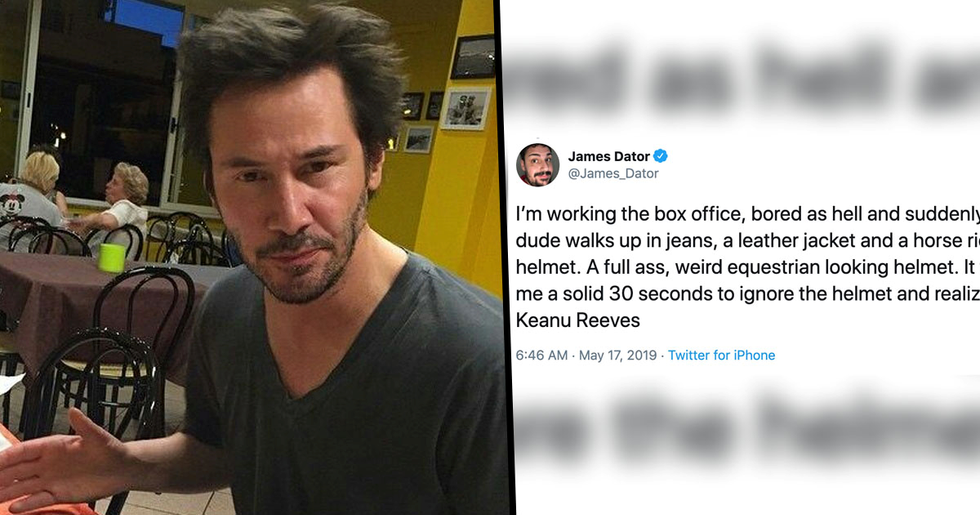 Keanu Reeves should be the poster guy for triumph over adversity. He's been through so much in his life and even though he now has hundreds of millions in the bank, he never fails to help others.

Who could forget the video showing him not only travelling on the subway, but actually getting up and offering his seat to someone else?

Not many famous faces would do that. But for Keanu, it's common courtesy and just one of the many acts of kindness he has carried out over the years.

So we weren't surprised to hear that he went above and beyond to make a sixteen-year-old boy's day by buying an ice cream that he didn't want purely for the receipt to write his autograph on.

And just wait until you read about the extravagant Christmas gifts that he bought the special effects team on the set of The Matrix...

Keanu Reeves is known for being one of the nicest Hollywood actors.

Apparently, he's down to earth, kind and, best of all, humble - a rare personality trait among Hollywood's elite.

And all this despite having a pretty challenging childhood and adolescence.

It has been reported that Keanu's father was a drug addict, that Keanu himself struggled with dyslexia and that his close friend, River Phoenix, died from a drug overdose.

And then he had further heartbreak.

Reeves' unborn baby with girlfriend, Jennifer Syme, was stillborn and Jennifer tragically died in a car crash not long after. You'd expect a lesser man to go off the rails after such grief and tragedy, but not Keanu.

He is, and it seems that he will always be, a genuine guy who wants to make others around him happy.

Even early in his career, he was always remembered to be nice to those working alongside him. For example, he bought breakfast and lunch for the stage workers on the set of the movie, Chain Reaction.

And even though he is worth an estimated $360 million, he is still keen to prove that he's just a regular guy.

He regularly rides the subway in New York rather than using a driver. And he has even been known to offer his seat to others! What a gent.

But when he is driving himself, he still manages to go the extra mile.

Like the time he helped a lady whose car had broken down on a highway in LA. Not only did he call the AAA for her as her cell phone was not working, but he also drove her fifty miles home after her car had been towed in the opposite direction to where he was going. Now there's helpful, and then there's Keanu-helpful!

He is also big on helping charitable causes.

In particular, cancer charities as his sister was diagnosed with leukemia in the '90s.

Even though she has been in remission since 1999, he still helps them.

He donated 70% of his Matrix earnings to cancer research and he opened a foundation in his sister's name.

He also supports the homeless.

Way back in 1997, Keanu was photographed hanging out with a homeless man on the streets of Hollywood. He shared some food with him and genuinely listened to stories about his life and how he had ended up homeless.

And he's not all about the money.

Acting is his passion and he has taken more than one pay cut to ensure that he can act alongside the best in the profession. When he was cast in the film The Replacements, he took a massive 90% pay cut so that Gene Hackman would also agree to star in the film. And apparently, he was not above a bit of backgammon as well.

And he did the same thing for The Devil's Advocate.

Agreeing to a whopping $2 million pay cut so that the film could afford to cast Al Pacino. Now that's a lot of moolah!

Even more selflessly, he signed away his back-end deal on the second and third Matrix movies.

So that the makeup and special effects team could remain in employment for the duration of the trilogy. Ahh, they must have loved him!

It was even revealed that he gave one of the set builders on The Matrix $20,000 as a Christmas bonus.

Apparently, the builder in question was struggling financially and couldn't provide for his family and as soon as Keanu heard about his troubles, he wrote him a cheque. Simple as that.

And his generosity whilst filming The Matrix didn't end there.

He also bought Harley Davidsons for his friends on the special effects team as Christmas presents! Clearly, we need to get better friends!

And to top it off he has a great sense of humor and doesn't take himself too seriously.

When rumors began to circulate that he was gay and that he had secretly married David Geffen, rather than get all bad-tempered, issuing a quick and adamant denial, Kenau took a different approach. Saying: "For a while, people were saying that David Geffen and I had gotten married. That just blew me away. Not because they thought I was gay but that they thought I could land a guy that hot." What a perfect response!

He wasn't even offended when people took the p*ss out of his LA drawl and his pretty boy looks.

Saying: "I'm a meathead, I can't help it, man. You've got smart people and you've got dumb people. You just happen to be spending time with a dumb person." We'd rather a kind, dumb person that a horrible, intelligent one any day Keanu!

We also love that he doesn't think he's above everyone else.

Like so many other big stars. In fact, he even waited in the rain for one of his own parties due to a mix up as he didn't want to cause a scene by walking to the front of the line and complaining to the bouncer. We literally can't imagine any other actor doing this. Hell, we can't even imagine us doing this!

And most recently, a fan has revealed a very sweet story about himself and Keanu in honor of his new film John Wick: Chapter 3.

James Dator was a mere sixteen years old when he first met Keanu back in 2001.

At the time, Dator was working at a movie theater in Sydney, Australia.

When who happened to walk in but Keanu Reeves himself.

Now even though Keanu was at the height of fame in 2001, starring in The Matrix...

Dator did not recognize him at first as he was distracted by the distinctly unusual equestrian style helmet that Keanu was wearing.

But what was Keanu doing in a movie theater in Sydney?

He had come in to see the movie From Hell starring Johnny Depp as a detective looking into the Jack the Ripper murders. What more could you need to hear to convince you how down to earth Keanu is? He could definitely afford to build his own private movie theater!

Obviously, Dator soon realized who was in front of him and he started to feel more than a little star struck.

But seeing as he was in the presence of Neo from The Matrix, understandably, he wanted to play it a bit cool. So instead of directly asking Keanu for an autograph, which we are sure he would have given him graciously and willingly, he decided to offer him his employee discount which involved him having to sign a form. Clever, right?

But never one to take advantage of a freebie...

Keanu said: "I don't work here." So, poor Dator had to charge him full price meaning he didn't get his autograph!

But unbeknown to him, Keanu had sussed out his not-so-cunning plan.

And mere minutes later, Dator heard a knock on the door. Who was it? Keanu of course!

With a special offering for the shy sixteen-year-old.

It was a receipt from one of the concession stalls with his autograph signed on the back. He said: "I realized you probably wanted my autograph, so I signed this." And, even better, on the way back to the theater, Dator saw him casually throw an ice cream into a nearby bin.

And the realization hit.

I realize later that he bought an ice cream cone he didn’t want, just to get receipt paper so he could scribble his… https://t.co/O35EgOBseh
— James Dator (@James Dator)1558101092.0

Keanu had bought an ice cream just so he would be able to give him an autograph. We are speechless! What a legend.

Because who doesn't like to hear a heartwarming story about their favorite actor? With over 52,000 likes and counting!

And loads of fans have shared their own past encounters with the actor.

Ahh, this one is so sweet. We can just imagine Keanu taking the time from his busy schedule to talk to an eight-year-old fan.

Keanu let this dude take two selfies because his hand was shaking so badly.

Clearly, patience is another attribute of Keanu's. We'd bet good money that he doesn't have any faults at all!

And it seems that nothing has changed.

Keanu is still happy to stop and chat and pose with his fans. Plus, he's still looking pretty damn fine! Don't you agree?