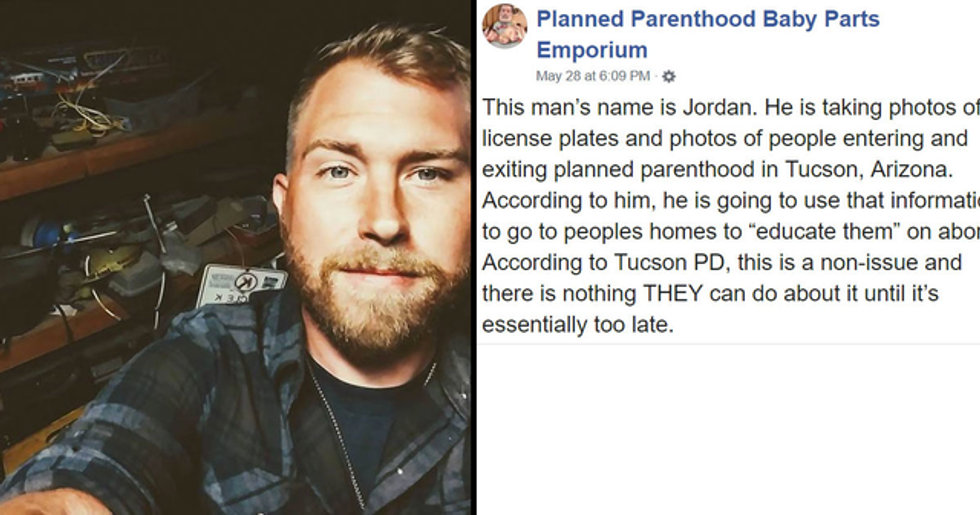 A man claiming to be "pro-life" has recently blown-up on social media for his threatening behavior towards those visiting a Planned Parenthood in Tucson, Arizona. The vigilant pro-life supporter, who has been named as Jordan Hart, has come under fire for his creepy and threatening behavior in the name of abortion prevention. Hart had planned to photograph the license plates of those using the clinic's services, in the hope of tracking them down at home to talk them out of birth control and abortion.

But don't lose your faith in humanity just yet. In spite of this horrendous display of hypocrisy and misogyny, many on the internet have banded together in an attempt to take down this awful character. We've rounded up the best of the responses to Hart's terrifying scheme, from the ingenious to the flat-out hilarious.

Planned Parenthood Federation of America is a nonprofit founded in 1916.

It's dedicated to providing sexual health care for those in need across the United States - certainly a noble cause.

It provides help for many who are most in need.

For those suffering an emergency in terms of birth control or sexual healthcare, often, Planned Parenthood provides a much-needed place to turn to.

Many who hold more conservative views on sex, marriage, and reproduction, don't think that such a service is necessary - and, in fact, find it representative of something quite evil.

It's an undeniably necessary service.

For those with lower incomes, preventing unwanted pregnancy can be the best way to advance career prospects and ensure that any children they do have can grow up happily and healthily.

Which does mean one thing...

One (of the many) services provided by Planned Parenthood is abortion - a procedure that will terminate an unwanted or a dangerous pregnancy.

But (of course) some people take issue with women having this sort of autonomy over their bodies.

There are a number of people (mostly male) who don't support a woman's right to choose - and for them, Planned Parenthood has become something of a symbol of the opposition.

And one man has made attacking Planned Parenthood a personal mission.

This is Jordan Hart, a man from Tuscon, Arizona, who has taken a rather extreme stance on the Planned Parenthood in his home town.

And Hart is happy to fight what he sees as his enemy by any means necessary.

But it's his rather extreme form of protest which has captured the attention of the internet this week.

He has taken to frequenting the Planned Parenthood car park.

And when there, Hart photographs the license plates of the cars there. His idea? To track down who these cars belong to and to visit their own homes.

And his big plan?

Not only is this a pretty ill-thought-through plan.

But it's also incredibly frightening behavior. Can you imagine opening your front door to a man ranting and raving about the dangers of abortion? It's a particularly horrifying concept for those who live alone.

When you read the comment that first attracted attention to Hart, you start to see how dangerous the man really is. It also caused the internet to wonder exactly how "pro-life" Hart actually is.

There's one word for it.

The passion that this man feels to make life just that extra bit harder on women really speaks volumes about his character.

Hart proceeded to get even more attention.

But probably not of the kind that he was looking for. Planned Parenthood shared the details of this predator on their Facebook page.

The reason they shared wasn't to congratulate him on a job well done, though.

It was to warn men and women using Planned Parenthood that they should be extra vigilant and to keep themselves safe against this clear threat.

But it's the responses to this post that will restore your faith in humanity.

People from all walks of life have banded together to stand up for women everywhere by taking down this ridiculous (and frightening) "pro-lifer."

Many took this balanced view.

Whether or not you agree with abortion, there's really no excuse for following women home and making them feel threatened.

But there was also this valuable point.

While Planned Parenthood as an institution does offer abortion-related services, that's far from the only service they provide.

In fact, for many, Planned Parenthood has quite a different use.

It can provide serious help for those in need of healthcare - particularly in a system that ends up neglecting so many.

But others offered this hilarious solution.

Since it seems like Hart has so fundamentally misunderstood what Planned Parenthoods are used for, maybe it would be a good idea for women to turn the tables and offer some "education" to him.

Others had this question.

How exactly is Hart using the license plate information to find out people's addresses? Many were concerned this was actually illegal - and hoped that Hart would face consequences.

Some wanted to turn the tables.

Many suggested that, since Hart was clearly so fine with turning up at peoples' homes unannounced, he surely wouldn't have a problem with others doing the same to him.

Others suggested a sting operation.

What if people who were keen on meeting Hart (and giving him a piece of their mind) started frequenting the Planned Parenthood parking lot?

Or perhaps this simpler solution would be a better one.

Maybe more people should just start using the parking lot as a rule, to keep Hart overly busy with his ridiculous mission.

But then one person pointed this out.

It's only attracted positive attention to the Planned Parenthood in Tuscon - and much of this has come in the form of donations.

One commenter left this savage burn.

A woman who had previously dated Hart shaded both his character and his manhood in one fell swoop. Nice work.

And if you're worried about the safety of women in Tuscon...

The information on Hart has already been shared with authorities - so hopefully it won't be too long until he faces some form of consequence.

And let's allow this woman to have the mic drop.

Let's hope that the collective action of everyone on the Facebook page can help to make an actual, real-life difference to those in need.

Hopefully, we'll see more of this group action in the future.

When people stick together, they can really work well to tackle dangerous and extremist views.