Guy Thought He Was Reading 'Harry Potter' For the First Time, But He Was HILARIOUSLY Mistaken | 22 Words 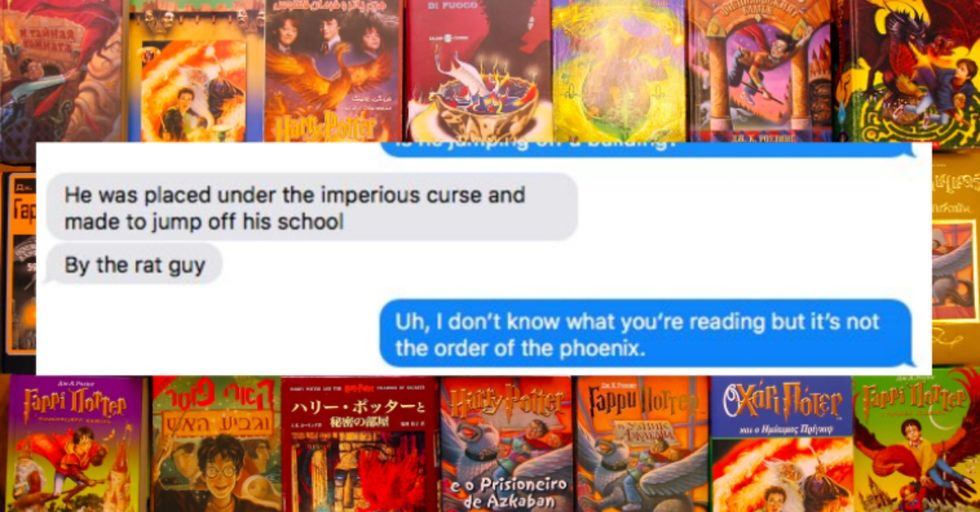 Guy Thought He Was Reading 'Harry Potter' For the First Time, But He Was HILARIOUSLY Mistaken

Do you remember Harry Potter? Those little novels about the bespectacled boy wizard who fought that big scary snake man monster? Broomsticks? Wands? Spells? Chocolate frogs? Heard of those books?

Of course you have. Everyone has. Harry Potter was a staple of all our childhoods and admittedly many of our adulthoods.

Well, Shelley Zhang's friend somehow missed the boat. He recently decided to join society and read the Harry Potter series for the first time. Or so he thought. He was actually unknowingly reading some pretty ridiculous HP fanfiction instead. Honestly, at this point, if you haven't read Harry Potter, you deserve to get fooled by fanfic.

Hop aboard the Hogwarts Express because this guy's texts with Shelley are chock full of funny.

"He suddenly realizes he's read a fanfiction Order of the Phoenix instead of the real one." Oh, this is going to be golden. Like snitch level golden.

He actually thinks Shelley is trolling him at first. Little does he know he's reading some of the most bizarre HP fanfic out there.

"Uh, I don't know what you're reading but it's not the order of the phoenix" is not what you want to hear when you've just finished a 500+ page book about teenage wizards.

This guy fell victim to one very sly troll.

It seems like every book in the series he read was real except for the fifth one. And the fifth one, as we'll come to find out, was as fake as Donald Trump's spray tan.

Yes, Harry Potter got "more mature and dark as it went on," but it never crossed the line into straight up wizard sex.

Somehow, some way, a fake rape scene is not the strangest part of the fake Order of the Phoenix. It only gets crazier from here.

"No, Ginny and Draco are not a thing."

It might seem insane for a troll to go through all the effort of embedding a fake book into the entire Harry Potter series, but to that troll, I'd like to say, "Thank you." This string of texts makes it all worth it.

The details of the fanfic are meticulous.

You can almost see how someone that far into the series would fall for it. Almost.

The ridiculousness just keeps piling up.

Fake rape? Hermione in a bikini? It's becoming less and less OK that this guy accepted these details as true parts of the story.

He doesn't get much love in the fanfic version of HP numero cinco. And sorry to burst any bubbles, but the Harry Potter world as we know it is strikingly void of sex. Eventually (spoiler alert) Harry and Ginny and Ron and Hermione have kids, so we assume they did it, but we're not afforded any of the magical details.

Just to be clear, there's no necrophilia in HP either.

"Well now you know why I thought it was weird!" Weird? Slightly off?! That might be the understatement of the millennium.

Did you want a copy and pasted passage from the fanfic?

Because here's a copy and pasted passage from the fanfic. And oh boy. We're with Shelley. We cannot quite believe this guy fell for it.

As Shelley said before, there's no intercourse in the real Harry Potter.

Not even stuff that's "implied, strongly." Do have to admit that the sex ed stuff is kind of great, though. Wish that was real.

Neville's parents were actually tortured into insanity in the real book.

And this guy was tortured into insanity by the fanfic. There is, however, no addiction to potion, bestiality, or super ripped Harry.

Cassandra the snake, "Sandy for short," is probably the greatest added detail to the story. Sure, the author added a whole bunch of crazy sex, but they also gave Harry a pet snake! How sweet!

If this guy couldn't tell the story was fake until now, you'd think he'd at least get clued in when Harry transformed into a flying lion and gets ridden by Hermione. But nope.

This Aunt Petunia backstory is actually kind of intriguing.

Though that doesn't make it any less of a total lie. It's still a complete fabrication.

This alternative timeline is definitely entertaining.

How is this guy going to go back and read the real Order of the Phoenix now that he has this insane narrative in his head? This is truly a unique Harry Potter reading experience...

There is quite a lot of HP fanfic out there, so I suppose it's slightly understandable that this guy got fooled.

I would hope that if he came across this supposed "Dapple" fanfic, though, he'd know it was fake.

"You are a monster."

After all that, Shelley makes her friend believe, momentarily, that the Goblet of Fire he knows wasn't correct either. She shows no mercy.

And the cherry on top...

...an in-depth analysis of Shakespeare! It makes sense if you think about it. Harry's a wizard of magic, Shakespeare's a wizard of words. Is this the most ludicrous text thread in all of history? It might be. We'd like to thank Shelley for sharing, her friend for falling for fanfic, and the creative author who made it all happen.