Guy Thought He Was Taking Photos With Keanu Reeves, Turns out He Definitely Wasn't | 22 Words 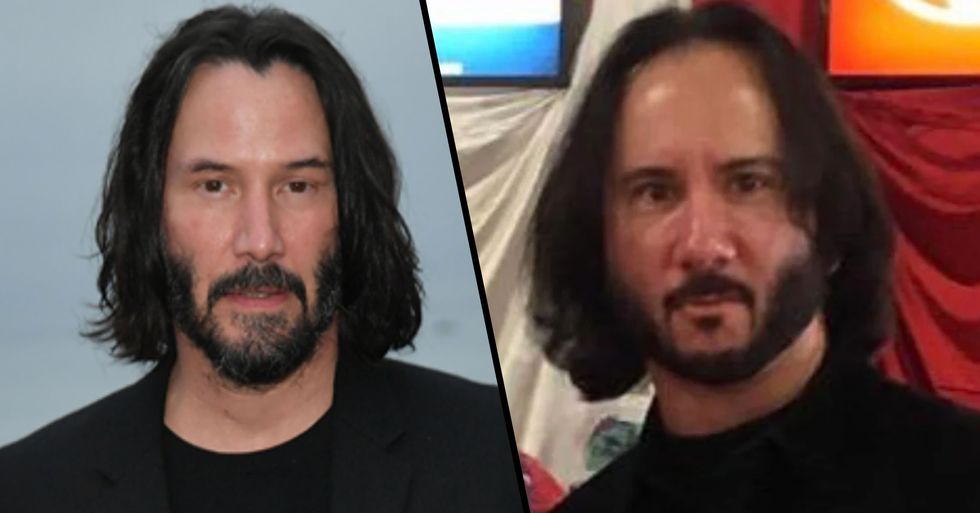 Guy Thought He Was Taking Photos With Keanu Reeves, Turns out He Definitely Wasn't

If there's one thing that the internet can agree on, it's that Keanu Reeves is an all-around great guy.

From his roles in some of our favorite action thrillers to his more dramatic roles in films like Dracula, he's a multi-talented actor... but that's not why the internet loves him so much.

He's also known for being one of the nicest (and least problematic) celebrities on the planet.

Fans all around the world are eager to meet him and get a candid photograph, but one fan made the biggest mistake recently.

He first rose to fame in a pretty unlikely franchise...

Bill & Ted's Excellent Adventure (1989) told the story of 2 slackers traveling through time. It was so successful, in fact, that it was followed by a sequel: Bill & Ted's Bogus Journey in 1991.

But Keanu has never stuck to just one genre...

Keanu is perhaps primarily known for his roles in action movies...

But there's no doubt where Keanu gained most of his fame...

His role as Neo in The Matrix franchise is what really made him into a household name, and the movies are still thought of as touchstones within the science-fiction genre to this very day.

But aside from his professional achievements, Keanu hasn't had such an easy life...

And it's safe to say that he's faced a life that one wouldn't wish on their worst enemy.

He encountered grief at a very young age...

Keanu looks back on that time in pain...

The pair fell in love and were expecting a baby together...

The pair were left devastated.

Keanu was completely broken by grief...

But the actor didn't let this tragedy make him bitter...

It was recently revealed that Keanu gave all his profits from the sequel from The Matrix to the crew, and he didn't even want credit for it, saying, "I’d rather people didn’t know that. It was a private transaction. It was something I could afford to do, a worthwhile thing to do."

Keanu also settled with a temporary hotel lifestyle for quite some time...

Keanu is now in a happy relationship with his long-term girlfriend...

And if Keanu is happy... we're happy.

Keanu is very popular with his fans...

Because let's face it, what's not to love?

He's posed for many photographs with his fans...

But one man has recently gotten things very wrong.

A motorcycle show was held in Maryland over the weekend...

Active Donald Trump supporter Bill Montanary believed he had run into Keanu and, of course, he asked for a picture.

And people were instantly baffled at the Keanu stood beside him.

Now that isn't the Keanu we all know and love...

It turns out that this man is called Nick German, and when he posed for the photographs, he didn't at all realize that he had been mistaken for Keanu.

Nick decided to straighten things out...

"Ok - this is insane. Some jerk took my photo last weekend at the Timonium Bike Show and now posting on Instagram that he met Keanu Reeves," he wrote. "Jesus. Really people???? Yes, that is ME on the right. What is wrong with people? And it received IG 250,000 hits. Smh."

It's an easy mistake to make...

But we are safe in saying that we know Keanu when we see him!