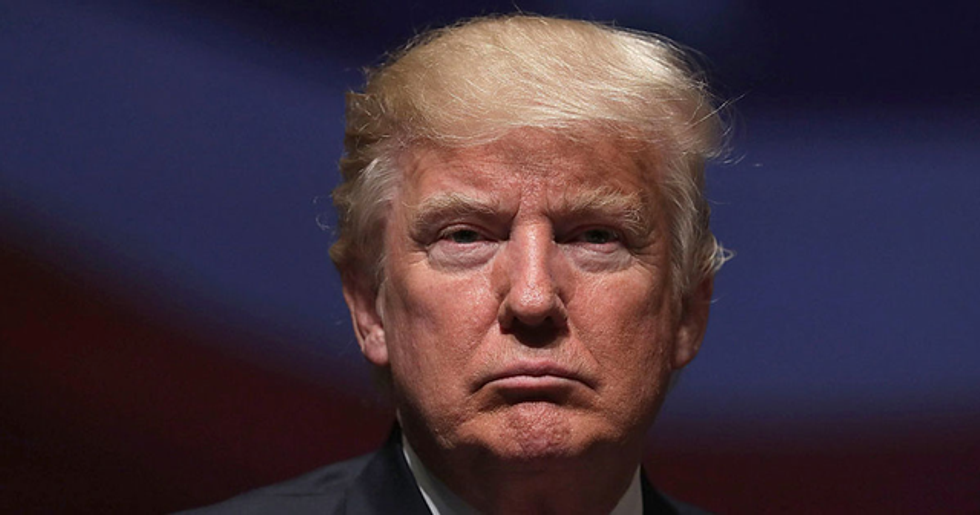 If there's one thing this generation will be remembered for, it'll surely be the selfie. In spite of painted self-portraits dating back thousands of years, it's only in the past ten that snapping pics of your own face has truly become an art form. Some people have built whole careers off of it!

One particular subset of the genre is the celebrity selfie. Often, these are taken during a serendipitous encounter with a star - usually the celeb looks poised and fabulous, while the civilian looks a little dazed and out of sorts. Like they'd just seen a ghost - or, in this case, someone they recognize off the TV.

But a failed celebrity selfie - well, that's a whole different ball game. And on Reddit, a user a shared a truly amazing failed selfie with one of the most famous men in the world. His candid with Donald Trump has got the internet talking - and once you see it you'll know why.

Selfies are really having a moment.

From the second smartphones introduced a front-facing camera, it seems the whole world went crazy for taking snaps of the most interesting subject of all - themselves.

Although some selfies are better than others.

One of the most famous ones of all time is the iconic celebrity selfie from the 2014 Oscars, which works almost as a who's who of actors from that year.

Snapping a pic with a famous face is usually a sure fire way to get your picture noticed.

And a popular target is arguable the most famous man in the world right now, Donald Trump. But getting a pic with the president can be easier said than done - this example is actually a wax figure rather than the real deal!

Many have had to settle for a pale imitation.

These selfies, from the 2018 "Impeachment Parade" in New York City, see the President replaced by a blow up doll of a crying orange baby.

Other popular options include selfies with painting of Trump.

This controversial artwork is emblazoned on a wall separating Bethlehem from Jerusalem, and shows Trump kissing Benjamin Netanyahu, the Israeli Prime Minister.

In fact, a genuine selfie with Trump can be a difficult thing to get.

This flyer, shared on Twitter, advertises a public appearance by POTUS. Read the small print, though - the rally plus photo opportunity comes with a hefty price tag. $15,000, to be exact.

The 2018 FCS Division I Football National Champions were honored with an invitation to the White House, to meet Trump and receive congratulations on their victory.

This type of intimate gathering would be a great photo opportunity.

Or so you'd think. Because one football player snapped a selfie with the President, which got everyone talking. He shared the hilarious image on Reddit.

And people had some serious questions.

The first one was a simple query of logistics. The way the image was taken seems almost impossible, and would seemingly require a super-human arm length to take. Others point out that as the photographer is also a champion football player, it's likely he has pretty good reach.

Some were shocked the picture got taken at all.

The shock value of the pic is aided by how unexpected it seems for the President. But Redditors couldn't imagine it was very smart to whip out a phone and hold it up to the President, just in case it had been taken as something else.

Some Redditors had serious questions.

Because the OP had had first hand experience with a guy few of us would ever meet, people wanted to know as much as possible about the experience - from a distinctly multi-sensory perspective. (FYI, the general consensus seems to be Axe body spray.)

The selfie looks like it was taken by the OP without first asking the President if that was OK - but some commenters pointed out that Trump is allegedly no stranger to this type of situation.

Some pointed out the OP had a celebrity likeness.

Many though he resembled "actor" and disaster artist, Tommy Wiseau. Others made comparisons to Tarzan, Milli Vanilla and Weird Al Yankovic.

Some thought there was a reason Trump didn't want to take the pic.

Trump's hair has been a near-unending source of comedy, thanks to his signature, divisive, bouffant style. The other hair in this selfie is much more majestic.

The story actually made the news.

On the far left of this live-stream video of Trump's speech, you can actually see the Reddit poster waiting for his opportunity to strike. You can also see a table to the foreground absolutely groaning with fast food. Strangely, this isn't the first time Trump has catered an event with burgers and fries.

Here's the picture that everyone's talking about.

In the background, you can see the photographer serving some serious face. In the foreground, Trump, looking disgruntled, surprised, and less than graceful.

It's a brilliant image.

It's such a twist on the classic celebrity selfie, because it's the the President who looks super flummoxed in contrast to the photographers relaxed, smiling demeanour.

It's clear the even meant a lot to the poster, identified as Greg Menard.

Even though the selfie was pretty funny, it does seem he took the honor quite seriously, even making a YouTube video to immortalize his experience. It'll definitely be something to look back on in the future!

And you'll all be relieved to know there were more pictures from the event.

Menard shared a less amusing image of himself and Trump on his Twitter account. This time it looks like both parties were prepared to be photographed.

We're unsure if Trump has seen the viral selfie.

But people on Reddit were quick to imagine his reaction if he had. In the face of such an obvious fail, it's still hard to think that the President would admit he wasn't looking his best.