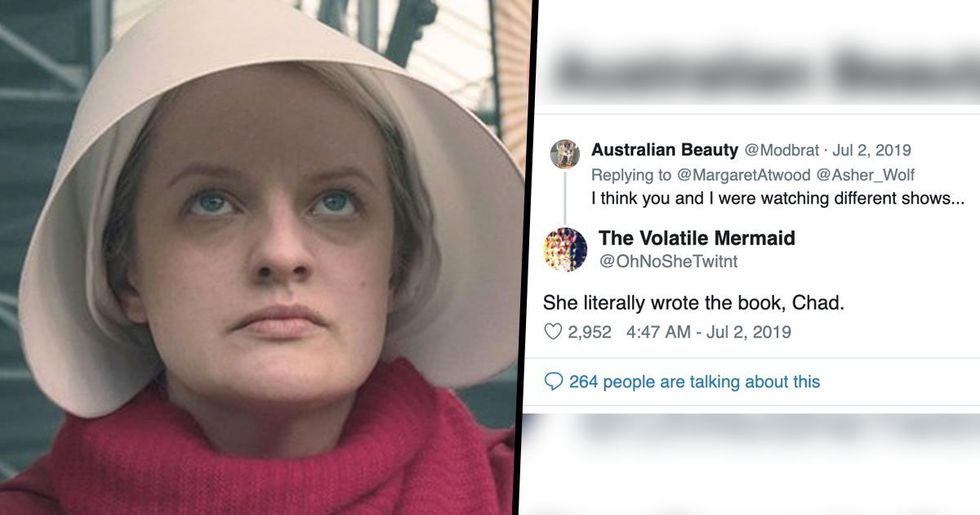 Guy Tries To Mansplain 'The Handmaid's Tale' to Author, Gets Owned

Every now again, the internet is blessed with a foolhardy gent who feels as though it's his place to impart his wisdom, correct someone (wrongly), or explain a situation that no-one asked him to explain.

Not only is this really annoying for anyone on the other end of this, but, most of the time, this Mansplaining Michael is talking out of his derriere.

One hundred and ten percent (and before some guy tries to tell me that that is an impossible percentage, I know) of the time, whoever this Mansplaining Micky is, he most certainly doesn't have a clue what he's going on about.

Today was one of those days.

Ever heard of Margaret Atwood?

via: Photo by Terry Jorden

Of course, you have. Who hasn't? Margaret Atwood is one of the most celebrated novelists of the 21st Century. She's written numerous best-selling titles and perhaps her best-known work is the modern classic, The Handmaid's Tale.

What's The Handmaid's Tale about again?

Didn't you study it as a freshman like every other kid around the world? Well, that was probably a while back, so let me jog your memory... The Handmaid's Tale is a novel set in a dystopian America, wherein a totalitarian state called "The Gilead" has complete control. The religious oppressive regime organized by the Gilead Republic sees that women are stripped of their agency and identity to the point that they are forced to have sexual relations and carry the children of their male masters. It has since been adapted into a popular TV show.

The Handmaid's Tale is rich with allegories alluding to our own society.

The symbolism and allegoric references that Atwood fills the pages of The Handmaid's Tale with are probably why this book is such a popular choice with high schools around the world. Atwood wasn't messing about when she wrote The Handmaid's Tale; she really did want to warn people about how society could end up.

Atwood published the novel in 1985.

The author made no secret of the fact that the novel intended to offer a satirical view of a multitude of the social, political, and religious trends of the 1980s.

She holds strong beliefs about the precarious nature of civilized society

In an article that Atwood wrote for The New York Times regarding her initial process in writing the novel, she states: "Having been born in 1939 and come to consciousness during World War II, I knew that established orders could vanish overnight. Change could also be as fast as lightning. 'It can’t happen here' could not be depended on: Anything could happen anywhere, given the circumstances."

Despite popular belief, Atwood didn't make anything up in Handmaid's.

On the subject of where Atwood sourced the material she explained: "One of my rules was that I would not put any events into the book that had not already happened in what James Joyce called the 'nightmare' of history, nor any technology not already available. No imaginary gizmos, no imaginary laws, no imaginary atrocities. God is in the details, they say. So is the Devil."

Atwood sourced historical events as the structural backbone for the novel.

Explaining this further, Atwood said: "The Republic of Gilead is built on a foundation of the 17th-century Puritan roots that have always lain beneath the modern-day America we thought we knew." So as far as Atwood is concerned, the events that occurred in her novel were already taking shape in America.

Atwood describes Handmaid's as an "Antiprediction."

Atwood considers that it is impossible to predict the future and that she wasn't attempting to look into a glass ball when writing Handmaid's. What she does concede to is that the novel expresses anxieties that Atwood felt about the future of society and that, in some way, by writing the novel and exposing the complete absurdity of the regime, she had hoped to prevent her anxieties coming to fruition. She states: "It’s an antiprediction: If this future can be described in detail, maybe it won’t happen. But such wishful thinking cannot be depended on either."

One of the main plotlines in the novel revolves around the forced pregnancies of women under the regime.

The recent anti-abortion laws that have swept America in recent years have reminded many people of Atwood's 1985 modern classic.

Atwood took to Twitter on July 2nd to share an article comparing the situation in Alabama and the dystopian novel.

She shared The Guardian article, titled "The Handmaid’s Tale comes to life in Alabama. Women must heed the warning." The article expresses disdain over the recent ban on abortions in Alabama that could see women face prison, not only for having an abortion but also, "for being addicted to heroin, for drinking during pregnancy, and even for drinking before she knew she was pregnant" under Alabama’s 2006 “chemical endangerment."

The article is raising a point about the policing of pregnant female bodies.

And, what happens in The Handmaid's Tale, again? Uh, let me think... oh yeah, women lose the rights to their bodies and are forced to have pregnancies that they have no choice in...

So tell me, White Man on Twitter, what's your opinion?

Not only did this guy feel as though his opinion needed to be heard, his opinion was also real dumb. @Modrat replied to Atwood saying: "I think you and I were watching different shows..."

If @modrat didn't know what mansplaining was before...

He surely has an idea now...

The audacity! (or stupidity, you decide for yourself...)

The mansplainer got more recognition than he could ever have dreamed of.

Sadly for him, it wasn't the kind that he was looking for.

In his defense, he did apologize for his mistake...

Not sure whether he genuinely thought that he had made this lady's day...

Or whether he understands why she enjoyed his tweet (certainly not because she agreed with him).

And the meat clown of the week goes to...