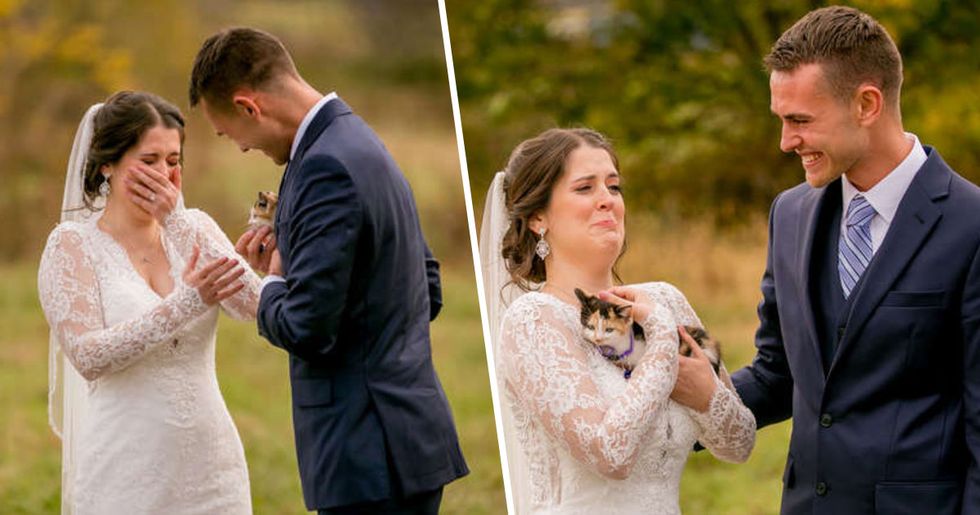 We all love a good wedding photoshoot, right?

This one is particularly special because it comes with a really cute story.

Kaylee and Orion had been together for over 5 years before they tied the knot. As much as this pair are well and truly in love, they don't agree on everything.

One thing that always divided this couple was Orion's distaste for pets. The groom had point-blank said he never wanted to get a pet, and Kaylee had resigned to the fact.

On getting married, Kaylee was sad to be leaving her family home, because she would miss the family cat, Nala.

As this photoshoot series adorably proves, Kaylee had absolutely nothing to feel sad about...

They tied the knot after 5 and a half years together.

In a sweet Facebook post about getting hitched, Orion wrote: "I married my best friend Saturday afternoon. After 5 and a half years of dating and being engaged, I’m so blessed to call her my wife!"

Orion decided to surprise Kaylee on the big day.

With the assistance of their wedding photographer, Megan O'Dell from Wild and Wonderful Photograph, Orion was able to capture the magical moment.

An adorable kitten, that he kept completely secret from her until the big day.

Kaylee had no idea what was going on.

She was told by the photographer that they were doing their "first look" photos.

Orion tapped his new bride on the shoulder for her to see the kitten for the first time.

Kaylee's surprise was written all over her face.

Kaylee was awash with emotion.

Describing the moment, Kaylee told Dodo, "I think the first thing I said was, ‘Shut up!’ — I was totally shocked and couldn’t believe he had a kitten with him."

The adorable ginger and black speckled kitten popped out its head to meet its new mommy.

The gesture was significant to Kaylee...

Orion hadn't just given her a kitten, he had proven that he was willing to sacrifice his wants and needs for what she wants.

Reflecting on how she felt in the moment, Kaylee said, "I got emotional when it processed that this was our kitten to keep!"

"Did you know about this?"

Kaylee flashes a smile at the photographer, realizing that she too had been in on Orion's sweet plan.

I think after Orion's surprise, Kaylee was certain she'd made the right choice in marrying this guy.

Orion couldn't help but shed a few tears during the heartfelt surprise.

They decided to call her Chloe.

Chloe the cat sure is lucky to have been rescued into such a loving family.

In this snap, I think it might have dawned on Orion how much of a responsibility having a new kitten is... "Has it just peed on me?"

But it's all worth it.

Anything for the missus, right? Continue scrolling for another pet-related wedding shoot. This one involves an adorable dog that can't take the photoshoot seriously. I mean, what do you expect? He is a dog after all! Prepare for some unbelievably cute pics.