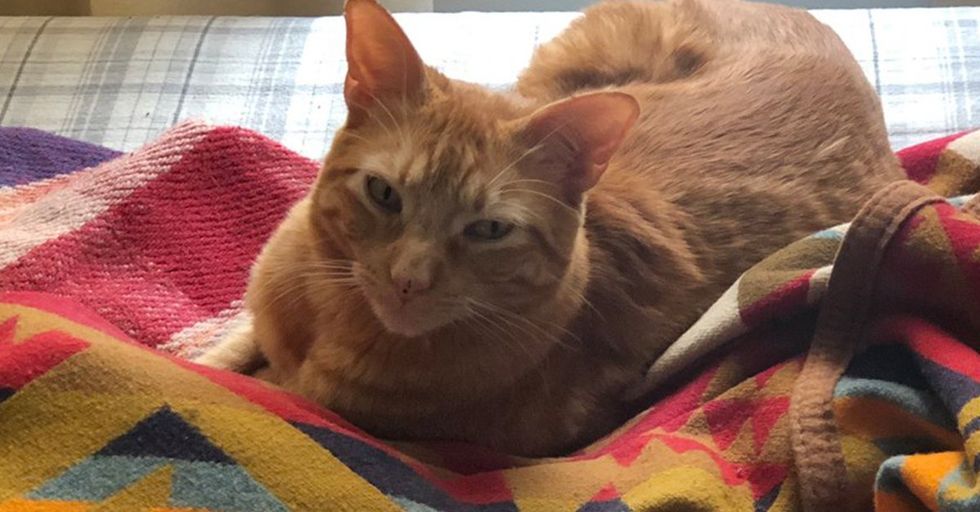 I don't know about you, but I always love reading a good Twitter thread. There's something so satisfying about scrolling through and watching a story develop over the course of several tweets.

And friends, I may have found my favorite Twitter thread yet. It involves a person completely minding his own business and then being interrupted by a trio of animals who clearly have other ideas of how the evening is going to go. I am so ready for this Twitter thread to become a children's book or Saturday morning cartoon.

The thread comes to us from Twitter user @jpbrammer, managing editor for The Trevor Project. Get ready to read it and smile...and then laugh out loud...and then just be happy for the rest of the day because you got the chance to read something truly delightful.

JP Brammer was just sitting at home and minding his own business when he was surprised by a knock at the door.

It wasn't a lost delivery person. It wasn't someone asking for signatures on a petition or selling cookies. It was two dogs and a cat.

You can see the animals in this video:

It was a black and white dog, a German shepherd pup, and an orange cat. Best buds, I'm assuming. Brammer had no idea what they were doing there, though.

Watch this next video closely:

Look in the bottom left-hand corner and you'll see that the cat slipped into Brammer's apartment without him realizing it!

Brammer had to admit the cat was very cute...

...Even if it had made him look a bit foolish on Twitter. Totally worth it, if you ask me.

Brammer soon realized that the trio had escaped from an apartment upstairs.

He got the dogs back into their home without too much trouble, but was left with the wily feline.

It didn't take long for the cat to make itself comfortable.

In case you're wondering, this is how most people wind up with a cat. Once a cat has decided to adopt you, you're kinda stuck with them forever. Anyway, the dogs were safely tucked away in their home, right?

Somehow, the dogs escaped from their own home once again and came straight back to Brammer's door.

Brammer decided to just hang out with the pups until someone came to help.

Which is clearly the smartest option. Plus, you get to hang out with dogs! What's not to love?

You can see the masterminds in action here:

Not only can they open closed doors; they can open doors that open inward. How?! How is this possible? How do these dogs' actual owners keep them anywhere ever?

First of all, props to Brammer for recognizing that the cat is the leader of the group. Secondly, there's no way that cat is going to help you.

He and the cat clearly started bonding. Say it with me now: Awwwwww!

After securing the dogs behind (another) door, Brammer focused his attention on the cat once again.

And then this happened:

Yep. The dogs got out. Again.

Brammer started to become a little frazzled at this point:

And honestly, I can't blame him. This was a lot of responsibility thrust upon him simply by the fact that the dogs and cat chose him for it.

And the black and white dog somehow managed this:

On the one hand, he was at least secured. On the other hand: how?!

Finally, another human appeared in the building.

I can only imagine the relief Brammer must have been feeling at the sight of another member of the human race.

Can we just talk for a second about that puppy's ears? So floppy. So huge. So cute. I wish this whole thing had happened to me. Kind of.

Brammer was clearly concerned about being able to provide for the animals while they were away from home.

Isn't that so sweet? Of course, all you have to do to keep a cat happy is exist when and where it wants you to and feed it.

Soon, all the critters were asleep.

See what I mean about this becoming a children's book? The story just gets cuter and cuter. (And don't worry. There's a happy ending!)

Once again, Brammer's spirits were lifted when more humans arrived.

And these humans also happened to be pet owners themselves.

Bless these people for actually having some supplies for the situation at hand. Although we also have to acknowledge that Brammer was doing an impeccable job.

Look at that face. That's the face of a cat whose genius plans have been foiled.

Brammer took to trying to find the animals' owners once again.

He asked every single person who came into the building whether the dogs and cat were theirs. No luck.

This might be my favorite update to the thread:

The "reinforcements" quickly realized the struggles that Brammer had been dealing with all along. Obviously, every human in this story greatly underestimated these creatures.

Here's further proof of that:

They locked the humans out. Is this a Homeward Bound sequel or something?

How is this even possible?

These dogs knew what they were doing. They had to have.

Were they tears of laughter or of stress? I'm guessing it was a bit of both.

Here's the solution the other dog owner came up with:

Finally, Brammer was given a break from animal duty.

And eventually, he updated the thread saying everyone finally made it back home.

What a rollercoaster! Is that not the greatest thread you've read in a long time? If you enjoyed the hilarious misadventures of Brammer and the Animals (working title for that children's book?), Brammer himself reached out to let followers know they can donate to The Trevor Project! In the meantime, share this with someone who could use a laugh today!