Guys Gets Tattoo That Triggers a YouTube Video to Play, but There's One Big Problem With It | 22 Words 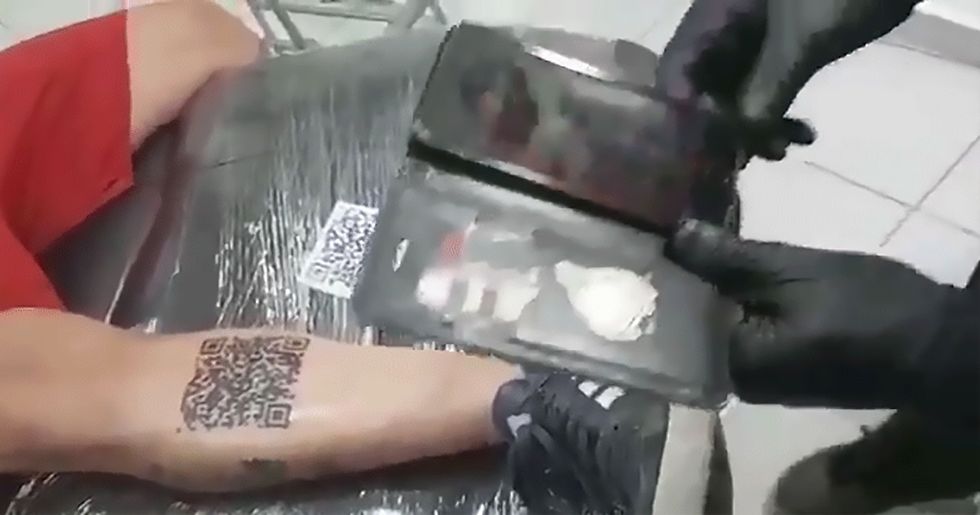 Guys Gets Tattoo That Triggers a YouTube Video to Play, but There's One Big Problem With It

Soccer fans are some of the most passionate, die-hard, insane fans in the entire world. In America, we often don't get to see the lengths that some fans go to celebrate their favorite players and teams because the sport is pretty low-key over here, but in Europe and South America, soccer is life.

People who regularly watch the World Cup know what I'm talking about. But it even goes beyond that. Fans of their regular local teams can make some... questionable decisions. Like this Newcastle fan who got so drunk, he punched a police horse. Or that time a West Ham fan stormed the field to take his team's free-kick against their rival club. (Best part is, the kick was pretty good).

So it should come as no surprise that some fans get their club's emblems tattooed all over their bodies. But one sports fan from Argentina may have gone a little too far.

Let's give some back story.

The Copa Libertadores is the most prestigious soccer competition in South America.

Imagine if Football was super popular in other countries, and they were all actually good at it too.

The Copa Libertadores is like the Super Bowl on steroids.

Meaning, if the winner of the American Super Bowl went on and joined a tournament with the winners of all the other Super Bowls. Why is this analogy so confusing? I don't know, American sports are weird.

I hope you're with me.

Basically, it's a Tournament of Champions from a bunch of South American countries.

Europe has a similar competition that you may have heard of called the Champions League.

It's currently happening right now, and so far, it's been insane.

So back to our tattoo friend.

His team, River Plate (don't laugh), somehow managed to get to the finals of this huge competition.

But there was a catch.

They had to play their biggest rivals. The drama of this is almost impossible in American sports.

Most rivals play in the same division, so they have no chance of making it to the championship together.

But think of a Packers/Bears Super Bowl or a Giants/Dodgers World Series. It would be insane.

River Plate wins. They beat their biggest rival in the biggest competition in history.

The score was 5–3 over two legs, and fans in Argentina went crazy.

Here's a video of some of the crazy celebrations.

And if you don't speak Spanish (I don't either), then it's all just a bunch of exciting gibberish. Let's get to that tattoo though.

A River Plate fan (who is anonymous), wanted to get a tattoo to commemorate the game.

Maybe a tattoo of his favorite player, or of the club logo?

Maybe even a tattoo of the trophy the club won during the competition? You know, something tasteful.

Nah. Instead, he got a tattoo of a link to a YouTube video.

Yeah. More specifically, a QR code that sent someone to a YouTube video with highlights from the game.

There these weird little boxy things that brands tried to make cool for a while until Snapchat actually found a use for them?

Check out the tattoo in action.

A River Plate fan got a QR code tattooed on them that shows the Copa Libertadores final goals against Boca Juniors… https://t.co/prroJULHyH
— Marathonbet (@Marathonbet)1554997115.0

I know what you're thinking -- the tattoo bled, and now you can't use it to scan anymore.

No, it's way better than that.

Fans all over the world were sharing how dumb (or clever) they thought this tattoo was.

Including fans of River Plate rival, Boca Juniors (the team that lost).

So Boca fans came up with an ingenious plan to ruin this guy's brand new tattoo.

It's against YouTube's terms of service to upload copyrighted material.

Which, you know, a game of soccer definitely is.

So Boca fans needed to come up with a way to get the video removed.

But the original poster wouldn't take it down. So instead...

Fans reported the video for copyright so many times, YouTube took notice.

They quickly took the YouTube video down, and now the tattoo doesn't scan. Which, depending on which side you're on, is the funniest or meanest thing to ever happen.

The internet loves it.

At least some people saw it coming.

People are out here mourning.

I would be too if I spent money to get an ugly black box tattooed on me.

Hey, at least he can cover it up?

With another, different black box? I don't think you can change QR codes.

Even the original people who ran the story are laughing.

The video has been removed from YouTube because of copyright issues. 😅 The barcode now leads to nothing. 😬 https://t.co/CRqaHXFdTg
— Marathonbet (@Marathonbet)1555058870.0

That's just cruel... they did this to this poor man.

It means life is unfair.

Do we think this guy is a big thinker?

Answer: probably not. But hey, at least his team won and he's got a great story.

Some advice, as we part ways.

Or, how about, just don't get this kind of tattoo?