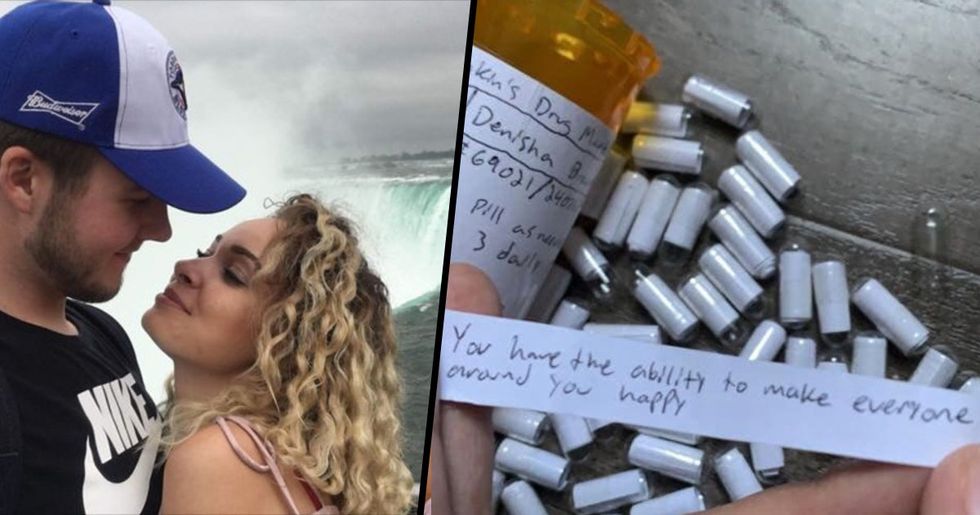 Guy's Homemade Gift for Girlfriend With Anxiety Is so Sweet

We may be talking about it more, but mental health can still be a tough and sensitive topic that people struggle to open up about. For anyone going through a bout of poor mental health or a mental illness, it can feel extremely lonely and can put a strain on relationships.

But, often, it's the little pick-me-ups that can feel great, and small gestures of kindness that can help somebody struggling with their mental health.

One woman, who suffers from anxiety and panic attacks, has gone viral after sharing a snap of her boyfriend's homemade gift to her for their anniversary - showcasing his thoughtful and creative way to help her feel better.

Keep scrolling to see the heartfelt gift and how it's helping her get through those difficult days.

Mental health is still a tough topic to open up about.

It can be hard to open up about how we feel, especially given the history of harmful stereotypes and attitudes towards mental illness.

Though in recent years, we've gotten better at talking about it...

There's very much still a stigma that's alive and kicking, especially when it comes to illnesses that fall outside of straight-up anxiety or depression.

Depression and anxiety disorders are among the most common mental illnesses experienced by people in the U.S.

According to the ADAA, they affect around 40 million adults in the country.

The good news is, anxiety and depression are very treatable.

From medication, therapy, and other methods such as meditation, there are several ways to manage the symptoms.

But sadly, many people don't seek any form of treatment.

Only thirty-seven percent of those suffering receive treatment.

So, it's ever-more important to check in with your friends, partner, and family.

And seeing as it's highly likely we all know someone with depression or anxiety, showing someone who is suffering that you care can make a huge difference.

One boyfriend has turned to arts and crafts to show his girlfriend he cares.

Riley Rankin has created a thoughtful and heartwarming gift for his girlfriend, Denisha Bracey, from Halifax, Nova Scotia to try and help her cope with her anxiety.

Bracey had been dealing with panic attacks and anxiety over the summer.

Though she has been struggling with mental health issues since she was a teenager.

Rankin has supported her through thick and thin.

He's remained by her side through the difficult days.

They celebrated their second anniversary in July.

And Rankin wanted to do something thoughtful for his girlfriend to mark the occasion.

So he got his creative head on...

And he came up with an idea that both genius and adorable.

He handmade her a personalized prescription bottle filled with “love pills."

It may sound odd at first, but the idea is actually really sweet...

Each capsule is filled with a message of love and encouragement.

The heartfelt notes vary from motivational messages, good qualities about Bracey, or something that makes her happy.

Overjoyed by the surprise, Bracey posted pics of the gift to Facebook.

In the now-viral post, originally uploaded in July, Bracey gushed over her thoughtful boyfriend. “Every pill capsule is filled with a little note that says something loving or sweet, something that will make me happy, or a good quality about me," she wrote.

The handwritten notes are utterly adorable...

Some examples of the messages on the notes include “You should run for Miss Universe because DAMN," “Be proud of yourself, you are amazing and think of all the things you’ve accomplished!" and “Your positivity is so refreshing and inspiring."

Although Bracey did admit she was a little confused about the gift at first...

Speaking to HuffPost, she explained that when she first saw the gift, she was “very confused" because she thought Rankin was giving her medication.

But after realizing what the gift actually was, Bracey says she was "touched."

“Once I read the label and opened it up, I was really overwhelmed because I couldn’t believe he took the time to make such a wonderful gift for me," she said. “We love making each other DIY gifts but this is definitely the best one yet! I cried a lot!"

She says she hopes the gesture "inspires" others...

On her Facebook post, Bracey explained: "I hope this inspires some people; make something nice for someone you appreciate. Gifts don’t have to cost $100 to be meaningful, a couple of bucks and some creativity (or Pinterest surfing) and you’ve got the best gift ever!"

After posting the snaps of the thoughtful gift online, people branded Rankin as a "keeper."

"That is rad! What a great guy," wrote one Facebook user, while another said: "Love it! Better hang on to him!!"

It's also spurred others on to make a similar gift for their loved one.

The comments were flooded with people asking how they can re-create the thoughtful gift. Seems like the couple are well and truly smitten. Such a sweet gesture.