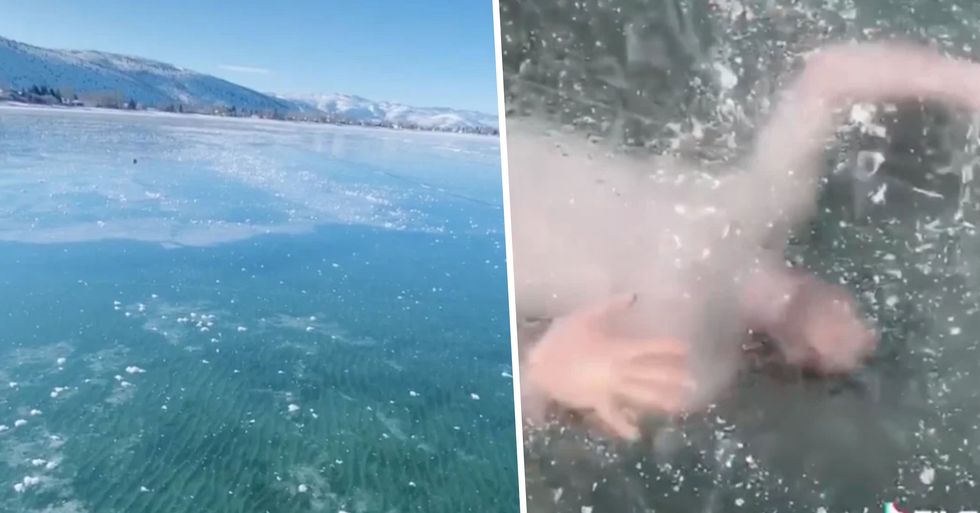 An avid bucket lister found himself in a near-death situation after he dived into an icy, frozen-over lake.

His ordeal, which was caught on camera, was posted to social media and quickly went viral, horrifying thousands of people all over the world.

Keep scrolling for the full story, and to watch the shocking footage for yourself...

We all have a bucket list of some sort.

A list of life experiences and achievements, a bucket list captures a person's ultimate wishes and challenges to complete in their lifetime.

Bucket lists can vary dramatically depending on the person...

Most people are pretty adventurous when it comes to writing up their bucket list - Activities such as skydiving, bungee jumping, and Great White Shark diving usually make the top of the list.

And others opt for more scenic experiences.

Rather than hurling themselves out of airplanes, some people would rather experience famous landmarks and natural wonders, such as visiting Paris' Eiffel Tower or the famous canals of Venice.

Many adrenaline junkies out there get their thrills from partaking in dangerous, and potentially deadly, sports and activities.

These people literally risk their lives for the thrill.

Many enthusiastic bucket listers often put their lives on the line to complete their dream - Whether it be dangling off cliff edges, rafting in treacherous waters, or scaling skyscrapers with their bare hands.

And, luckily for our bored, self-isolated minds...

These bucket listers often film their dangerous exploits and share them with the world.

Social media is a cesspit of people partaking in precarious stunts...

Because, as the saying goes...

And this rule applies to one enthusiastic adventurer who recently encountered a near-death experience.

Jason Clark dedicates his life to adventure and regularly shares his exploits with the world.

Where he films himself completing a variety of different challenges and adventures.

But Jason's latest adventure could well have been his last...

And the entire thing was caught on camera.

Jason had one particularly challenging quest on his bucket list...

Oh, and some freezing cold water.

And, of course, Jason wanted to conquer these freezing waters.

The lake had fully frozen over...

But this wasn't about to stop Jason from diving into it's freezing depths.

His dog got in first for a test-run...

"Yes, I pulled her out right away. Yes, she jumped right back in."

But then, it was Jason's turn.

And he didn't fare as well as his dog. He can be seen tentatively climbing into the broken ice while taking deep, slow breaths.

It's painful to watch.

Jason then takes the plunge, and swims under the frozen water.

He bravely swims a few meters...

While still under the ice, Jason can be seen scraping against the surface, evidently trying to resurface.

He swims around, clearly trying to locate the opening to the frozen water.

And, in chest-tightening scenes, Jason turns back several times as he desperately searches for an escape.

Finally, he finds the opening.

And dramatically resurfaces, with a look of sheer panic on his face and gasping frantically for air. "I nearly f****** died."

Where he explained: "I have never been this close to dying. I didn’t think my eyeballs would freeze so quick. The surface of the water where the hole was didn’t look any different than the bottom of the ice. When I flipped around and felt solid ice I thought I was at the hole. When I wasn’t that’s when I decided to head back and follow the dust I kicked up."

Jason was in a dire situation.

He continued: "I then tried to break the ice with my back, you can see in the video. I don’t know what made me turn around one last time. I was so short on breath I couldn’t really see anymore. I had accepted that was it and I wasn’t going to make it. I swung my hand at what I though was just a lighter spot of ice and my hand came through. I then got a ton of energy to stand up. It took 2-3 breaths to regain my vision after resurfacing."

Jason's girlfriend, who was filming his ordeal, had no idea what was actually happening below the surface.

He explained: "When there are scary moments I joke a lot. She genuinely thought it was another one of my jokes and didn’t recognize the severity of the situation."

Yet, despite his terrifying ordeal...

Jason attempted his dive for a second time, which was luckily much more successful.

If, unlike Jason, you're more into safe vacation adventures, keep scrolling to see some stunning locations that could well be your 2021 get-away...