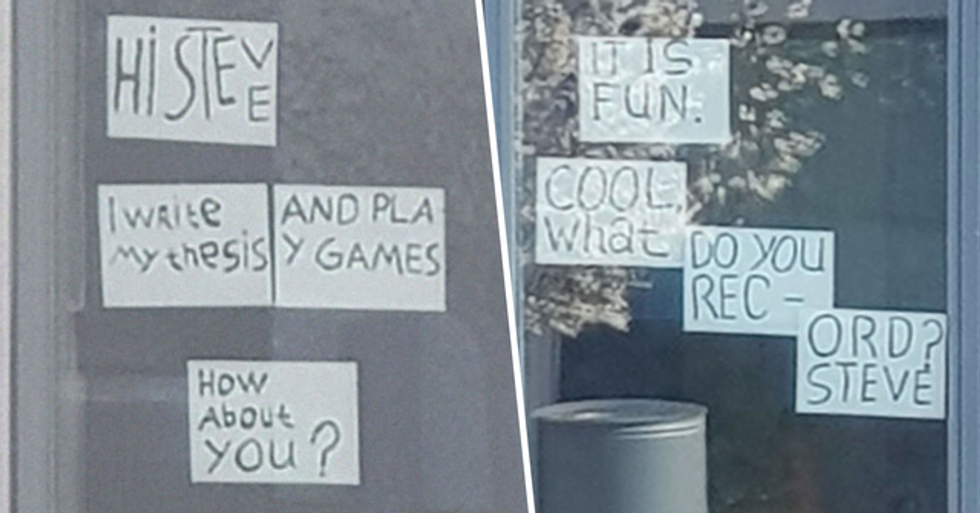 After catching his neighbor's eye a couple of times, a man decided to start communicating with him by sticking hand-written messages to his window... And the response he received was amazing.

Millions of us are currently remaining self-isolated...

Social-distancing measures mean that we are to be confined to our homes indefinitely.

And, while some of us are lucky enough to have family members, loved ones, or roommates to self-isolate with, others are having to ride out this pandemic by themselves.

It can be incredibly isolating.

So those who are riding out the pandemic alone are turning to their neighbors in the hope of a little human interaction.

And, while most are having conversations over their garden fences...

Others are hosting lengthy chats the old fashioned way - By pen and paper.

A Reddit user, only known as Steve, has recently gained viral attention for his heartwarming chat with his neighbor.

Before the pandemic, Steve and his neighbor had never even met, let alone spoken to each other. But, after they caught each other's eyes a few times through their windows, Steve decided to strike up a conversation.

Steve, who is from the United States, is currently living in Denmark to study Computer Science.

As a result of his studies, Steve finds himself sitting at his computer day in, day out... As does his neighbor. Speaking to Bored Panda, he explained that they’d “both just sit at our computers and work for days on end."

And one day, Steve had the inspiration to reach out.

He had huge windows and a plentiful supply of scrap paper to hand and just thought to himself, “I kind of want to say hi and see what he’s up to."

He started writing messages and sticking them to his window...

And, from that, a totally unexpected friendship quickly blossomed.

Steve decided to share his new-found friendship with the world.

Taking to Reddit, he explained: "So I sit at my desk all day and do school work/work-work, and there's a guy in the apartment building next to mine that does the same. We sometimes make eye contact. Yesterday I had enough; time to make some friends, social distance style!"

Steve initially reached out with one simple message.

He taped his message to the window that faced out to his neighbor's place...

And sat back and waited, hopeful that the stranger would see his homemade sign and respond.

It worked! The next day, Steve spotted a new message in his neighbor's window, which read: "Me? Sure!" before giving his own name, which Steve has decided to keep anonymous.

Steve quickly got to work with writing up a reply...

And he decided to get to know his new friend a little better by asking, "What do you do?"

But then, he found out something remarkable.

His neighbor across the street is also writing a thesis, and he too plays videogames in his spare time.

It turns out the pair have a lot in common.

His neighbor then continued their interaction...

By asking, "What do you record, Steve?"

Because Steve has a much sought-after American accent in Denmark, he frequently records voice recordings with equipment visible to his neighbors from the window.

And his new friend had evidently been curious as to what he was recording. So Steve replied, "Hack The Crisis. What do u study?"

And, making reference to Steve's recording, he replied:

"Cool hackathon. Hope you get a nice result." He then referred back to his degree by writing: "Techno Anthropology. You?"

Steve came back with a lengthy reply.

"Thanks! We didn't win but it was fun. Cool study! I study comp-sci [computer science]"

It is uncertain as to whether their conversation went further from here...

But it is undeniably an incredibly uplifting thing to say. Faith in humanity - restored. For more on how people are coping with the lockdown, keep scrolling to read about the lonely old woman who would write letters to her neighbor's dog...