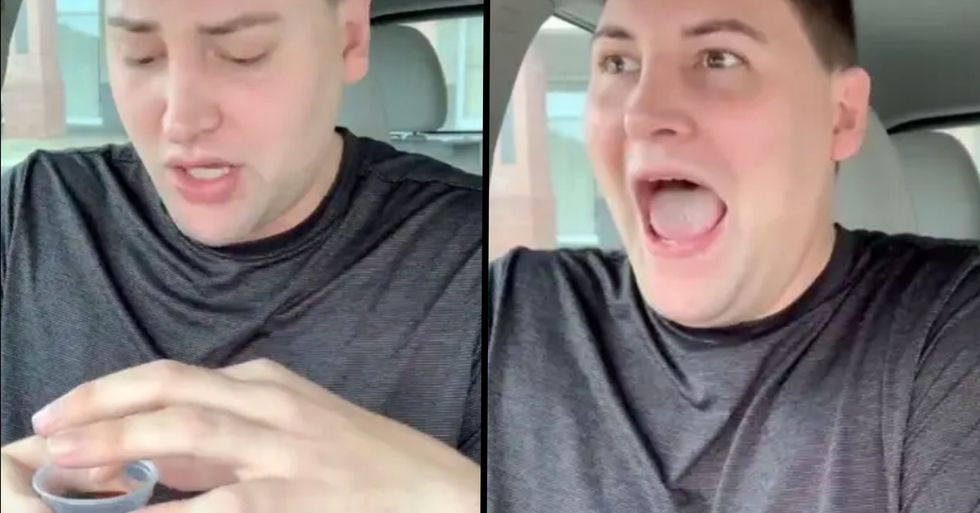 Occasionally the internet can be a bit too much to handle, sometimes the most innocent of youtube searches can get pretty peculiar once you're 5 videos deep. If you know, you know.

When it comes to social media, no trend is out of the question. All it takes is a spark of something weird and wonderful and next thing you know, it's all over Facebook.

Keep scrolling to read about the latest trend... you might not want a Chinese takeaway anytime soon.

It's a pretty weird world.

Do you ever look at someone and think, yep, they seem pretty normal. Well chances are, they're likely to have done at least one of these internet fads, even if they don't want to admit it. Keep scrolling to see the top ten.

We're going in strong with the first trend. People seem to love showing their butts in front of beautiful scenery, which you'd think would get flagged from most social media platforms. However, people seem to be getting away with it. You can still see the posts on the Instagram account Cheeky Exploits. If that's your thing.

It's probably best to leave this one out of your to-do list.

You'd think common sense would deter most from attempting the hot water challenge, due to the evident risks of this viral trend. Many people got seriously injured taking part in this challenge, and doctors were forced to warn people against doing it. The worst part was when an eight-year-old girl died after drinking boiling hot water with her cousins after watching other people post about it. The trend thankfully simmered down after this happened. Let's keep it that way.

The salt and ice challenge.

Yep, it's just as bad as you're thinking. This trend first came about in 2012 and is quite a low point for the human race. People decided it'd be fun to put ice and salt on various parts of the body. This might sound completely harmless, but when the two are mixed together, they create a chemical reaction that causes something similar to frostbite. Not so harmless after all.

You're a mean one, Mr. Grinch.

This trend seriously baffles me. For some unknown reason, fur nails seem to have entered the trending circle. Luckily, most people have realized how disturbing it is to add fur to places that shouldn't have fur. People have made it clear they were only using faux fur, which means the only things that were harmed in this trend were our eyeballs.

People are doing what now?

Instead of using condoms to protect against unwanted pregnancies or STDs, people are using them to... I don't even know what to call it. People are snorting them up their nose to pull them out of their mouths. Apart from the obvious choking risk, this can also cause infections and nasal rashes. This trend seems to have died down, so let's hope condoms are now being used for their intended purposes.

I'm pretty sure everyone at least once in their life has packed a bag and threatened to move out, only to come back 5 minutes later because you're hungry... and 6. That's quite a normal part of growing up, but nowadays, kids are taking to social media to voice their frustration with their parents. The "parent shaming" trend has seen kids complain about parents being embarrassing, or not buying them what they want, anything goes. There has been a counter-trend of "child shaming" that sees parents disciplining their children on social media.

After spending even the shortest amount of time on social media, you get an understanding of how strange people can be. It's like the internet offers free reign to act as creepy as possible. This trend actually started in the Victorian era, where people would prop up their dead relatives in order to take pictures with them as a way to remember their loved ones. For some strange reason, people thought it'd be a great idea to bring it back. For some people, it might be part of their mourning process, but personally I think the whole selfie craze is getting out of hand.

There have been countless strange beauty trends over the years, from shaving off your eyebrows, to using beetroot as blush. The 100 layer challenge is definitely a strange one, it requires people to wear 100 layers of whatever they want. That could be 100 t-shirts or 100 layers of lipstick, which I have to admit is oddly satisfying to watch it being removed.

If burning yourself with salt and ice, or drinking boiling hot water wasn't enough, people are actually setting themselves on fire. A new internet craze has seen an increase in videos where people pour flammable liquid on themselves then proceed to set themselves alight, for no other reason than getting a few likes on social media. I think the world has finally gone mad.

Most of us have been told during our teen years not to pop our spots, and while that advice might have stuck, it's still satisfying to watch the professionals go at it with their pimple tools. Keep scrolling to see some of the best social media challenges of the decade.

On the floor, on a wall and even in a freezer, there's no place out of reach when it comes to planking

If you don't know what the Harlem Shake is, where have you been all your life? Dezmond Moore sums it up pretty well. "The Harlem Shake is a 30-second video that begins with one person in a mask or helmet on, dancing to the beginning of “Harlem Shake" by Baauer surrounded by people not paying attention. At 15 seconds, the song features a bass drop and that is when the video includes a jump cut to the entire crowd dancing wildly usually using props and costumes."

This craze started off when golfer Chris Kennedy was nominated by a friend to do the challenge and was asked to pick a charity. This soon turned into something positive for ALS. It wasn't long before celebrities got involved which caused the challenge to sweep through America.

The viral food challenge involves people recording themselves, eating a spoonful of ground cinnamon in under 60 seconds without drinking anything. It has been around for 15 years but increased in popularity again in 2012. But the latest trend is, strangely, making guys drop their pants.

Recently a rumor has been going around TikTok that men can taste food with their balls. Yep, this might actually top all the other trends out there for being the most bizarre.

How did this start?

This all began when a girl on TikTok talked about a 2013 study that said men have taste buds on their balls.

Not only are balls meant to have taste buds, but they can apparently also detect flavors.

What a time to be alive.

One guy decided he was up for the challenge, filming his reaction on TikTok. Keep scrolling to watch the video.

He had some interesting results.

Apparently Soy Sauce can be detected through the private parts.

It wasn't just the one guy.

This guy claimed he also tasted something. What he tasted wasn't clear in the video, but it was definitely something.

I don't believe it.

Don't worry, a hot doctor has come to settle it all.

He thought the videos were hilarious.

"Research shows that there are taste bud receptors all over the body, and it's speculated to be for fertility," the 31-year-old foot and ankle surgeon said.

It all makes sense now.

"Just because you have taste buds in that area doesn’t mean you can physically taste those flavors. Your body might receive it, but you won’t have a perceptive taste of sweet, sour, or whatever flavor," he said.

It turns out you can't actually taste anything with your privates. Who'd have guessed? Also, just in case it wasn't clear enough, please don't try those internet trends at home.