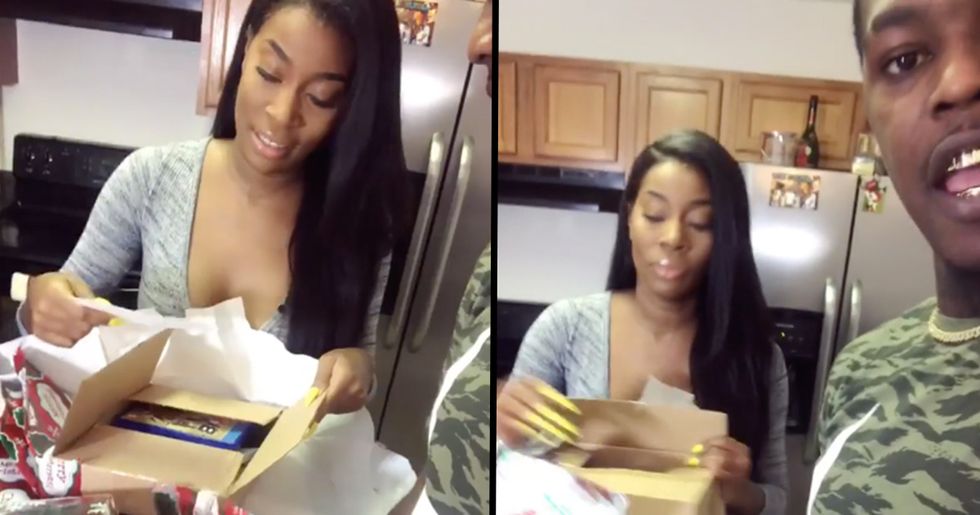 Christmas has come and gone and the best presents of 2018 have been delivered by Santa and his band of parent-shaped elves. But some years you just miss the mark. And some years, well, you kinda miss it on purpose. Whether it be to spite a roommate or show a loved-one they're not so loved any more, sometimes you just have to give someone a good ol' lump of metaphorical coal.

And that's exactly what happened in this year's Annual Christmas Viral Video™. One boyfriend got his girlfriend something a little too sarcastic, and it may have just cost him his whole relationship because she does NOT seem thrilled. It's really just the case of "you get your girlfriend something dumb for Christmas, and in return, you get dumped."

Check out the video below, and let us know what side of the fence you sit on because we're always oh so curious.

It starts off with a fun little joke.

Merry Christmas honey. I paid for the electricity all year, so here's a little reminder.

But it's okay. There are other boxes.

Surely her real gift is inside...

For those that can't read it, it says "Car Note". I guess he's paying her car payment too! He ends every gift with a smug little "Merry Christmas".

I wonder what this one could be!

Well yeah, I guess we had to see that one coming. Does he just pay for everything? And if so, I don't see a ring! But of course, there's one final present. I wonder if this one is actually a real present, or another note.

Just another note. I don't have a very good feeling about the longevity of this relationship!

Check out the full video here.

Because it wouldn't be Christmas without a seriously funny prank gift. Is it even a prank if he doesn't actually get her anything to go along with it?

The internet is loving this viral video.

I thought that too! Or like a nice note, or something!

It keeps getting funnier.

Watching her expressions is killing me. She's over it after the first box.

Uhhhh I'm not sure you'd be saying that if he was your boyfriend!

What did she even get him??

We may never know...

She's coming for him in his sleep.

And tbh I don't really blame her. It's one thing to not get anything because it's been an expensive year, but this is a 10/10 troll and I would not be happy!

If he's already paid for all of that, shouldn't he make it official?

I hope they've been dating for a while, because if not, I think this relationship might just be on its last legs.

Where do you land? Because it's not even close online.

Maybe there was a sneak gift in there after all?

It definitely is possible!

There's definitely something in that box, and it does look like a blue case. But it wasn't even acknowledged in the video!

Maybe she thought it was coming later!

I hope she wasn't expecting anything specific, because it sure as heck wasn't in that box!

Maybe she deserved it.

This seems like a possibility, but he seems too happy for that!

Get ready for Christmas 2019 when she gives him all the chores she's done and the times she's held his hair back when he's throwing up from binge drinking. Or is that just my relationship?

Although, maybe she'll come around and think it was pretty funny.

But... I kinda doubt that'll happen.

The one true Christmas present all along.

Maybe this was the goal the whole time. Sever ties and start 2019 off right. With a little extra dose of freedom. #AmericanFlag

Here's a dramatization of what already happened yesterday morning.

I'm not sure who this one is directed at.

Some people feel like this should be the norm.

Yup. This was me this year. I asked for a student loan payment.

The guy in the video has a death wish.

He may have underestimated just how mad his girlfriend was going to get.

I don't know if this is a religion joke or a dirty joke.

But either way it's gross and hilarious.

These documentaries are getting very realistic.

Was that a good thing or a bad thing?

Who would have thought people would be on her side?

Although I guess it was pretty rude...

But hey! Sometimes you got to make a point and have a little fun while doing it. What do you think? Who's in the wrong here? Or are they both? Or is this just all in good fun. Let us know!