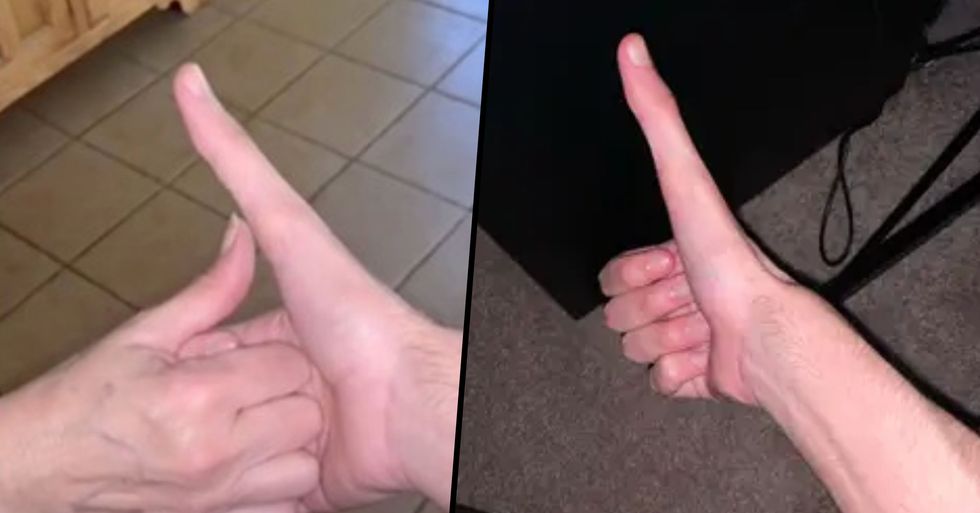 Guy's Super Long Thumb Has Gone Viral and It's 100% Real

A guy has gone viral on TikTok for his super long thumb and, not only has he proved it's real, but now he's opened up about exactly why it's so long...

But he has a very not-so-average quirk.

Jacob has an insanely long thumb.

And of course, the feature made him famous in on TikTok.

Many questioned whether his extra-long thumb was the work of some clever photoshopping or a secret filter.

But, it seems it's one hundred percent legit.

Using his newfound TikTok fame, Jacob has revealed more details on why his thumb is the way it is.

And people have been left shocked, to say the least.

A ton of people all over the world are currently addicted to TikTok.

What starts out as a download out of mere curiosity can quickly escalate into scrolling for several hours straight at 4 am on the “for you" page. If you know, you know.

Within a few years, it has become one of the world's best-loved apps.

While we were stuck inside because of the pandemic, many took to TikTok in order to keep themselves entertained.

From The Doja Cat Challenge to the Fake FaceTime Call, we just can’t seem to get enough.

The number of infectious dance routines on that app is unbelievable.

TikTok has made many people influencers in their own right.

With some boasting millions of views on their video.

And Jacob Pina is one of those people.

The twenty-one-year-old has racked up an impressive following on the app.

And there's one very specific reason for this newfound fame.

One of Jacob's thumbs is insanely long - 5-and-a-half inches - to be specific.

It has since been dubbed as the extendo-thumb.

And Jacob regularly posts videos showing it off to his followers.

Many people speculated whether it was fake or not...

But Jacob has since shut down these claims in his videos.

He has gone on to show how he can make his thumb so long.

And explain why it looks the way it does.

Right from the start of his TikTok stardom, Jacob admitted reactions were mixed from viewers.

"When I posted my first video to TikTok, I had no clue I'd get this sort of attention from it. People have mixed reactions, like disgusted, freaked out, or curious," he said.

And they continue to pour in...

From the horrified to the intrigued, the skeptical to the amazed, there is no shortage of reactions in the comments.

So, why is his thumb so long?

Well, he first discovered the quirk back in high school.

Usually, his thumb is around 2 inches long.

But, when he dislocates it, it grows in size to around 5-and-a-half inches.  "I just dislocate my thumb, by forcing it out of its socket, to make it appear longer," he explained.

"My doctor says it's abnormal but can't officially link it to any known medical conditions."

Jacob says his thumb has never hurt or given him any pain.

It's simply something he's just able to do.

Either way, he's been having fun making entertaining TikTok videos.

Check out his Tiktok here. And if you want more TikTok-related news, scroll on to read about the new trend that's causing some people serious injury...